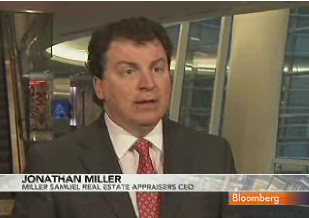 The Bloomberg coverage was in reference to my contribution to the report via interview where they matched me up against their analyst Xavier Wong, Head of Research for Greater China and Hong Kong.

The frozen market in Manhattan in the first half of 2009 gave way to a much stronger second half of the year. By the summer, the market began to see a recovery in sales activity following an improvement in economic confidence prompted by a revival in the stock market.

While the market has undoubtedly improved compared with last year, we ought not to get too excited. The recovery of late 2009 was a short-term uptick, due in large part to a release in pent-up demand. My view is that the surge in demand is not the start of a rising housing market. While sales are up sharply, prices have moved “sideways.”

I have some lingering concerns for the New York market in 2010. The market has been aided by government stimulus measures – tax credits for first time buyers, in particular. This package will expire in mid-2010. While the US economy is growing, the high rate of unemployment – around 10% and somewhat higher locally – as well as a tight mortgage lending environment do not provide a firm basis for ongoing growth in house prices.

A real fear for 2010 is rising mortgage rates, currently at near record lows. The potential for growing foreclosures, which were not a problem in 2009, is another real factor.

One segment of the market that has seen a noticeable uptick has been international demand, where the weak dollar has prompted interest from Asia, Europe and South America. Demand from South Korea has also become more noticeable.

Looking outside New York, both Boston and Washington DC have also improved, with rising resale volumes in both markets. On Long Island, the Hamptons luxury second home market has surprised everyone with its resilience to date. As a discretionary market, there was general concern that this region would see large declines in prices and sales from the 2008 and early-2009 market turmoil. In fact, both sales and price trends have remained in line with the Manhattan market.