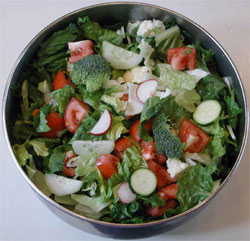 Bernanke spoke at a luncheon yesterday and its been a while since he spoke about the outlook for the economy. The regional Fed presidents have been doing all talking lately. His transparent communication approach to Fed policy seems to be working (although, in order to remain true to transparency, we should be told his lunch selection so we can factor that into his commentary). Arguably, by talking up or down the economy, the Fed has been able to stop tweaking rates every month. Now the Fed is working hard to assure investors that the economy is doing well enough to avoid rate cuts in the near future, by raising concerns about inflation. Weaker housing market conditions [WaPo] [1] are not enough on their own to push the economy into a recession.

This contradicts the commonly held assumption that the inflation has been held in check and the economy weakening, forcing the Fed to have to cut rates by the middle of 2007. The probability of a mid year rate cut is rising [Clev Fed] [2] as investors look further out through 2007.

In a contrast with the widely held view on Wall Street that slower economic growth will lead to interest-rate cuts, Federal Reserve Chairman Ben Bernanke offered an upbeat assessment of the nation’s economy, warning that tight labor markets could put more pressure on wages and prices. Many investors point to declining housing construction, mixed news on holiday sales and a tame reading on inflation as indications that the economy is weakening, inflation risks are fading and that the next move by the Fed will be to cut interest rates, perhaps as soon as next spring.

The Federal Reserve called a halt to its long string of rate hikes in August because it believed the economy would slow and the inflation picture would improve and three months later this forecast still seems about right, Fed chief Ben Bernanke said Tuesday. In a rich speech examining most of the hot topics captivating Wall Street economists, Bernanke said the economy is still on track to expand at a moderate pace over the next year without slowing too much.He said the inflation is already “better behaved of late” and should continue to slow gradually. Much of his speech was used to gently dampen two of the major fears about the outlook – that the housing market would push the economy into a full-fledged recession, or that inflation pressures were like a smoldering campfire, seemingly controlled but ready to burst up in the next strong wind.

Signaling that the Federal Reserve was not inclined to lower interest rates any time soon, its chairman, Ben S. Bernanke, said yesterday that while economic growth should rebound next year, inflation remained “uncomfortably high.” In a speech that offered a wide range of prospects for the direction of the economy — from an unexpected surge in growth to no growth at all — Mr. Bernanke painted a generally sanguine picture. So far, he said, the economy had slowed in line with Fed’s forecasts, and inflation had “been somewhat better behaved.”

The nation’s central bank is growing more confident that the U.S. economy will slow gradually in a way that should cause inflation to decline without tipping the nation into a recession, Federal Reserve Chairman Ben S. Bernanke said yesterday. “Over the next year or so, the economy appears likely to expand at a moderate rate, close to or modestly below the economy’s long-run sustainable pace,” Bernanke told the National Italian American Foundation in New York, in his most extensive remarks on the economy since July. Inflation “is expected to slow gradually from its recent level.”

Federal Reserve chairman Ben S. Bernanke said the US economy will pick up in the coming year and emphasized that inflation remains his greatest concern.

I find it annoying, however, that whenver Bernanke is making some sort of significant statement that impacts housing, Greenspan is quoted about the housing market [BW] [7] at the same time. (Do they share their calendars?) He is about to publish an analysis of the “serious dispute” over the true effect of mortgage wealth on consumer spending.

So Bernanke’s take is basically this. Housing and the economy are not expected to drop like a stone next year and if there is a rate cut, its likely to be later in 2007.

Which raises a more important question: Did he have a salad for lunch?