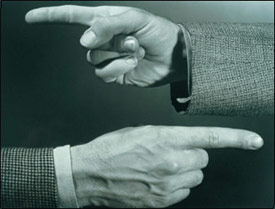 A cyclical market goes through, well, cycles. That is to be expected, hence the name cycle. However, when the cyclical asset is deeply personal, like residential housing, there is always seems to be a need for the market participants to blame someone else for its troubles. This idea resonated with me last year as the housing market began to shift away from its frenzied (frankly, scary) pace and the media became the scapegoat for the problems, then real estate brokers, and on and on.

I would have thought much of this would have ended by now, but a year later, it hasn’t. I think thats the sign that we are still in transition because few seem to be in agreement on why and where we are headed. I came across this article the other day that inspired this post:

Here’s a small sample of things to blame for the housing market downturn if you run out of ideas yourself: