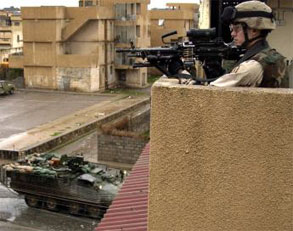 The real estate market is booming in Baghdad [Mercury News]. [1]

Fixer-uppers, namely those that have bullet or bomb damage are among the most sought after properties now.

Despite the war and suffering, the economy is in better shape than before. One of the brokers indicated many of his customers made their money by looting after the fall of the old regime.

Unfortunately, a number of real estate agents have been murdered by insurgents. “Real estate is hardly the only business that carries a potential death sentence. Liquor stores and hair salons are targeted for being against Muslim law, restaurants for feeding policemen, and government offices for cooperating with the United States.”