Although we perform appraisals in Westchester [3] it’s been a while since I wrote about the market. I just did the keynote at Westchester Real Estate, Inc.’s [4] annual award luncheon and got some great feedback from the brokers in attendance.

For perspective, and aside from the last two years, annualized sales levels in 2010 are below every year since 1993. In fact, the annualized sales level for 2010 is exaggerated since the first quarter benefitted from elevated sales activity caused by the federal tax credit which will not continue to skew sales higher in the second half of 2010. 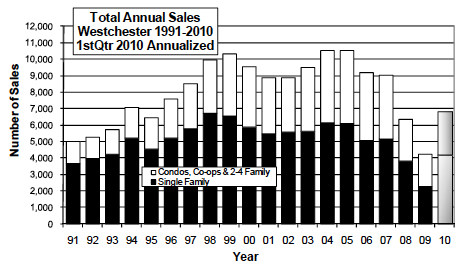 Despite a 54% increase in sales activity in 1Q 2010 over the prior year quarter, sales listing inventory actually increased 3.9%. In other words, new listings entering the market outpaced the properties being sold off. With the gains in sales, we would expect a decline in inventory over the same period. 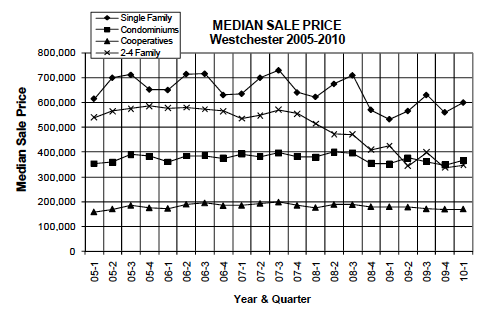 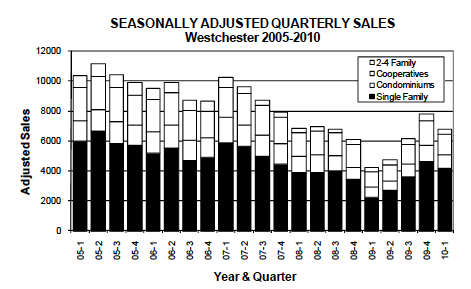 Here’s an excerpt from the WPAR report.

Real estate firms participating in the Westchester-Putnam Multiple Listing Service reported 1,313 closings of Westchester residential property transactions in the first three months of 2010, an increase of 54% from the same period a year ago. Putnam County closed transactions were up by 28%. The closings largely reflected marketing and contract activity that took place during the late autumn and closing months of 2009.

Although the year to year percentage increases in sales were high in all categories of housing tracked by the MLS, it must be noted that they were calculated against the very poor sales base of the opening months of 2009. At that time total sales were less than half those of the peaks posted in 2006 and 2007. The 2010 volume was closer to that posted at the start of 2008 when the real estate recession first took hold in our area. Seasonally adjusted1, Westchester’s 2010 first quarter sales were equivalent to an annual sales rate of 6,830 units; that approximate annual volume was last experienced in 1995 and 1996.