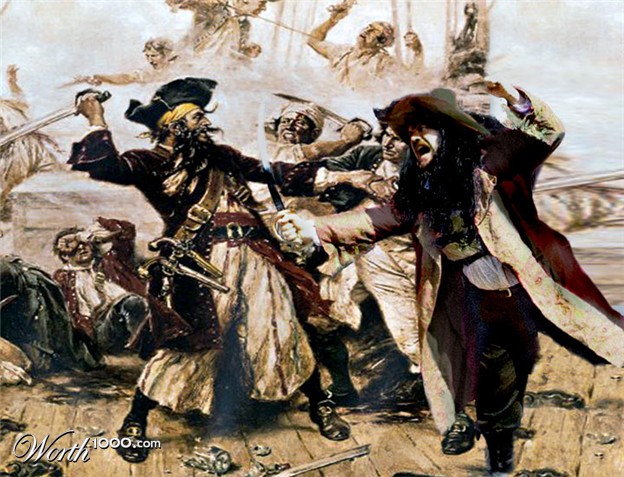 This year, Talk Like a Pirate Day falls on the same day as the Jewish New Year of Rosh Hashanah [2]. In deference to the latter, it was suggested to me that the phrase “Oy, oy, matey”, might be appropriate.

Here’s the story behind the madness of Talk Like A Pirate Day [3].

the day is the only holiday to come into being as a result of a sports injury. He has stated that during a racquetball game between Summers and Baur, one of them reacted to the pain with an outburst of “Aaarrr!”, and the idea was born. That game took place on June 6, 1995, but out of respect for the observance of D-Day, they chose Summers’ ex-wife’s birthday, as it would be easy for him to remember.

At first an inside joke between two friends, the holiday gained exposure when John Baur and Mark Summers sent a letter about their invented holiday to the American syndicated humor columnist Dave Barry in 2002 [4]. Barry liked the idea and promoted the day. Growing media coverage of the holiday after Barry’s column has ensured that this event is now celebrated internationally, and Baur and Summers now sell books and T-shirts on their website related to the theme. Part of the success for the international spread of the holiday has been attributed to non-restriction of the idea or trademarking, in effect opening the holiday for creativity and “viral” growth.

A matrix of historical posts swabbing the Talk Like a Pirate Day deck:

And here’s the Talk Like A Pirate Day [9] news feed.

This whole viral phenomenon each year is simply insane and makes me say “shiver me timbers, me hartey’s” and remember, when you google today, make sure you use the Google Pirate search page [1]. The original site is Talklikeapirate.com [10] but my friend runs the runner up ranked site on Google called Talklikeapirateday.com [11].

You can translate everyday language into pirate speak [12].