Ok, I am exagerating just a little here, but I couldn’t resist. I get the impression that the subprime market is some huge tsunami and I happened to walk really (emphasis on really) far out from shore. So I thought I would try to get my arms (no, not mortgages) around the visual.

The Wall Street Journal went all out and created a series of terrific interactive graphics of the subprime situation. [1]

Map 1 shows the concentration of subprime mortgages as a percentage of all mortgages. What’s the deal with Sharon, Pennsylvania? The concentration of loans in the west coast is amazing. McAllen, TX, Memphis, Richmond and Miami are no surprise, though. These are regions that boomed economically. Chicago and New York too, but why not Boston and DC? Interesting.

Map 2 shows the delinquency of subprime mortgages. New Orleans is expected as well as Detroit. Althought the Midwest did not see the same degree of appreciation and housing activity that the coastal US did, their weaker economic condition is apparent in this chart, as well as nothern Alabama, Georgia and the Carolinas.

Map 3 shows the percentage increase in delinquencies and we see the situation is rapidly deteriorating in California, Detroit and the Boston region.

I am also struck by the growth of subprime in an already low mortgate rate environment. Rates drop, subprimes increase, meaning it wasn’t just about affordability. 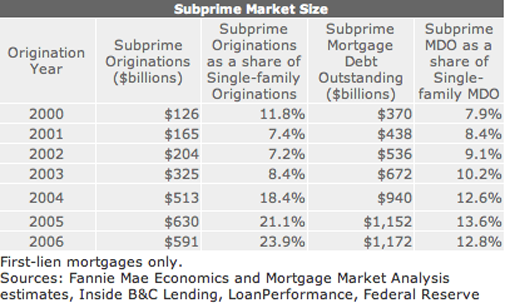 Subprime boomed as a percentage of single family originations during the period the Fed was agressively cutting interest rates or keeping them low (2001 to 2004). Why? Since mortgage rates dropped, affordability improved significantly. Then why such rapid gains in popularity?