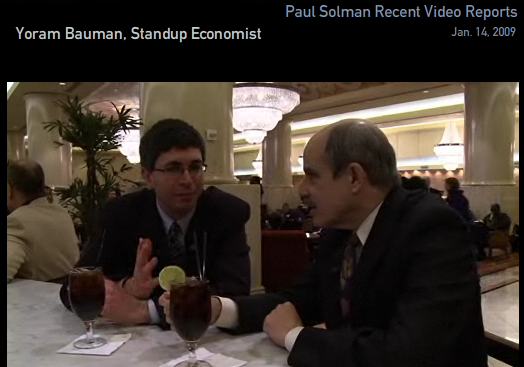 Yesterday I experienced six degrees of Yoram Bauman [1]. More on that later.

Ok, so I drove into the city instead of taking the train and got to listen to N. Gregory Mankiw on NPR [2] talking about his New York Times editorial piece on government spending [3].

He’s one of the big economists of the day who was the former chairman of the Council of Economic Advisers under president Bush, a professor of economics at Harvard University and most importantly, he wrote my son’s college textbook on macroeconomics. But he reminded me of Yoram Bauman.

Mankiw seemed to be saying that large government can’t management the spending that will be required for these stimulus plans and will result in a lot of waste, basically because we are rushing to do this without really analyzing it. Of course, we don’t have the luxury of time to do the due diligence either. So I really didn’t get much out of his interview or the NYT opinion piece.

But Mankiw also has a great blog [4], which is where I found the funniest YouTube clip on economics (yes, its possible) by “Standup Economist [1]” Yoram K. Bauman a few years ago.

You must watch the clip: Ten Principles Of Economics: Translated [5] if you haven’t already. Please. I’m begging you.

When surfing later in the day, I ran across Yoram today on PBS Newshour [6] blog. Its a brief interview but I would love to see him live if he comes back to New York.