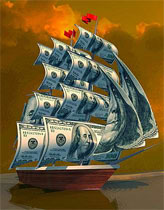 WASHINGTON (MarketWatch) – For the second straight year, the income of the typical U.S. family was unchanged in 2004 after adjusting for inflation, the Census Bureau said Tuesday. [Note: Reg.] [1].

This was made more clear in New York, where the ratio of low to high median income by county was the largest gap on record. The disparity between the low (The Bronx) and high (Manhattan) median income was 52 times. [2] The Bronx now has the lowest median income of any urban county in the country. 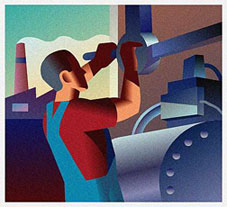 However, the middle class is shrinking in New York City. [3] Since the late 90’s, the upper tier of the real estate market has done well because much of the gains in personal income went to the top twenty percent…yet at the same time, the overall median income was flat.

We see statistics that show that the price of housing in many real estate markets is disproportionate to income. [4] If you look in New York, for example, personal income growth has been seen at the top tier and, surprise, surprise that is where the new development has been targeted. Very limited new Manhattan development of middle class housing has occurred. The gains in new housing stock, when thrown into the mix, would tend to skew the overall median (yes, median) and average sales price numbers upward.

This all makes for the argument that it is not very reliable to lump all housing markets into one big bucket or compare overall housing stats to overall personal income stats since the specific market sectors are what tell the story. Otherwise, it paints a picture of rough seas and we better start bailing.