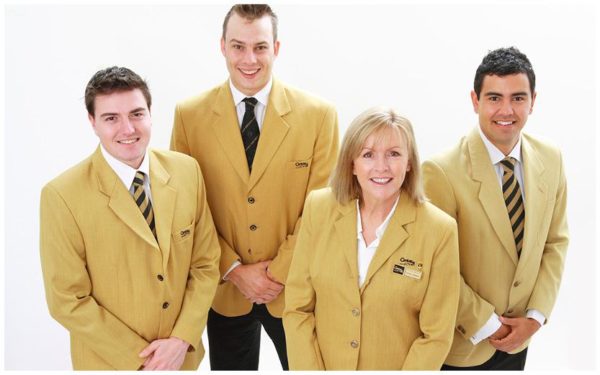 When I saw Brad Inman’s post Bring back the gold coats [1] on Monday I got a real chuckle out of my memories of agents, not just Century 21 agents, but others as well, wearing different jackets as part of their brand. This practice was ended in 1996 but the concept [is being done overseas Entrepreneur.com [2].

I think its a bit of a stretch to relate this to web snark but it was an interesting take by Brad. I think the point was to back away from dull corporate style branding and mix it up a little. However, in the days of “jacket marketing” everyone generally did the same sort of branding back then. I didn’t think of the jackets as innovative or effective at the time. Was polyester ever innovative?

Even back then, all the agents I knew hated wearing them and I am sure it rubbed off a little bit on their customers. I know firsthand since I wore one for about 6 months in the early 1980s in the midwest. Yuck with a capital Y. Apparently there is no demand for them these days [eBay]. [3]

I was not going to post on this topic but I got a big laugh from a good friend of mine in the midwest whom I had forwarded Brad’s post to. He has been a top producing real estate broker for many, many years. He told me that at one point, as he was considering leaving for a new agency (that didn’t require jackets), he was issued a new gold jacket. When he decided to make the move, the first thing his soon to be former broker asked him to do was to return the new jacket despite many years as their top producer. So he went home, changed the oil in his car (with jacket on), rolled around on the driveway a bit and returned the jacket. Apparently they didn’t think it was as funny as my friend did.