Damon Darlin’s The Last Stand of the 6-Percenters? [NYT] [1] was a really great overview of new brokerage services that are being offered. The article was very informative. However, after reading it, the article made me wonder who on earth would ever use a traditional broker again? Its not what I think the intention of the piece was.

New technology and new business models were pitted against longstanding tradition and a proven track record. There was a great phrase in the article referring to the difficulty of innovation in the real estate brokerage industry:

Well, rather than the idea that full service brokers are obsolete, I think the takeaway should be that there is room for both the old and the new. Like Dottie Herman, CEO of Prudential Douglas Elliman [2] (the firm for whom I author their market reports [3] for) said at Inman San Francisco: Technology won’t replace agents, agents with technology will replace agents [RCG] [4]. Exactly.

The irony in all this is the fact that the housing boom coincided with new venture capital monies which provided the opportunity for so many real estate start-ups to in fact, start-up. In fact, I see this as more of a dotcom real estate boom, with so many legitimate business models, rather than most of the silliness we saw in the previous dotcom boom, where thoughts of actually turning a profit would be figured out later.

Some of these new real estate technology sites will fail as the housing markets cool or their idea doesn’t catch on, while others will survive and thrive. Change can be good but its kind of hard when the system in place has been around for a long time.

I find that one of the weaker arguments to the new real estate models has been the idea of cost savings. Despite the near monopoly of listings through traditional MLS systems, there is the assumption that its an even playing field. In other words, users of these discount brokers assume that the property gets exposed equally whether its a Foxtons listing (remember Your Homes Direct?) [5], a Redfin listing [6] or a full service listing, when in fact, I would speculate that it does not. 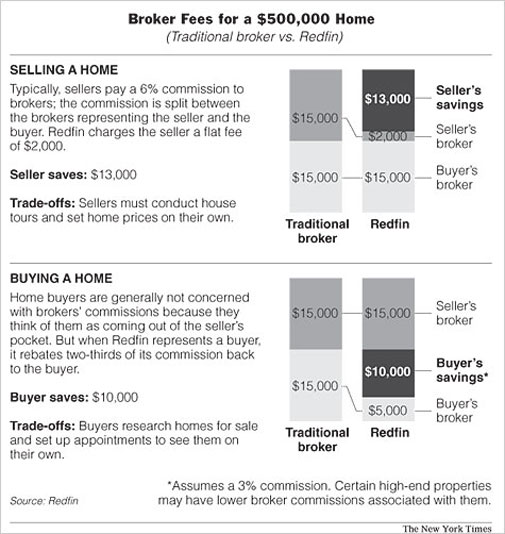 More eyeballs on a property, especially broker eyeballs, yield a higher chance for a higher price or simply a sale. In other words, a seller may be saving costs, but they could be working off a lower base (sales price) number because of the lower exposure. The cost savings seems to be more of a potential future benefit than at present and its not really comparing apples with apples (in theory it is, but not in practice). The MLS system is proprietary.

And what is it with NAR and public relations [7]? How can the NAR stir such ill will on a consistent basis? I continue to be amazed by their complacency and their disconnect with the public as an organization. Its tough to accept their word as gospel anymore. Even their current radio and TV ads about code of ethics seems to be too little too late. Its simply not fair to most realtors who are nice normal people and not the stereotype the profession has gained a rep for in recent years.

As a result, if you want to create a new real estate brokerage business model, now seems to be as good a time as ever.