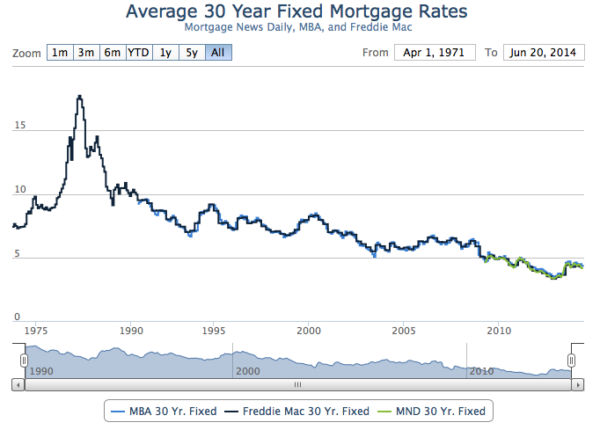 Admittedly he has always seen the real estate world through different lenses than I so I am often thrown for a loop when I come across some of the rationale for the current state of the housing market.

A local media outlet recapped his NAREE speech [4] but since I didn’t attend and there is no transcript, I’ll go with the following paraphrasing:

Mortgage rates reached record lows in 2012 and 2013 of around 3.3 percent for 30-year home loans. Homeowners don’t want to let go of those once-in-a-lifetime bargain mortgages, says Lawrence Yun, chief economist for the National Association of Realtors. So homeowners avoid putting their homes on the market in order to keep those low mortgage rates and that has resulted in super low inventories of home for sale. Although rates are still low (less than 5 percent) many people are opting to rent out their houses so they can hang onto great mortgages, Yun says.

Here’s another way to look at what he says is happening:

Yun – Home sales are not rising (year-over-year) because mortgage rates are so low that would-be sellers won’t sell. They simply love their low mortgage rate more than moving.

My view – Home sales are not rising (year-over-year) because of a combination of rapidly rising home prices that reduces affordability and historically tight mortgage lending standards that resulted record low inventory. Tight credit keeps the roughly 40% of home owners with low or negative equity from selling because they don’t qualify for the next mortgage. Hence, sales fall.

There is clearly way too much emphasis on mortgage rates in our housing economy.