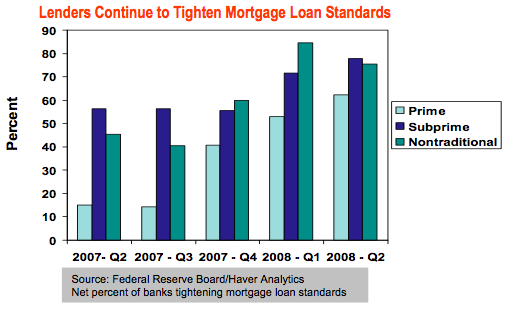 In the recent edition of PMI’s Housing and Mortgage Market Review [1] (which is now a better read since chief economist David Berson came over from FNMA), focus was on affordability this month. Mortgage lending has gotten back to basics since last summer. Thats a positive long term view and will hopefully promote better overall financial stability of the banking system. It will be interesting to see how long this new found religion lasts after lenders post substandard profit performance over the next several years.

Underwriting standards remain tight, but there is a general feeling that affordability is better now that mortgage rates are relatively stable and prices have fallen in many markets. 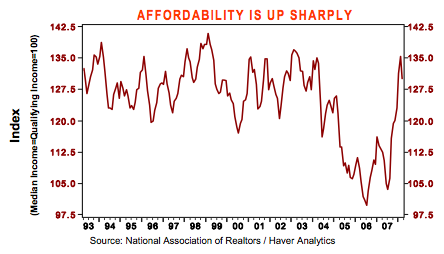 NAR publishes a housing affordability index [2] which the PMI analyzes. Affordability has jumped substantially over the past 6 months. The index bases its index on three factors:

Prices are the real wild card here since the other two factors aren’t improving affordability. The PMI report spends a lot of time analyzing the OFHEO and S&P indexes which use the repeat sales methodology.

However, the problem with the NAR Affordability Index is not which price index is selected. The problem is that it does not consider availability of credit. Underwriting standards are the highest they have been in years. Its not an apples to apples index because the formula doesn’t consider this major variable (it wasn’t necessary to consider this 10 years ago because underwriting standards were relatively stable) to affordability. Availability of credit is now the key driver of affordability.

To say affordability is “way up”, while technically true, has no real world application. The word “affordability” in this application is simply the name of a metric, not a correct word to describe whether borrowers are more able to purchase a home.

If affordability is “way up”, why are home sales declining and foreclosures rising?

Logic says that if affordability is up significantly, we would have seen a surge of home purchases since the beginning of the year. That hasn’t happened. Why? Because many who would have qualified for a mortgage in 2005, doesn’t qualify today even if there was no change in their financial condition.