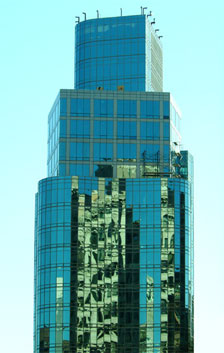 There is an excellent article on How Condops Differ From Condops [NYT] [1] that discusses the two uses of the word and why they are different. I don’t know if this form of ownership exists in other parts of the country outside of New York, but if it does, I suspect its rare.

The Legal Entity
In the 1980’s, the housing boom created a hybrid form of ownership called the “cond-op.” This form allowed the developer (sponsor) to retain control of the commercial or retail space, usually at grade and/or keep the building from violating its 80/20 if the commercial units were throwing off too much income. [80/20 law allows co-ops their tax deductions like real estate has] It works like this. The co-op entity would be enveloped within one of the condo units (legally). If there were two ground floor commercial units, each unit would be designated as a condo unit. This way a 200 unit apartment building with 2 retail units could be converted to a 3 unit condo development. The co-op board would have no power over the retail units. To the buyer of a residential apartment, the co-op acts and functions as a co-op, because, well, it is one. The main difference being that it doesn’t have control over the retail units. We generally find no disparity or penalty in this configuration.

Flash forward to the current market.

The Marketed Entity
The term condo-op has morphed into something else. The limited availability of sites have stimulated developments built or converted on land that is leased. This form of ownership can not be condo because the land is not owned in fee simple. These new developments are legally developed as co-ops but have rules that are more flexible than typical co-ops and are often called cond-ops. Easier board approval, more flexibility in renting are among the inferences the term implies. In fact, new developments like Astor Place (445 Lafayette), actually use the term condo-op on the cover of their offering plan, when they are, in fact co-op apartments.

UPDATE: Changed Lexington to Lafayette above – sorry about that. 😉