[This monthly market report is provided by Jeffrey Otteau of the Otteau Appraisal Group [1] who also authors a series of widely followed quarterly market reports [2] on the New Jersey real estate market. This information is collected from various sources including Boards of Realtors and Multiple Listing Systems in New Jersey.]

I have known Jeff for many years and consider him one of the leaders in the real estate appraisal profession. He has taught me a lot about quantitative real estate market analysis. -Jonathan Miller 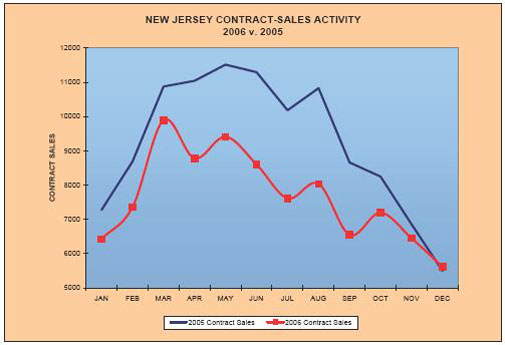 In the most positive sign for the New Jersey housing market in more than a year, contract-sales activity in December moved into positive territory for the 1st time since August 2005. In December, contract-sales activity ran 2% higher than December 2005 providing solid evidence that home buyers are beginning to reenter the housing market in response to lower home prices and continued low mortgage interest rates. The December performance follows lesser improvements in year-on-year home sales in October and November, and marks the first time in 16 months that the housing market experienced a higher volume of monthly sales activity than the prior year.

A more sobering view however comes from Unsold Inventory which actually increased in December by 1% or about 800 homes. While this increase is not significant from a statistical perspective, it does send a clear message that greater increases in home sale activity will be needed to reduce current inventory levels and restore balance to the housing market. At the December sales pace, Unsold Inventory represents a 10.6 month supply which far exceeds the balance point at which home prices will rise. By comparison, there was a 7.8 month supply one year ago. Therefore, while recent market improvements may signal the end of the housing decline, it should not yet be interpreted as a return to higher prices. Also keep in mind that these improvements have been fueled primarily by lower home prices suggesting that Right-Pricing! remains the key to successful home marketing.