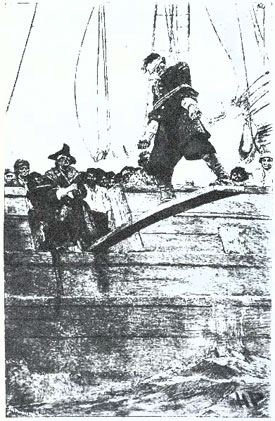 Pirates of several hundred years ago have been getting a lot of attention of late via the 3 Johnny Depp/Disney movies [1].

Well, apparently pirates formed some of the first petri dishes of modern economics and democracy according to a new book “The Invisible Hook: The Hidden Economics of Pirates [2]” written by an economics professor at George Mason (hat tip to Freakonomics [3]).

The book caught me eye [2], arrgh, as someone who fancies the likes of (sorry, I digress) Talk Like A Pirate Day [4] each September 19th as well as my friend Chris Miles’ site TalkLikeAPirateDay.com [5]. The “founders of International Talk Like a Pirate Day acknowledge that there is, in people who love to say “Aargh,” a yearning for a certain kind of freedom.”

Presidential candidates, take note: Long before they made their way into the workings of modern government, the democratic tenets we hold so dear were used to great effect on pirate ships. Checks and balances. Social insurance. Freedom of expression.

The pirates who roamed the seas in the late 17th and early 18th centuries developed a floating civilization that, in terms of political philosophy, was well ahead of its time. The notion of checks and balances, in which each branch of government limits the other’s power, emerged in England in the Glorious Revolution of 1688. But by the 1670s, and likely before, pirates were developing democratic charters, establishing balance of power on their ships, and developing a nascent form of worker’s compensation: A lost limb entitled one to payment from the booty, more or less depending on whether it was a right arm, a left arm, or a leg.

Aside from walking the plank analogies, what the heck does this have to do with housing?

I’m getting to that.

If you think about it, one of the arguments against anything in the form of a bailout, is that we let the free markets decide (aka “Aargh”). Good honest hard working people should not be asked to foot the bill for other’s greed. I agree.

But all the “help” done so far is explicitly presented as anything but a “bailout” which is not true. That’s because any “fix” is essentially a bailout.

In a pure sense, the “anti-bailout” sentiment is based on the idea that people took advantage of the lending system to their own personal gain at other’s expense so they should suffer their free market fate.

If people broke laws, they should be punished. But what if they didn’t and gamed the system to its full advantage because there were no regulations or significant repercussions?

My entry into blogging in 2005 was born out of frustration that people around me were gaming the system “legally” (definitely not ethically) and seemingly nothing could be done about it or no one in government was willing to or understood what the problem was. Until now.

Which brings me to my point.

Free markets don’t work if there aren’t guidelines (remember that quote from Pirates of the Caribbean?). The problem with the lending environment of the past 5 years was the lack of appropriate regulation, oversight and enforcement. There was not a level playing field and risk could be shifted off to unwitting (misinformed, naive or stupid) investors.

In other words, it was a systemic problem.

Yet a business enterprise made up of the violent and lawless was clearly problematic: piracy required common action and mutual trust. And pirates couldn’t rely on a government to set the rules. Some think that “without government, where would we be?” Leeson says. “But what pirates really show is, no, it’s just common sense. You have an incentive to try to create rules to make society get along. And that’s just as important to pirates as it is to anybody else.”

Unless all parties have skin in the game, whether it is lenders, investors, borrowers, appraisers, mortgage brokers, mortgage bankers, investment banks, government, regulators, GSEs, ratings agencies, there is no financial democracy and we will have another systemic breakdown.

In other words, we need a workable regulatory structure.

The pirates were a lot more innovative than we probably give them credit for – you do need to lose an arm or a leg if you do something wrong.