According to the Mortgage Bankers Association, there has been a surge in refi applications this week has resulted in a refi-boom. Mortgages rates are falling [1].

Its been a week since the Fed’s rate cut and we are already seeing reports that the market is stirring in some locations…although this strikes me as basically anecdotal-based reporting, no? 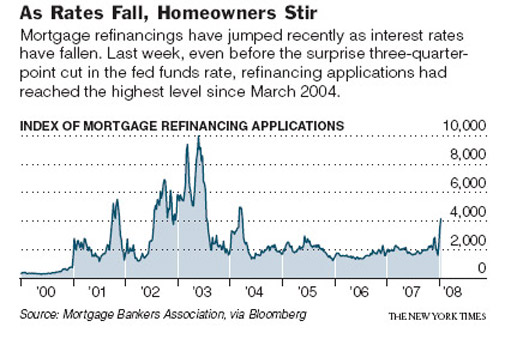 This week, the average 30-year fixed rate was 5.48 percent; the rate was approaching 7 percent as recently as last summer.

…At what point will buyers be compelled to act, thinking they are getting a price they can live with and a rate they do not want to miss?

One indisputable effect of the Fed action is a rise in refinancing applications, continuing a trend that started late last year.

It’s hard to understand the world clearly without watching The Daily Show. Here’s the recent appearance by CNN real estate show host Gerri Willis with Jon Stewart [2] on Comedy Central. The whole clip is entertaining, but if you don’t have time, fast forward to the 5 minute mark to catch the talking head chatter (Barbara Corcoran?). Wow.