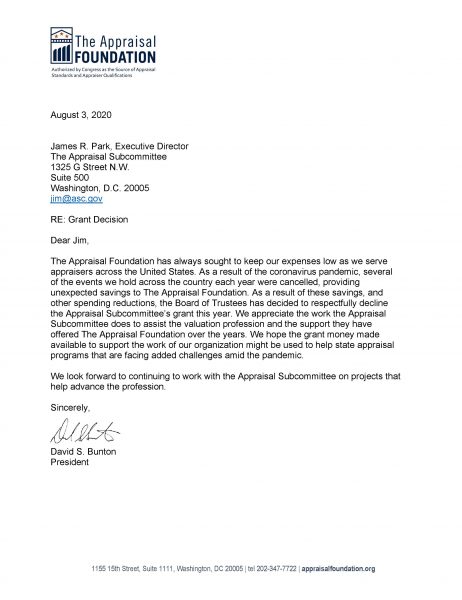 This post previously appeared in the August 14, 2020 [1] edition of Housing Notes. I’ve been writing these weekly summaries on housing topics for more than five years. To subscribe for free, you can sign up here [2]. Then you can look forward to each issue every Friday at 2pm New York Time.

The TAF decline in credibility keeps on coming…

After the recent letter debacle where the Appraisal Foundation (TAF) opined falsely [3] that Title XI did not permit the Appraisal Subcommittee (ASC) to provide oversight on TAF, we now have a letter from TAF essentially saying they are making so much money that they don’t need a grant this year from ASC. Who is writing all these letters? It can’t be Dave. 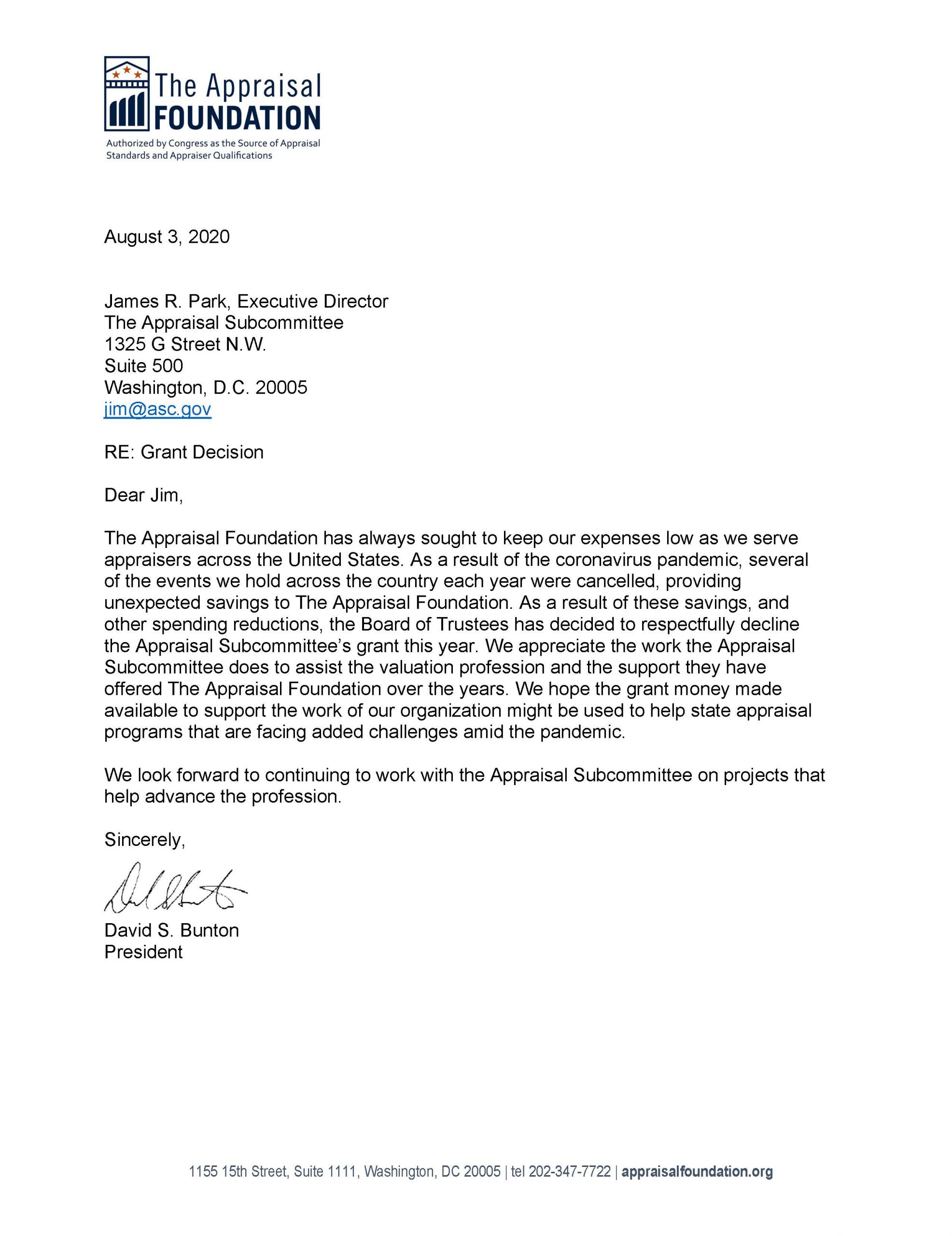 In other words, because TAF saved so much money from not being able to fly around the country during the pandemic, they don’t need ASC Grant money this year. From this point, it’s only a hop skip and a jump to saying they don’t need the grant money so therefore they don’t need oversight. And grant money comes with “strings attached” – that the money used from a grant had to be accounted for to the ASC. And if TAF doesn’t need oversight this year, what is to stop them from raising USPAP related fees and stop collecting grant money forever? The conspiracy theorist in me is starting to worry about that aspect of this new more forceful tone out of TAF these days against any oversight.

Why would the TAF turn down the annual grant process but still have the need to request PPP? What is the hardship they are declaring when they are saving hundreds of thousands in travel costs that are already questionable in their scale?

My appraisal firm in Manhattan applied for PPP because our business collapsed more than 90% almost immediately for two months. It enabled us to survive. I would think it would be obvious to TAF that their $626,000 annual travel expense would collapse. What other revenues would be sharply curtailed in the new online world?

WITH MILLIONS IN CASH AND STOCKS, APPRAISAL FOUNDATION HAULS IN CARES ACT RELIEF

(LOS ANGELES, July 6, 2020) – Over the years, the tiny, publicly funded Appraisal Foundation has built up a large reserve in cash and publicly traded equities. Its war chest grew from $3.6 million in 2010 to $6.5 million in 2018, the most recent year its IRS Form 990 [5] is available. Its Cause IQ peer nonprofits had nothing like it in their reserves. Despite this burgeoning pot, it has continued to receive public grant money each year from state-licensed appraisers via the mandatory National Registry Fee. In early July 2020, it was learned that, despite wielding this hefty reserve and its guarantee of annual public grant money, the nonprofit also applied for and received CARES Act relief [6] through the Small Business Administration of between $150,000 and $350,000. This is money that could otherwise have gone to struggling mom-and-pop appraisers hurt by the pandemic.

From 2010 to 2018, the nation’s licensed appraisers paid the 14-employee organization more than $6 million through the mandatory National Registry Fee. The group then parlayed that subsidy into more than $27.6 million in publishing revenue extracted from the same captive appraisers during that time. It has copyrighted the publicly subsidized materials and granted exclusive online course rights.

In 2017, the foundation paid its top officer more than $760,000 in an internal retirement-plus-salary deal that effectively doubled his pay from the previous year. For 2018, trustees paid him $414,000 – less than the previous year’s haul but still more than twice the salary of the chairman of the Federal Reserve, who oversees 20,000 employees and the nation’s central bank.

These issues would be no one’s business were this organization not receiving guaranteed annual public grants, tax-exempt status and allowed to wield a government-authorized publishing franchise and contracts with the U.S. Department of the Interior and Department of Justice – and it is now receiving PPP money. A congressionally authorized federal contractor with guaranteed public grants is not what lawmakers had in mind when they passed the CARES Act, which includes the PPP program.

During this pandemic, expect to see licensed appraisers further weakened with fewer options and higher license upkeep costs. Expect the nonprofit to further leverage its copyrights – the development of which appraisers pay for. It is now receiving CARES Act relief. It has never let a good crisis go to waste.

If you’re frustrated, here’s something you can do right away:

Email Mark Abbott, Grants Director at the Appraisal Subcommittee, at Mark@asc.gov [7] and James Park, its Executive Director, at Jim@asc.gov [8] and tell them you want the Appraisal Foundation’s next grant to be reduced by whatever public funding the foundation has received from the CARES Act during the pandemic and its reserves of cash and publicly traded securities, which totaled $6.5 million as of its most recent IRS Form 990. The $40 National Registry Fee paid by appraisers each year ($80 at biennial license renewal) needs to be rolled back by a commensurate amount to provide relief to appraisers. The waste and abuse going on at this tiny nonprofit is being underwritten by the public and it needs to stop. Please cc Arthur Lindo at the Federal Reserve at arthur.lindo@frb.gov [9].

About “Dispatches from the Cosmic Cobra Breeding Farm [10]”: The culmination of two years of research, a new book illuminates over-the-top spending and questionable dealings at the familiar Beltway nonprofit. Published just before the pandemic, it chronicles international jet-setting by officers and trustees, conflicts of interest, lobbyist tie-ins, outsized cash reserves and swollen pay at the tiny nonprofit. The book is available at Amazon in paperback and Kindle versions. You can read more about it on the book’s Amazon page.

Here is another email from appraiser Jeremy Bagott (The Cosmic Cobra guy). Bold my emphasis.

Thanks to the Small Business Administration’s data release on July 6, a few news outlets are working doggedly to expose organizations that, with dubious need, have applied for and received federal PPP relief. Ryan Tracy of the Wall Street Journal recently wrote about double-dipping by state highway contractors in Florida who applied for and received PPP relief despite holding government contracts unaffected by Covid. You can read the story here [11] (but you’ll have to get past the Journal’s paywall).

A rogues’ gallery of organizations that have applied for PPP relief include Harvard University (with its $39 billion endowment), the Los Angeles Lakers of the National Basketball Association (with its reported $3.7 billion valuation) and, yes, the congressionally authorized Appraisal Foundation. The former two were shamed into giving the money back once the matter was made public.

Unlike Harvard and the L.A. Lakers, survival of the Appraisal Foundation and its paid panels is literally guaranteed in a federal statute [12]. The statute mandates its guaranteed annual government grants. The making of the grants is part of the Appraisal Subcommittee’s charter. According to its IRS Form 990 [5] for 2018, the most recent available, the Appraisal Foundation spent $626,000 on travel that year. (If past years are any measure, some of it was on international junkets for top officers and favored trustees.) It no longer has that travel expenditure due to the pandemic. The foundation also had $6.5 million in cash and publicly traded equities, according to its 2018 tax form. Why did it apply for between $150,000 and $350,000 in PPP relief?

If you now google “Appraisal Foundation” and “PPP,” the top hit is a CNN Politics site that identifies the Appraisal Foundation as a nonprofit that has applied for and received PPP funding. You can see it here [13]. The Wall Street Journal and CNN are doing God’s work in this respect.

If you’re frustrated, here’s something you can do right away:

Email Mark Abbott, Grants Director at the Appraisal Subcommittee, at Mark@asc.gov [7] and James Park, its Executive Director, at Jim@asc.gov [8] and tell them you want the Appraisal Foundation’s next grant to be reduced by whatever public funding the foundation has received from the CARES Act during the pandemic and its reserves of cash and publicly traded securities. The $40 National Registry Fee paid by appraisers each year ($80 at biennial license renewal) needs to be rolled back by a commensurate amount to provide relief to appraisers during the pandemic. The waste and abuse going on at this nonprofit is being underwritten by appraisers (who are also voters and taxpayers). It needs to stop. Please cc Arthur Lindo at the Federal Reserve at arthur.lindo@frb.gov [9].