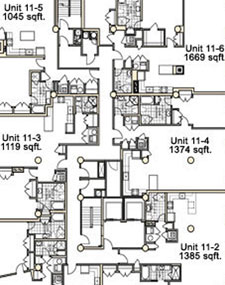 DEAR BOB: In August 2004, I purchased a junior one-bedroom condo, advertised as “approximately 551 square feet.” A week ago, I receive a list of recent sales in my building from the realty agent who sold my unit. It listed the condo like mine three floors above me, which sold at 523 square feet. That is 28 square feet smaller than I was lead to believe. If my math is correct, based on my purchase price I overpaid by $11,180 in square-foot value. Is “approximately” a common wording realty agents use to inflate the square footage and price? Should buyers be responsible for verifying this? The appraisal didn’t evaluate size. What advice do you have on recouping the misrepresented square footage and associated value? –Daniel R.

DEAR DANIEL: Have you measured the square footage of your unit? Maybe the upstairs unit is different. Unless you can prove you paid on the basis of the advertised square footage, such as $200 per square foot, you would have a very weak case to prove misrepresentation.

Most real estate listing information includes “weasel word” disclaimers such as “Information deemed reliable but not guaranteed.” You said your condo was advertised as “approximately” 551 square feet, indicating there was no specific representation.

Here are some thoughts:

I don’t see how this buyer can do anything if all those disclaimers were used. I would bet that any two architects, any two brokers, any two appraisers who measured this unit would not come up with the exact same result.