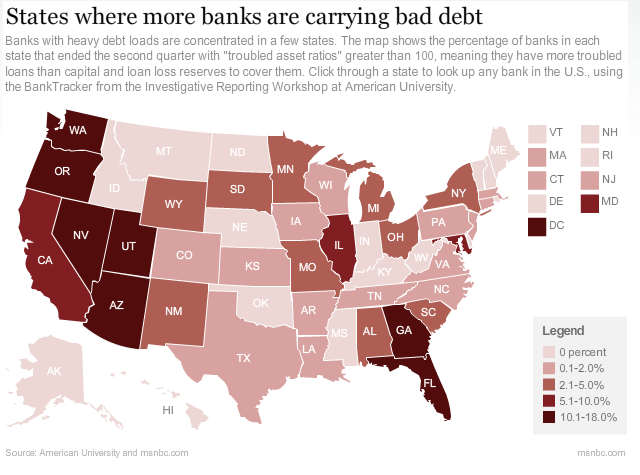 American University and MSNBC have combined to create BankTracker to show the general status of banks by focusing on bank capitalization [1].

The American Bankers Association is against publishing such a list (I assume the fear of causing a run on under capitalized (higher ratio) banks even though FDIC insures the depositors in these banks.

The American Bankers Association opposes the sharing of ratios like these with the public, and cautions that a heavy debt load does not ensure that a bank will fail. The FDIC has said its “problem list” of troubled banks rose to 416 at the end of June, but that list is secret, and there’s no way to know how much it overlaps with our list of banks with high levels of troubled loans.

The data may lag the actual current standing of the market (hmmm, sounds like the real estate market)

Of the 100 largest banks, Wachovia had the highest ratio. Colonial was second highest of the large banks and it failed last month.

While the depositors are protected, the banks are feeling rising pressure from bad loans [4] and this is an important component of economic recovery.