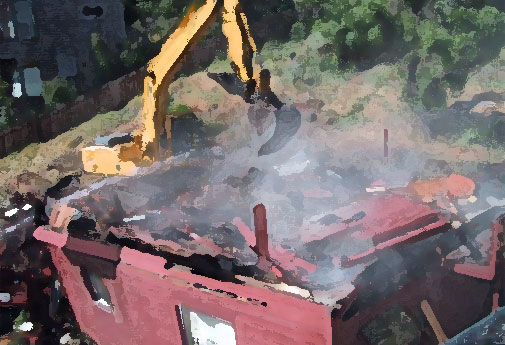 In the widely email distributed article this week from The Atlantic (and what’s up with the Atlantic these days? an even better read.): The Next Slum? [1] Christopher Leinberger suggests that the problems of the inner city may work their way into the suburbs.

Thats a logical argument given the trend toward new urbanism [2] …city’s rule, suburbs drool, as they say.

Crime and vacant properties seem to be on the rise in suburbia but I think that phenomenon is attributable to the rise in foreclosure rates due to subprime and credit problems [3]. Many houses were built for people who egenrally couldn’t afford them or they were very vulnerable to an up tick in mortgage rates. Take Stockton, CA for example [4].

Arthur C. Nelson, director of the Metropolitan Institute at Virginia Tech, has looked carefully at trends in American demographics, construction, house prices, and consumer preferences. In 2006, using recent consumer research, housing supply data, and population growth rates, he modeled future demand for various types of housing. The results were bracing: Nelson forecasts a likely surplus of 22 million large-lot homes (houses built on a sixth of an acre or more) by 2025—that’s roughly 40 percent of the large-lot homes in existence today.

However, I would think builders would adapt to the change in demand. I am not entirely sold on the logic presented since the lack of demand for McMansions would drop their value and bring more demand. Nelson appears to be suggesting a nation full of empty homes.

In the past decade, as cities have gentrified, the suburbs have continued to grow at a breakneck pace. Atlanta’s sprawl has extended nearly to Chattanooga; Fort Worth and Dallas have merged; and Los Angeles has swung a leg over the 10,000-foot San Gabriel Mountains into the Mojave Desert. Some experts expect conventional suburbs to continue to sprawl ever outward. Yet today, American metropolitan residential patterns and cultural preferences are mirror opposites of those in the 1940s. Most Americans now live in single-family suburban houses that are segregated from work, shopping, and entertainment; but it is urban life, almost exclusively, that is culturally associated with excitement, freedom, and diverse daily life. And as in the 1940s, the real-estate market has begun to react.

However, the idea that urban centers could see more home price appreciation than the exurbs or even the suburbs over the next few decades is plausible. It’s already occurring.