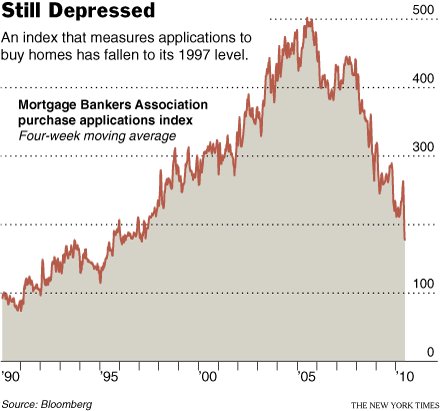 Until real estate market participants stop drawing comparisons to the 2003-2007 housing boom as the standard for “normalcy” rather than seeing it for the anomaly it was, it’s going to seem very depressing.

Here’s a good article in the the New York Times – Housing Market Slows as Buyers Get Picky [2] that accurately portrays the state of housing right now as we enter the “post-housing stimulus” market.

While we have good news about low mortgage rates, application rates have fallen to mid-1990s levels. And I have long maintained the Mortgage Banker Application index is overstated since it doesn’t consider rejected applications, a significant phenomenon during periods of weak market conditions, especially now.

Even the lowest home mortgage rates in decades are not doing much to invite deals. The Mortgage Bankers Association said Wednesday that applications for loans to buy houses were down by a third compared with last year. Applications are back to the level of the mid-1990s, when the country’s housing market was smaller.

In other words, sellers need to take a look around them and realize what the market is actually like and price accordingly. This outburst in activity may very well have damaged the latter half of 2010 in the form of disconnected sellers. Combine that with the tax credit expiration and it’s, well, it’s time to be reasonable.