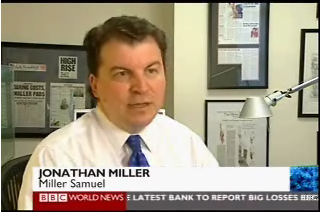 Today I was interviewed by BBC TV on the housing market, specifically relating to the new home stats released today by the US Commerce Department [1]:

Sales of new one-family houses in March 2008 were at a seasonally adjusted annual rate of 526,000, according to estimates released jointly today by the U.S. Census Bureau and the Department of Housing and Urban Development.

Of course the Â±16.1% is a wacky margin of error but the trend is clearly down.

Inventory is declining but that looks to be meaningless because the Commerce Department does not go back and restate their figures based on canceled contracts which have been at high levels.

Perhaps the only ray of hope [2] was data showing that inventories of unsold homes fell for the 12th consecutive month in March, an indication that builders are making some progress to get their inventories under control. However, with sales plunging even faster, the supply of homes on the market rose to 11 months, the most in 27 years. Inventories are likely understated as well because of canceled sales contracts.