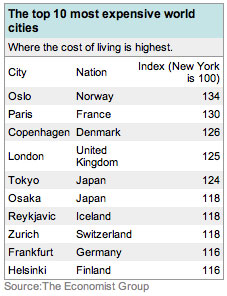 Covering the New York real estate market has definitely ingrained a New York-centric perspective on a few things, namely how darn expensive it is to live here. In fact, New Yorkers are proud of how expensive it is here. Sort of like North Dakotans being proud of their harsh winters. Self-rationalization for being here prevails otherwise everyone would live in San Diego (ok, so I am being simplistic).

Its not a housing survey but since toothpaste generally makes people feel good, or at least not afraid to smile, they are more inclined to purchase real estate. Ok, not really but I need a reason to post these stats…

The survey compares the cost of a basket of 160 goods and services in 132 countries. Everything from tobacco to toothpaste to theater is considered.

A survey by the Worldwide Cost of Living survey released Monday by the Economist Group [1] ranks Oslo, Norway (a North Dakota parallel here) as the most expensive. In fact, with New York as the base indicator of the study which I found strange (ok, at least New York gets some recognition), Oslo is 32% more expensive to live in.

Growing up, I seem to remember that Tokyo was always number 1, but now, even with their federal funds rate equivalent set at just above 0, Tokyo was ranked 5th. Europe dominated the top of the list. The weak dollar here probably helped.

Tehran, Iran was at the bottom of the list, costing about 1/3 as much to live there as in New York City. Perhaps we’ll soon be saying, (borrowed from the movie Casablanca): [2]