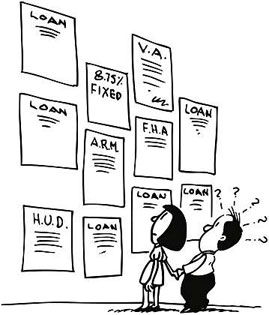 One of the byproducts of rising housing prices is the fact that government agencies and GSE’s (government sponsored enterprises) have had to keep pace too. The conforming loan limits are based on federal data on mean (average) home prices from the Office of Federal Housing Enterprise Oversight (OFHEO). Starting with Fannie Mae in November and Freddie Mac in January, all have changed their loan limits to be in compliance. Mortgage rates and options are usually less expensive with a conforming loan (under the loan limit).

Here’s my question:
If the loan limit is raised to keep pace with the market, why would Fannie Mae state in their press release [2] that this could add as many as an additional 466,326 homeowners who would be eligible for a conforming loan?

Doesn’t that imply a higher tolerance of risk for the federal government? Since the OFHEO increases are based on market data (well not really) [Matrix] [3], then the limit should rise and fall with the market. If more people qualify because of the increase, then wouldn’t the increase have to outpace the market? Hmmm, I’ll have to chart this one – more to follow.

Here’s the summary of each of the main 4 agencies or GSE’s that the OFHEO affected:

“Freddie Mac announced it will implement an increase in its single-family mortgage loan limit from $359,650 to $417,000 effective January 1, 2006. This increase in conforming loan limits is based on the October-to-October changes in the average house prices, as published by the Federal Housing Finance Board (FHFB), and on Supervisory Guidance issued by the Office of Federal Housing Enterprise Oversight. The FHFB figures come from its monthly survey of lenders. Both new and existing homes are included in the survey.”

“The Veterans Benefits Act of 2004 was signed by the President on December 10, 2004. The law changes the maximum guaranty amount of $60,000, for certain loans in excess of $144,000, to an amount equal to 25 percent of t he Freddie Mac conforming loan limit determined under section 305(a)(2) of the Federal Home Loan Mortgage Corporation Act for a single family residence, as adjusted for the year involved.

“The new loan limits are part of an annual adjustment HUD makes to account for rising home prices. Under federal law, loan limits are tied to the conforming loan limits of Freddie Mac and Fannie Mae, federally chartered corporations that buy and package mortgages.”