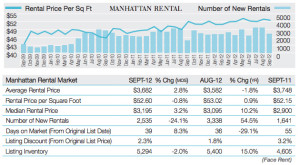 The third quarter rental market reports were released at midnight, and it’s a grim outlook, once again. The Prudential Douglas Elliman report shows that the median rent rose 10.2 percent to $3,195 from $2,900 during the same period in 2011. Rents rose at the same “brisk pace we’ve seen for much of 2012,” says report preparer Jonathan Miller, and the market is likely to remain tight for awhile as credit is still tight. “Mortgage underwriting has not eased since Lehman collapse,” explains Miller. “Now that mortgage rates are seemingly falling to record lows every few weeks, many are unable to transition from rental to purchase. This has tipped the rental market upward.” Miller adds that increased employment is also pushing rents up, as the rental market responds much more quickly to changes in employment. “It’s a smaller, more nimble transaction than a purchase.”

New rentals (first time renters or people who opted not to renew their lease and looked elsewhere) are up 54.5 percent from last year, which Miller taks as a “sign that tenants are resisting (unsuccessfully) rental increases proposed by landlords.

The Citi Habitats report found that vacancy rate for Q3 reach 1.22 percent from Q2’s 0.97 percent and from 2011 Q3’s rate of 0.93 percent. September’s vacancy rate of 1.33 percent was the highest Manhattan has seen since December 2010. “There has not been this much available inventory on the market in nearly two years,” writes Citi Habitat President Gary Malin. The Elliman report found inventory to be up 15 percent from last year, but apartments are getting picked up faster than last year. Average time on the market is down to 39 days, from 55 days year-over-year.

Conclusion: high rents, but less concessions and more places, but less time to see them. Good luck out there!