Almost two years ago the real estate new development world was rocked by the New York Times epic page one story [1] by Louise Story and Stephanie Saul about foreign investment in U.S. real estate. The vehicle for “Towers of Secrecy [2]” purchases was the ubiquitous LLC shell corporation. While I’m no advocate of illegal activity for the sake of preserving the health of a real estate market, I was very skeptical and outspoken about the challenge of measuring the impact of this new rule. Especially since the new development market had already started to show signs of over supply by mid 2014 in both Manhattan above $3M and Miami above $1M. It also seemed to single out wealthy buyers who did not want to get a mortgage. How could the effectiveness of this six month rule be measured reliably enough to be extended or made permanent when the market was already falling?

Since these series of articles came out, I have learned a lot more about the scale of kleptocracy [3] around the world and more appreciative of what the rule attempted to accomplish.

Fast forward to 2017 and the super lux (≥$5M) new development condo market cooled sharply. The rule has been extended but is now up for renewal in a month. It is not clear whether the new administration will renew it. Nicholas Nehamas of the Miami Herald penned are great recap [4] of the rule status. To make it even better, he included a YouTube video of bulldozers playing chicken [5] in the piece.

I have to say I admire the messaging that came out of Homeland Security to justify the rule’s impact. Whether or not the following is an exageration, the mere existance of the rule is probably an effective deterent.

“We don’t come across [money laundering in real estate] once every 10 or 12 cases,” said John Tobon, U.S. Homeland Security Investigations Deputy Special Agent in Charge for South Florida. “We come across real estate being purchased with illicit funds once every other case.”

Here are the areas current covered by the Treasury rule. 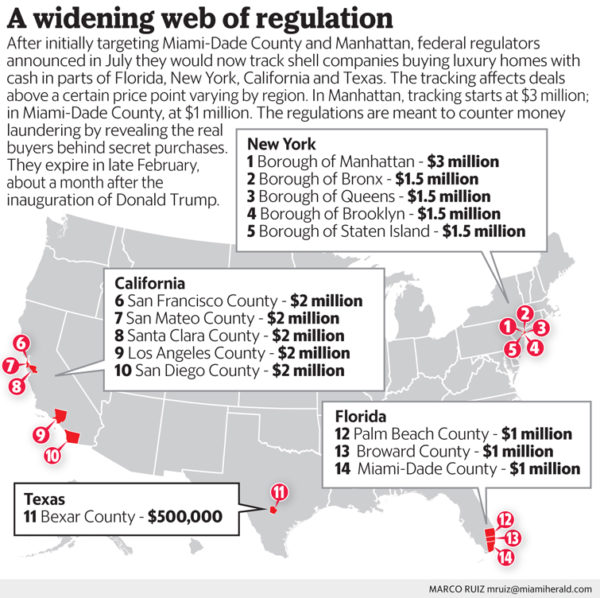 Using the parameters of the rule, the Miami Herald asked that I analyze sales in the five boroughs of NYC since enactment.  I stuck with condos and 1-3 families since co-ops tend not be a preferred property type of foreign buyers. I found that sales dropped 6% year over year for the aggregate of Manhattan sales over $3M and the outer borough sales of $1.5M. This included legacy contracts that closed during the rule enactment period but went to contract before it started. Those sales likely softened the actual decline in sales. 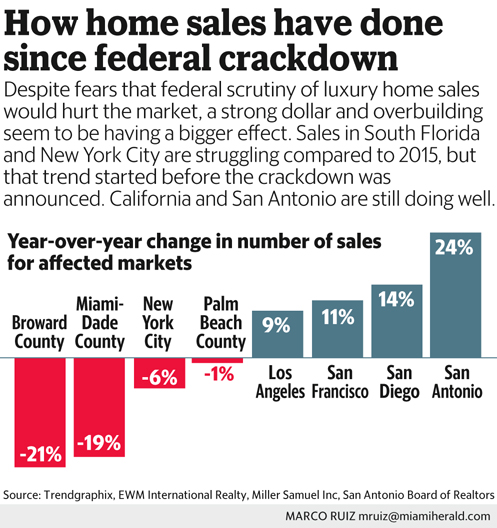 While it appears reasonable that the rule had some drag on demand, a possible repeal in February won’t likely have much of an impact on the oversupply that currently exists.