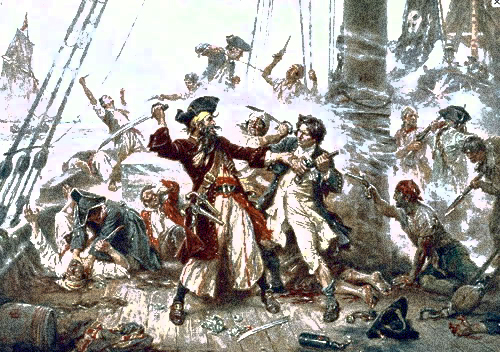 Let me see…running around on the deck violating laws…ruining lives…chasing treasure that isn’t always what it seems…I must referring to Talk Like A Pirate Day [1]. Not investment banks…Aaarrgh.

You can thank Dave Barry of the Miami Herald [5] for getting the tradition going.

Here’s the story behind the madness of Talk Like A Pirate Day [6].

the day is the only holiday to come into being as a result of a sports injury. He has stated that during a racquetball game between Summers and Baur, one of them reacted to the pain with an outburst of “Aaarrr!”, and the idea was born. That game took place on June 6, 1995, but out of respect for the observance of D-Day, they chose Summers’ ex-wife’s birthday, as it would be easy for him to remember.

Even Word-a-day [7] got into the spirit.

The original site is Talklikeapirate.com [8] but my friend runs the third ranked site called Talklikeapirateday.com [9] after the second ranked Yarr.org.uk [10] site in England.

Imagine legions of people googling “Talk Like A Pirate” for this holiday every year. The traffic is insanely high to these sites [11] once a year.

This phenomenon reminds me of the immortal words (paraphrased from memory) of Guy Kawasaki [12], one of the early software evangelists at Apple.

Millions interacting with people they don’t know; about topics they don’t understand; for reasons they can’t explain.

Makes perfect sense to me. Arrrrgh!

Ok, it’s gettin’ late – I’ll soon address the SEC issue on short selling and the rumors of a new and improved RTC with a Johnny Depp-like delivery.

UPDATE: Number one search phrase on Google today “Talk Like A Pirate Day [13]” and this Matrix post is the first blog mentioned. Arrrgh.