I have a lot of good friends and colleagues who frequently give at least a passing thought to quitting the Appraisal Institute [1], the largest real estate appraisal industry trade group. At the national level, the association has lost the ability to work for its members and has instead, shifted into a political failure spiral by enacting policies that are against their chapters’ and members’ best interests.

“I am only paying my dues to retain my designation.”

“The chapters are the only relevant thing AI provides to help me.”

“The self-dealing politics at National sickens me.”

Their announcement of the new administrative policy on November 30, 2016 continues the trend:

As you might have heard by now, the Appraisal Institute Board of Directors recently took a significant step to enhance your chapter’s ability to focus its attention on providing member services by reducing your current administrative burden. This is great news for chapters.

Here’s the letter that was sent to chapter leaders: 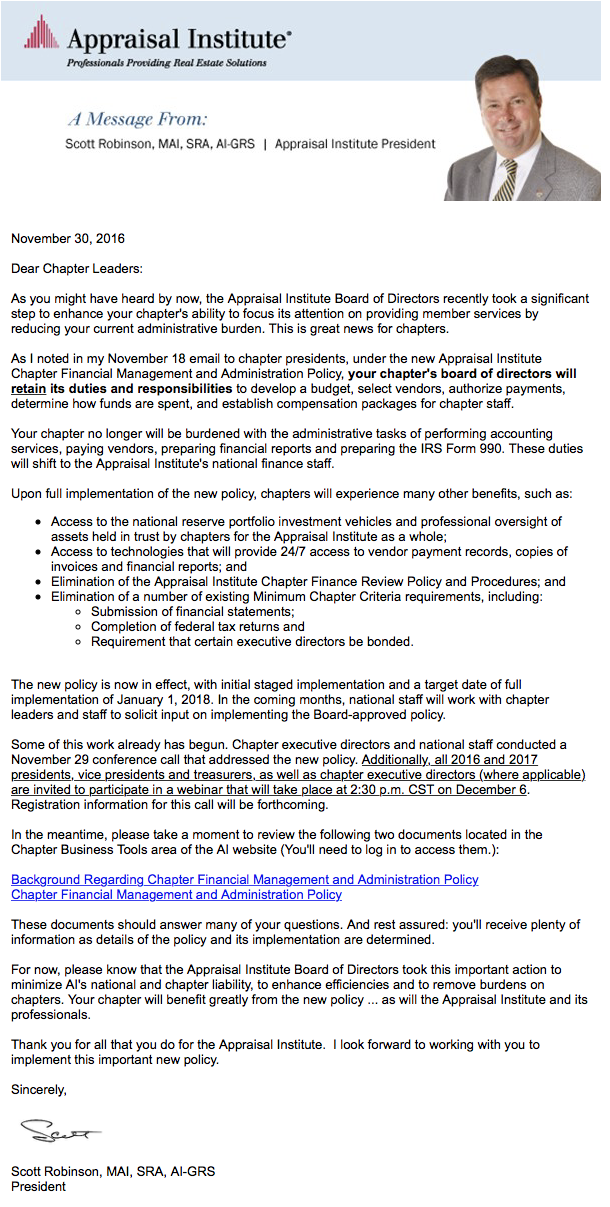 It reminds me of an old IRS joke: The IRS agent walks into your office with arms extended for a handshake and says:

It has been discouraging to watch the Appraisal Institute (National) [1] erode into irrelevance while the appraisal industry is crying out for leadership at a seminal moment in our history. Dodd-Frank is about to be gutted and appraisal management companies have run out of appraisers willing to work for half pay. Instead they have morphed into a trade group that is unable to help its members. I challenge my readers to provide any evidence of such leadership since the financial crisis.

One of the only remaining redeeming features of the Appraisal Institute aside from their SRA and MAI designations has been the strength of local chapters. It’s where the rubber hits the road, where appraisers press the flesh at local meetings, take classes and listen and interact with guest speakers. The real value of AI membership remains at the chapter level.

At the Appraisal Institute headquarters in Chicago (National), they clearly recognize the power of the local chapters. For an organization that has been encumbered by procedural minutae [2], they developed the ability to enact policy without input or oversight. Here’s the current controversy over a non-vetted decree from National that involves money.

National has enacted a new policy that requires all money at the chapter level be administered by National. It’s a political power grab that will further alienate dues paying members. This is part of the growing pattern of AI’s lack of communication to their members.

The very large New York Metro chapter responded in a letter from their board 2 days later – about being blind sided by the new policy. It’s an incredible read – a full-on indictment of the thinking of National. So many great appraisers in that chapter but how long will they put up with this? You can see how hard the local chapter is holding back it’s anger for such a policy. See link for pdf or the full text below. Bold emphasis provided by me.

Dear Members of the Appraisal Institute Board of Directors:

This letter is being submitted on behalf of the Board of the Metropolitan New York Chapter of the Appraisal Institute as a response to the National Board’s recent decision to implement a new Appraisal Institute Chapter Financial Management and Administration Policy. The Metro New York Board met this week and unanimously agreed to communicate our disapproval of the new policy and our astonishment that such a major change could be effectuated without any sort of prior notification or consultation with the Chapters and the Membership. Furthermore, to announce this decision as a fait accompli late on a Friday before a holiday week is alarming to our Chapter’s Directors.

The Metro New York Board finds it surprising and unacceptable that such a significant policy change in the governance of Chapter finances could be constructed without any transparency, input or dialogue with the Chapters and Membership. Simply being informed that national will take over our Chapter funds, albeit with assurances of our continued control of our finances, is outrageous paired with the admission that “Adjustments may have to be made to the policy as implementation progresses.” By creating this plan, effectively behind closed doors, you have not instilled any sort of confidence that the policy you are demanding we accept is acceptable to the Chapter. Given that the Appraisal Institute has a model for gaining feedback from the Membership – with the 45-day notice model provided for other significant actions impacting Members and Chapters – the Metro New York Board feels it is not at all appropriate for the national Board of Directors to unilaterally create this new policy in such an opaque manner. Given the potentially serious impacts of this new policy on the individual Chapters, we believe a more extended, perhaps 90-day notice would be minimally appropriate particularly given that this change was basically “sprung on” the Chapters on the advent of the holiday season that creates extra demands on all of us.

Beyond our uneasiness with the lack of transparency and how this new policy was implemented, the Metro New York Board finds the policy itself to be unacceptable. We believe that turning over our funds to national would limit and impact the autonomy of our Chapter and potentially diminish our stature in the local real estate community. The Metro New York Chapter is one of the most active Chapters and has been diligent in providing necessary education opportunities for our members and candidates, organizing enriching events for our members and the broader New York City real estate community, and fostering a supportive framework to help candidates work towards their designations. Importantly, this last goal contributes to the health of the organization nationally. Many of these programs are supported by our members through a historically successful Chapter sponsorship program. We believe our success in these endeavors illustrates that we are proficient in managing our own funds, maintaining reserves, and knowing how to do what needs to be done on a local basis. Certainly stripping the Chapter of its funds, particularly under terms that may be subject to change, will undermine the Chapter membership’s confidence that our efforts to maintain the economic health of the Chapter constitute time well spent. Furthermore, several Chapter sponsors who have consistently supported Chapter endeavors have expressed concern about this change in policy and that it may impact their willingness to continue such sponsorships in the future considering the substantial loss of Chapter autonomy as a result of the new policy changes.

While we look forward to hearing more details regarding the new policy from National on Tuesday’s call, the Metropolitan New York Chapter Board strongly urges the National Board to reconsider implementing this new policy.

I heard a rumor that AI wants to do away with chapters and I’ve also been told that is not true – but with the opaqueness of National, I don’t know what to believe. And I keep hearing rumors about AI spending millions to expand their footprint across the globe but haven’t seen any measurable success let alone share the status of this effort with members. Is esoteric global expansion worth raising dues in a compensation compressed environment? Is the membership even aware of this effort and the millions supposedly lost?

Most of my peers nationwide have expressed frustration with an organization mired in self-serving politics. And it only seems to be getting worse.

My moment of zen was their self inflicted and childish exit of the Appraisal Foundation a few years ago. I eventually left AI and moved on to two other organizations that provide what appraisers are looking for. Remember that most of us are “lone wolves” and belong to organizations to get other perspectives. I can’t tell you how many SRAs and MAIs I know are talking about leaving the organization.

And did you ever wonder why there are so many statewide appraisal coalitions popping up? It’s largely because of inaction by National or their opposition to issues important to appraisers.

Lots of graft ensued for the provinces to get their “share” of revenue. In fact one of the reasons there are as many as 40 ghost cities in China right now is because the provinces were incentivized to generate GDP. What better way to do that then to build cities for several hundred thousand residents that would never come.

The moral of the story: central planning is never efficient. Through the loophole that National installed allowing them to modify this policy at anytime in the future is a recipe for disastrous self-dealing.

This is the appraisal industry’s moment to have some impact on our future. There are many challenges in front of us. The Appraisal Institute on a national level is now officially obsolete.

Enough with the self-dealing. We don’t make enough money collectively to fund their boondoggle. We need leadership, not politics.