Buyers at new luxury apartment building One57 could get big, long-term tax breaks thanks to controversial plan

Residents and developers of One57 — a luxury high-rise across from Carnegie Hall that will be the tallest residential building in the city when it’s finished next year — stand to get a whopping $4.8 million annual tax break under a controversial plan that allows abatements in exchange for building low-income housing, financial documents show.

The program, known as a 421a, gives developers long-term tax breaks, and the savings can be passed on to big-bucks apartment buyers. 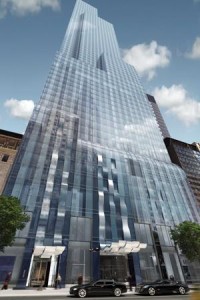 The 421a program generally grants developers tax abatements, usually for 20 years, in return for sponsoring affordable housing equivalent to 20 percent of a building’s units.

The taxes gradually go up as the abatement is phased out.

“We can’t afford to be giving away millions of dollars in tax breaks for nothing,” Lander told CNBC.

The 421a program expired last year but is up for renewal in Albany.

One57, owned by prolific Manhattan developer Extell, applied for the 421a program and then withdrew its application but can reapply at any time, city records show.

Extell — like other large New York developers — has already made lucrative use of the abatement plan.

At five buildings — the Avery, Orion, Aldyn, Rushmore and Ariel East — annual taxes in the first year came to a total of $567,337, according to calculations by Miller Samuel Inc. CEO Jonathan Miller, based on Extell’s original offering plans.

Without the break, the estimated taxes on those five buildings would have been $22,430,543, Miller noted, resulting in $21.8 million in lost taxes to the city.

Extell yesterday defended its use of the program.

“This is not a tax break for billionaires but rather a well-established program designed to provide funds for affordable housing,” an Extell spokeswoman said. “It has provided thousands of units while in effect.

“It has also provided more economic basis for developers to build new buildings in NYC including One57, which has and will generate thousands of new jobs and billions of dollars in economic activity.”

Extell does not build the affordable housing itself. Rather, it buys “421 certificates” on the open market from the builders of the low-income units to whom they are originally issued. The luxury developer then essentially trades the certificates it buys for a 421-a abatement.

The certificates Extell planned to use for One 57 funded about 244 low income housing units in the Bronx, records show.

The 421a program has come under fire by critics who contend the huge tax breaks draw much needed funds from city coffers.

In 2010, the abatements resulted in nearly $755 million in foregone taxes, according to the Pratt Center for Community Development.

IN 2011, the breaks “would have been enough…to prevent all the teacher layoffs, keep every firehouse open, prevent a $100 million cut to city libraries and still leave $150 million in change,” Pratt Center claimed.