U.S. Housing Has Been Making A Bad Situation Look Good

This is clearly a good example of making a bad situation look good.

Douglas Elliman [2] Real Estate published our research on new signed contracts and new listings in four U.S. regional reports. They are a new part of our growing Elliman Report Series [3] that I began writing 25 years ago.

These monthly reports break out each market’s performance by eight price tranches on a year over year basis and are a supplement to our quarterly report series.

Manhattan
The number of new signed contracts by property type continued to trail year-ago levels but are also continuing to rise from April lows.

Pinellas County and Hillsborough
New signed contract activity for single family and condos remained higher than year-ago levels but showed signs of peaking. In general, there were larger year over year increases in new signed contracts in higher price tranches.

The California report contains the counties of Los Angeles, Orange and San Diego.

Howard Lorber, Executive Chairman of Douglas Elliman, talks to CNBC about the results of our four August 2020 Elliman New Signed Contract Reports. Most importantly, he gives me a shoutout!

Diana Olick talks about the results of our August 2020 Elliman New Signed Contract Report for Florida. Most importantly, gives me a shoutout. 😉

A Bloomberg Opinion Piece That Mirrors My Take On The ‘Exodus’

A decade or so ago I interviewed Justin Fox on my old podcast The Housing Helix that I keep threatening to restart. Justin now writes for Bloomberg Opinion and I appreciate his “fuzzy logic” writing style when there are a lot of holes in the available data.

His op-ed piece The Big-City Exodus Isn’t Very Big (Yet) [12] mirrors the way I think about the ‘urban to suburban’ outbound migration in NYC metro. I actually see it as ‘Manhattan to suburban’ migration because markets like Brooklyn are booming.

The key point of the article is that it only takes a small outflow from the city to cause havoc in the suburban markets that surround the city. Many read a headline that says something like sales in the suburbs are up 100% and think that must mean that sales in the city fell by 100% to zero and by October there will be 5 people left.

In The Neverending Pursuit of Shallowness, I Got My 16th Mention On The Front Page of the New York Times 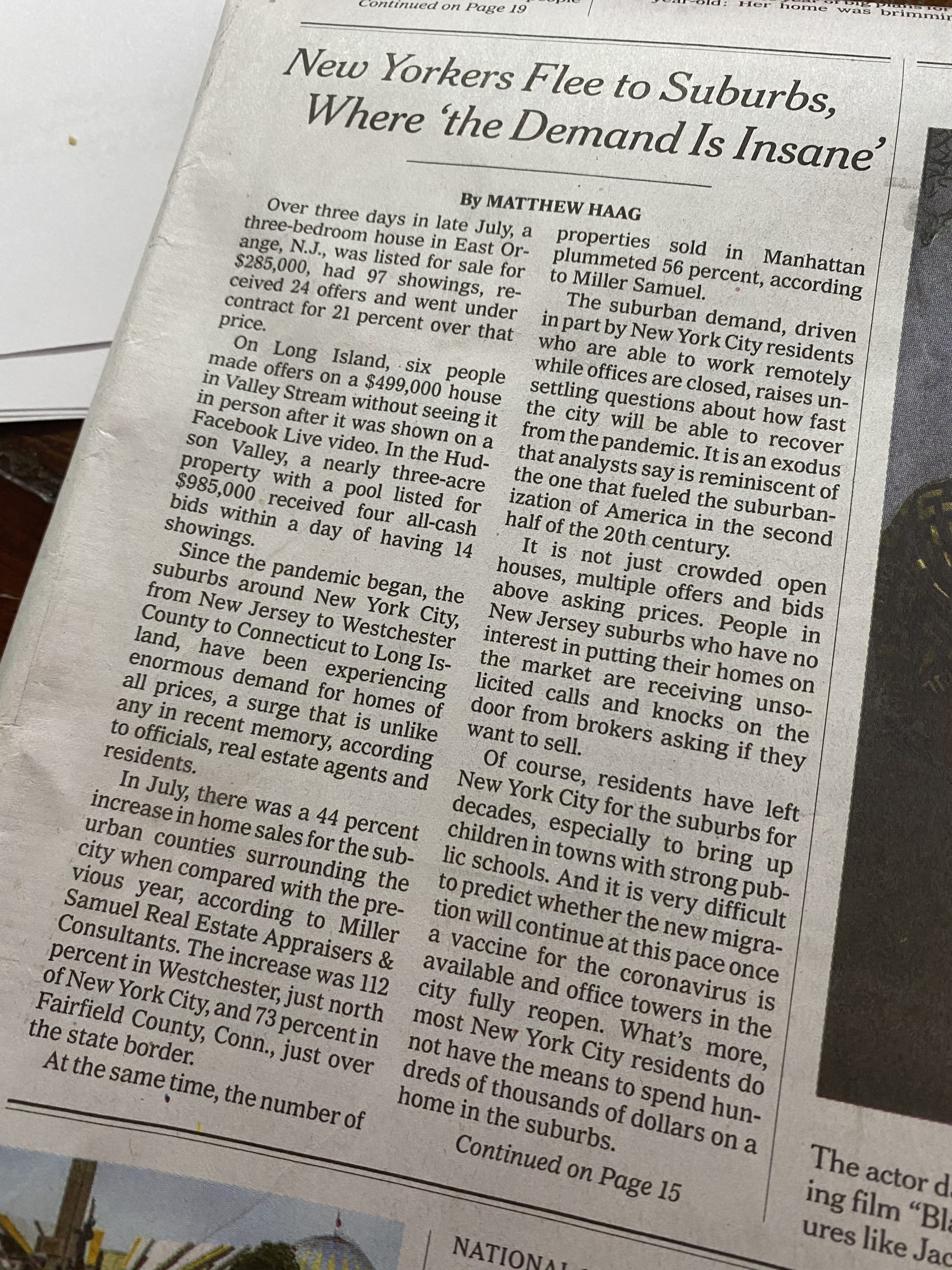 In the frenzy of news coverage of the COVID-19 impact on the New York City housing market that has dominated my professional life since mid-March, it felt good to stop and feel satisfied when something special happened. Special to me only. Something that makes that moment stand out in the daily ritual of an endless groundhog day.

When I was contacted for a recent housing market story by the NYT, I had no idea it would end up on the front page (A1) of the Gray Lady [14]. I later saw the story online [15] and thought nothing further of it. A few days later I was reading the print version and happened to notice the same article was sitting on the bottom left corner of A1 and my company’s name was right there in front of me. Boom. 16th.

Ok, now that’s the past. It was fun while it lasted. Now back to work.

A Rent vs Buy Index That Beats The Big Mac Index

While I’ve always “enjoyed” Big Macs and following the Big Mac Index [16] created by The Economist Magazine back in 1986. It is even more interesting (but not technically “fulfilling” to run into a housing index I wasn’t familiar with.

I was reading an article in Bankrate: This index shows where you should buy a home, and where you’re better off renting [17] (admittedly the stock photo of the West Village of Manhattan at the top caught my attention too).

The College of Business at Florida Atlantic University developed a rent versus buy index with an easy to remember name: “Beracha, Hardin & Johnson Buy vs. Rent Index [18]” or “BH&J” for short. It looks well researched and transparent, with a methodology and the raw data to download. The series goes back to 1982 which is quite unusual since it is rare to see a housing index that precedes 2000, or even 1990.

Despite the surge in home prices, the U.S. index has remained at about the same threshold for the past three years. The NYC index (5 boroughs) hasn’t entered the rental threshold since the financial crisis. 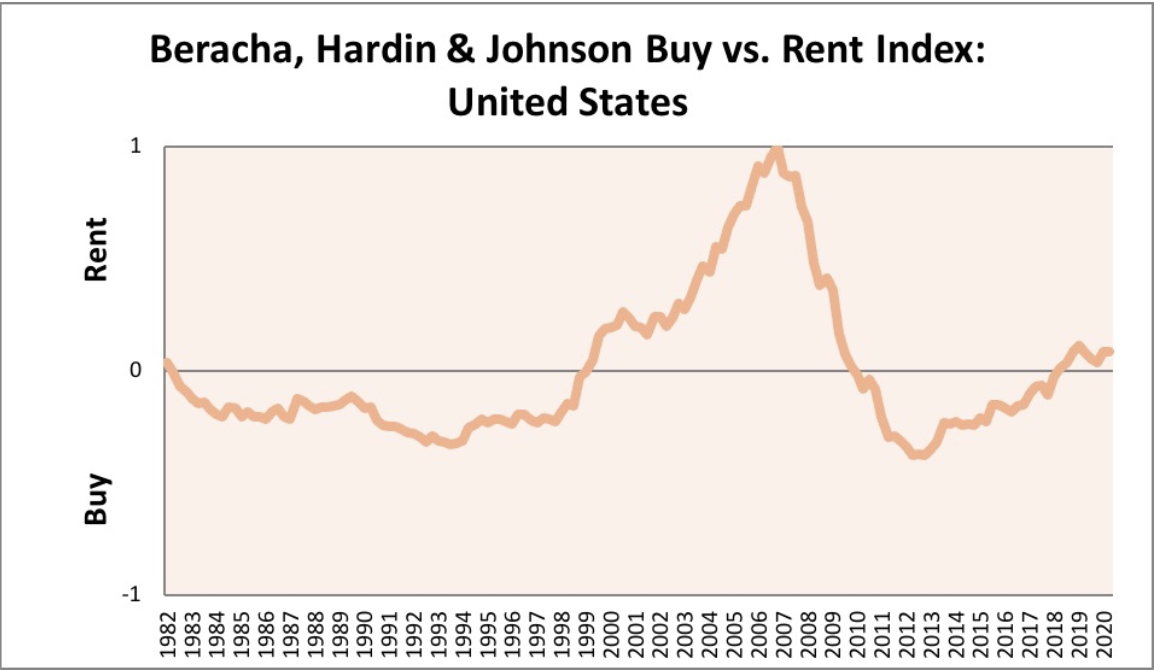 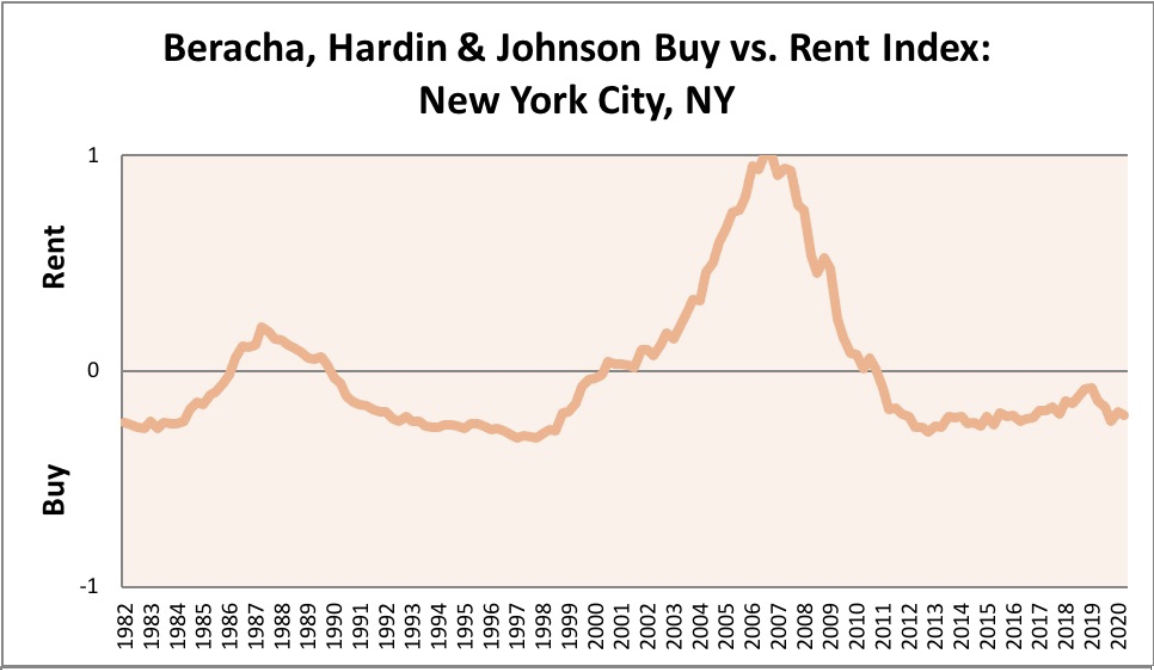 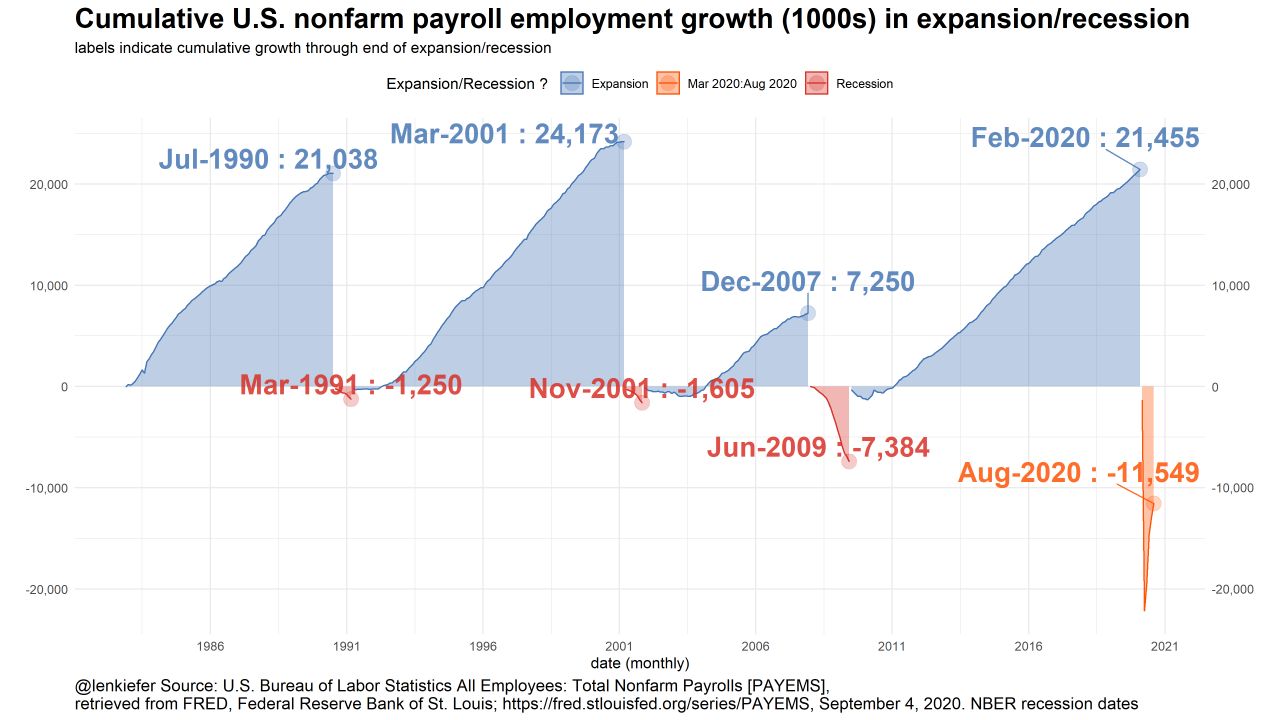 What’s In Store For New York City Real Estate in 2020 and Beyond!

I’m joining my friend and co-data nerd Noah Rosenblatt of Urban Digs for a live 1 on 1 discussion moderated by John Walkup, also of Urban Digs.

Urbandigs is a great resource and I love to connect with these guys. Register [23] and mark your calendar for September 17th at 11 am! 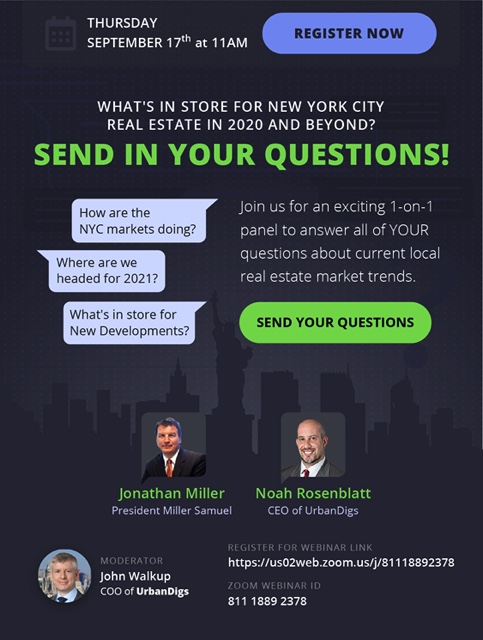 The Counselors of Real Estate® Presents: What’s Next for Real Estate and the Life Experience

Here’s an interesting free and open to all webinar [24] I highly recommend: 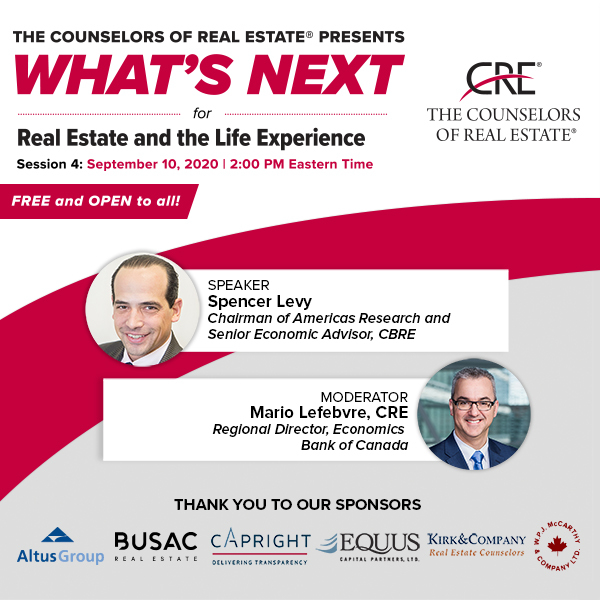 Big news. The California Office of Administrative Law has accepted my petition to compel a required rulemaking for the 2020-2021 Uniform Standards of Professional Appraisal Practice. Without a rulemaking, USPAP is a so-called “underground regulation [26]” in the State of California. The petition was accepted on September 1, 2020, and is now under review. You can find the case here [27]. I now need your help.

P.S. If you’re interested, email me and I’ll send you a copy of the petition.

(LOS ANGELES, September 1, 2020) – A petition to the State of California to submit the 2020-2021 version of the Uniform Standards of Professional Appraisal Practice to a required notice-and-comment rulemaking cleared its first hurdle today. The matter is now under review by the California Office of Administrative Law. You can locate the case here [27] under OAL File Number: CTU2020-0817-01.

The petition calls for a rulemaking, which includes a state-mandated promulgation in the California Regulatory Notice Register, a cost-benefit analysis and compulsory sign-offs by the Department of Finance and filings with the Secretary of State’s Office. In short, it requires a state agency, the Bureau of Real Estate Appraisers, to comply with California law. The Uniform Standards of Professional Appraisal Practice is what the California Office of Administrative Law calls an “underground regulation,” due to deficient rulemaking.

A side benefit: A rulemaking will give a voice to the mortgagors, employees, depositors and investors in the 200 banks doing business in the state; members and employees of the 300 credit unions headquartered here; the state’s 10,000 licensed real estate appraisers who must contend with continual regulatory changes; state and local agencies that rely on eminent domain; property owners who have been (or will be) subject to eminent domain; and personnel in the offices of the state’s 58 county assessors. Also given a voice will be the investors in so-called community facilities district bonds. USPAP appraisals are often the centerpiece of the bonds’ official statements.

Moreover, it is an opportunity for appraisers to go on record about definitions in the new version of the standards. One new definition has rankled many.

The paid panelists of the nonprofit Washington, D.C.-based Appraisal Foundation do yeoman’s work but the California Administrative Procedure Act and the California Code of Regulations, Title 1, § 20, “Incorporation by Reference,” do not allow an open-ended delegation of the people’s business of California to private persons. A state rulemaking is required for each revision of any outside standard incorporated into a state regulation. This is a key safeguard for this very reason.

If you’d like to help, here’s something you can do:

Please email the California Office of Administrative Law at staff@oal.ca.gov [28] and express your interest in seeing a notice-and-comment rulemaking pursuant to the California Administrative Procedure Act and the California Code of Regulations, Title 1, § 20, “Incorporation by Reference.” Please refer to “underground regulation” OAL File Number: CTU2020-0817-01. By doing this, you are not necessarily rejecting the current version of USPAP. You are simply insisting California follow its own administrative laws. You are also supporting Californians in exercising their rights, guaranteed by state law, to go on record in the state register about the 2020-2021 version of the copyrighted standards and each future version of them. Californians deserve state agencies that adhere to state law.

The culmination of two years of research, a new book, Dispatches from the Cosmic Cobra Breeding Farm [29] by Jeremy Bagott illuminates over-the-top spending and questionable dealings at the Appraisal Foundation. Published just before the pandemic, it chronicles international jet-setting by officers and trustees, conflicts of interest, lobbyist tie-ins, outsized cash reserves and swollen pay at the tiny nonprofit. The book is available at Amazon in paperback and Kindle versions.

TAF Newsletter: Still Saying They Were Justified Applying For PPP

From Monday’s Appraisal Foundation Newsletter – a letter from president Dave Bunton who can’t stop talking about returning PPP after it came to light.

Like all organizations across the United States, the early months of the pandemic were full of economic uncertainty. Out of an abundance of caution, The Appraisal Foundation applied for and received a Paycheck Protection Program (PPP) loan. As the economy stabilized, it became clear that we would not need the PPP funds, so we have paid off the money we received.

It’s not transparency when someone has to keep justifying their actions.

TAF president Dave Bunton has made it a point in the last two monthly newsletters to mention TAF created a “Diversity and Inclusion Subcommittee” which is great if it actually accomplishes something.

The Appraisal Foundation Board of Trustees added a Diversity and Inclusion Subcommittee in April of this year, one month before the death of George Floyd, which highlighted some of the inequities experienced by Black Americans.

The thing is, the Appraiser Qualifications Board (AQB) hasn’t had a minority member and only 3 women in decades of existence.

I really hope that this subcommittee is more than just window-dressing. Adding diversity to the AQB that is short 2 members, could be accomplished in weeks, not annual board cycles.

Abraham Lincoln was the first to say “actions speak louder than words.”

Because Dave Towne is always looking out for appraisers’ best interests faster than anyone around, he sent this before I actually got my email notice from Fannie Mae.

On Wed, 9/2/2020, FNMA has updated their policy allowing for ADU’s on SFR properties to be a Manufactured Home.

This is in their Selling Guide Announcement SEL-2020-05, linked below.

An accessory dwelling unit (ADU) is an additional living area that is independent of the primary property and has basic bathroom, cooking, and sleeping facilities. With this update, we clarified ADU property eligibility and comparable sales requirements in the appraisal as follows:
▪ expanded the current definition of an ADU to improve proper classification of ADUs;
▪ expanded property eligibility by allowing multi-width manufactured homes titled as real property to be eligible as an ADU; and
▪ allow appraisal flexibilities that now include the use of
• an aged settled sale to demonstrate market acceptability, and
• an active listing, or a pending sale as a supplemental exhibit to show marketability.

Effective: Lenders may take advantage of these updates immediately.

It was an honour to be part of the most #EPIC [31] #ROCK [32] in battle in #HISTORY [33]! With the most awesome, fun, kind and legendary #DaveGrohl [34]! Thank you for giving me this incredible opportunity. I am extremely grateful. The Rock Gods of old are happy! @foofighters [35] @crookedvultures [36] pic.twitter.com/Fyk4AyQ7pg [37]

If you need something rock solid in your life (particularly on Friday afternoons) and someone forwarded this to you, or you think you already subscribed, sign up here for these weekly Housing Notes [39]. And be sure to share with a friend or colleague if you enjoy them because: