Labor Day weekend has more or less begun for many, at least mentally, and it is time to reset and think about the faster moving business environment in the coming weeks. I’m sitting in a Starbucks in a Detroit suburb right now, in town for a wedding and theoretically on vacation. My wife and I just dropped our youngest son off at college so I need to get a couple of emotional things off my chest first.

This chart spoke to me. 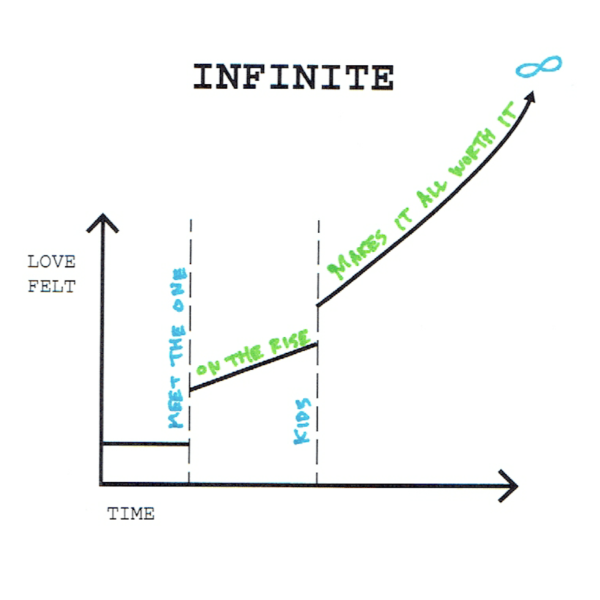 And so did this Instagram video (unless you possess no humanity).

‘Glut’ Has Become The Most Powerful Word In Media Housing Coverage

A few days ago, the New York Times front page included a housing story by Charles Bagli on the overbuilding of Brooklyn rental development: ‘The Market Is Saturated’: Brooklyn’s Rental Boom May Turn Into a Glut. I call this front page story a ‘milestone’ piece which plants a flag in the timeline of housing history. Michelle Higgins wrote one of these back in July for the residential market In New York, a Falling Market for Trophy Homes in the Sky.

Of course we know that U.S. existing single family inventory remains super tight but in urban markets we are building too much high end rental and condo product.

Here was the underlying data I provided to the Times for the page one story. The numbers show how rental prices are rising much more sharply in lower priced segments, largely because the newly developed product is skewed to the high end and supply in the other price segments are much more inelastic. It is a powerful and telling trend – NYC is creating housing that doesn’t match demand. Hence we have a housing affordability crisis.

I’ve noticed that use of the word ‘glut’ gets the ire of the real estate industry up largely because it changes a comfortable narrative into an unknown and firmly articulates what is obvious when self interest is set aside. I also notice that the blogosphere tends to include the word ‘glut’ in their followup stories where the source uses “glut.” We see the same thing occur with the word ‘gold’ in economics blogs. In other words, ‘glut’ is the new ‘gold’ in housing parlance.

Use of the word ‘glut” in these milestone pieces generated a whirlwind of discussion in 2016 and there are others as well:

There is something about the word ‘Glut’ that seems to say it all about excess supply. It’s a four-letter word after all. Speaking of excess supply, I thought I’d mention that this week’s New York Times cover story was my 14th time on A1. In other words, I hit gold.

Two years ago – at what I now call ‘peak super luxury condo’ – the historic Waldorf-Astoria Hotel was purchased by Anbang, a huge Chinese insurance company. I was interviewed a number of times about this in 2014 and there was a lot of discussion about a potential super lux condo conversion. Earlier this year, the owners announced plans to convert 1,000 rooms to super luxury condos. Many observers of the market were confused since the timing couldn’t be worse. By 2016 it was clear that the super luxury condo market was suffering from significant excess supply (glut). Why would the owner make such a move? There was no logical answer.

Now it is clear, at least to me. The owner, Anbang, is going IPO so it looks like this was an effort to create eye candy.

When a housing move doesn’t make sense, we should just assume we don’t have all the facts so just paint your house instead.

In this week’s Curbed NY Three Cents Worth column I focused on aggregating the average size of a rental or co-op/condo apartment transactions since 1991.

Curbed NY Three Cents Worth Column: How Manhattan apartment sizes have changed in the past two decades

Here are the key observations:

• During the 1990-1991 recession, the low end of the sales market dropped off, skewing the average size higher as unemployment and high interest rates shut down demand. The flood of stalled conversions and foreclosures were largely centered in the entry-level market and it took a number of years to sort out.
• The housing boom/bubble period of 2003 through 2008 saw average sales sizes edging higher, but those were kept in check due to falling affordability. Prices were rising so quickly during this period that a lot of the new apartments skewed smaller to keep affordability from hurting sales volume. A 1,200-square-foot two-bedroom might have become a 1,125-square-foot 2-bedroom at the same price per square foot, resulting in a lower overall sales price. Otherwise, there would have been a rapid growth in average sales size during this period.
• The post-Lehman market—roughly from 2009 through today—saw a slightly larger sales size than during the housing bubble, even though the new development space has introduced radically larger units. But still, keep in mind that this era of large super luxury units, say above $5 million, only represents about eight percent of the market.
• During the period shortly before and after Lehman, the average rental size spiked, not because larger units were in higher demand, but because entry-level rental activity briefly collapsed. By 2012, the average size of a rental returned to housing bubble levels—around 1,000 square feet—and has remained fairly stable through today.

Paying (not Praying) for a Shorter Commute

Carl Bialik at FiveThirtyEight and former ‘Numbers Guy” columnist (a fave) at WSJ called me to weigh in about a study that valued commuting time.

In 1990, my wife and I moved from Manhattan to the Fairfield County, CT suburbs. I remember looking at housing prices and observed that as one moves outward past the Stamford, CT commuter train station, housing prices fell $100,000 every 10 minutes. It provided a clear lesson on the value of location/commuting time. I ended up using the same logic when we moved our company offices in 2003. My location requirement was to have less than a 10 minute walk from Grand Central Station (hey, I’m the CEO). By moving 5-10 blocks further away, we could have saved a few thousand a month so that amount became the premium location cost of my closer walk.

Here’s are the results of the commuter study Carl wrote about: 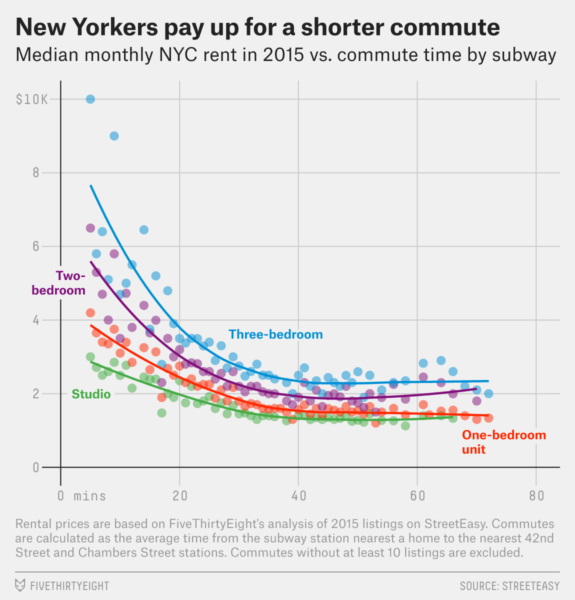 It’s been a quiet week in Appraiserville. Most of our clients have headed out for the holiday weekend. However we did get this request from a new employee at private banking group we do a lot of appraisal work for. It reminded me of a request I might have received during the housing/credit bubble.

Would you be able to send us unsecured versions of the appraisal PDF’s. it would make it easier for us to complete our process.

First of all, pdf encryption is the easiest thing in the world to crack for free so they could do this themselves if they really wanted to. The idea of asking an appraiser to authorize this is masked in fraud. What internal process could be made easier other than changing items on the appraisal report without our knowledge to make the deal go through?

It was inconsistent with our client’s ethics and we politely declined and then spoke to the head of the group who was mortified at the employee’s request. Appraisers can not be afraid to point these things out but not take the path of righteous indignation that is all too common (I’m guilty of that on occasion).

Coincidentally, as I write this post, the guy next to me in Starbucks is a mortgage broker talking down a seller from a cliff after the home inspector and appraiser referenced evidence of significant mold during the inspection. I wonder if an AVM can detect mold? That would be a great idea!

To be clear, that “Appraiser Shortage” narrative is an attempt at misdirection by the financial services industry to replace appraisers with Automated Valuation Models (AVMs). It is an insultingly dumb argument. To be clear, there is a shortage of appraisers willing to work for half the market rate. That’s a completely different point and targets the fallacy of the AMC mortgage appraiser model.

Here are some old AMC article chestnuts from my Matrix blog that provide context to the discussion today about an “appraisal shortage.”

An amazing experience for the best residential appraisers in the U.S.

Please consider attending the 2016 RAC Appraisal Conference this month. You can find out more information here. I’m the incoming RAC president and I can assure you it is worth your while.

If you need something rock solid in your life (particularly on Friday afternoons) and someone forwarded this to you, sign up here for these weekly Housing Notes. And be sure to share with a friend or colleague if you enjoy them. They’ll have a train deliver their meals, you will avoid the dark patch in your life and I’ll ask for your autograph without tearing up.

Have a great holiday weekend and see you next week.