In our previous home, it seemed as though we had a power outage every time there was a substantial rainstorm. Most of the outages didn’t last too long. When we returned home from an evening out or a week’s vacation and the clocks on the appliances were blinking, it was clear that the power cut out. But we didn’t know whether it was off one second or one week – and your re-frozen food might be spoiled. So just place a quarter on a cup of ice and worry about other things. There are so many analogies to work with here but I don’t want your brain to get spoiled either. 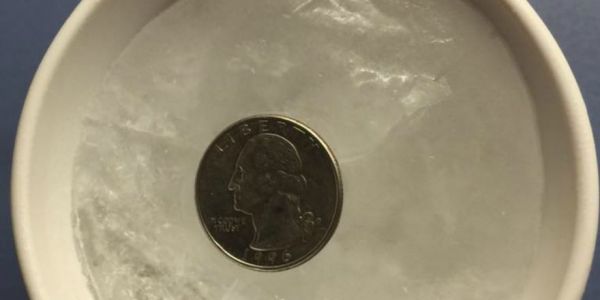 If you’d rather use the cup for coffee instead of frozen quarters, here’s a good primer on popular coffee types as long as you realize its a lot harder to create them with the power off.

August 2017 NYC Rental Analysis is out

But first, it’s all about the chart. Bloomberg covered the report results and conveyed rising inventory with this chart 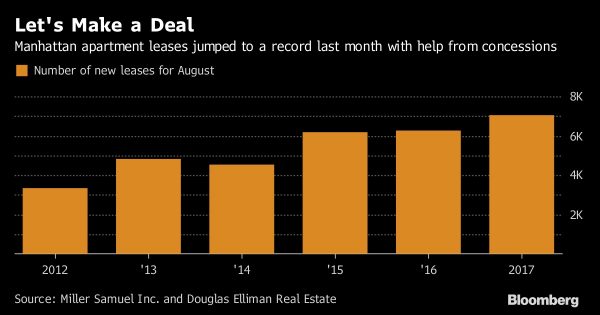 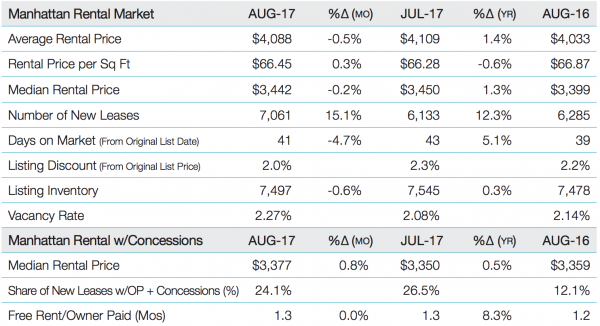 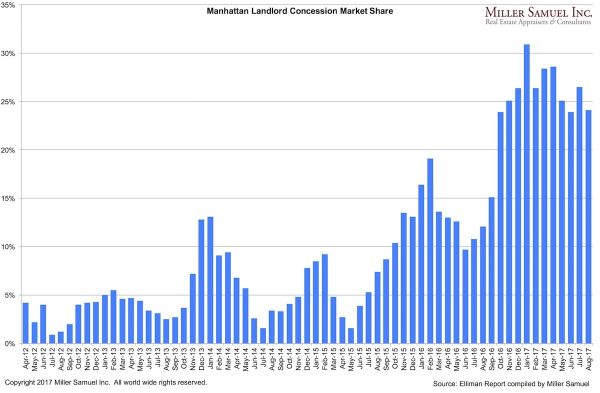 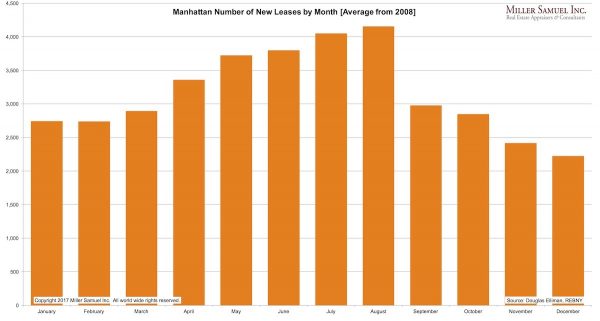 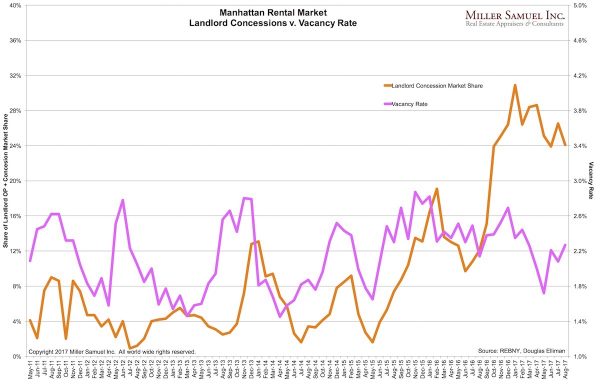 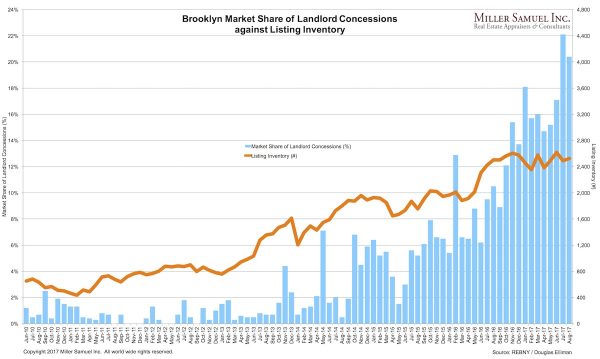 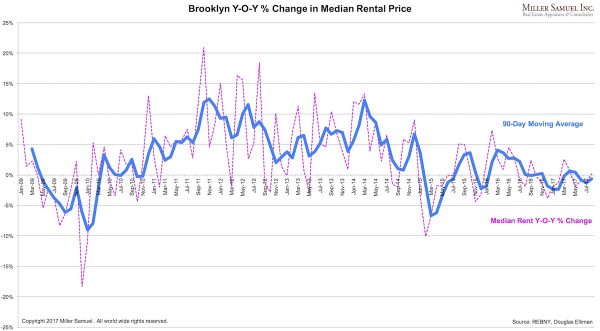 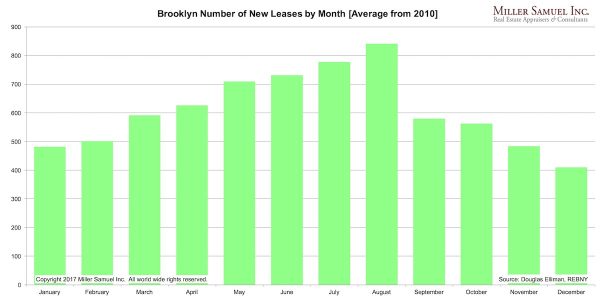 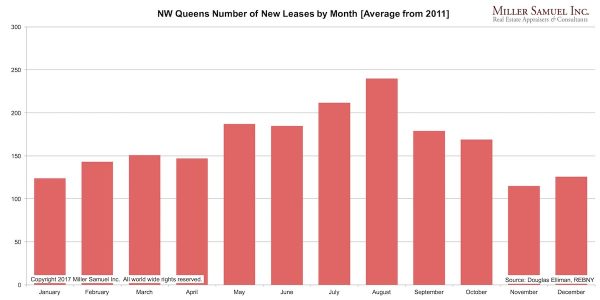 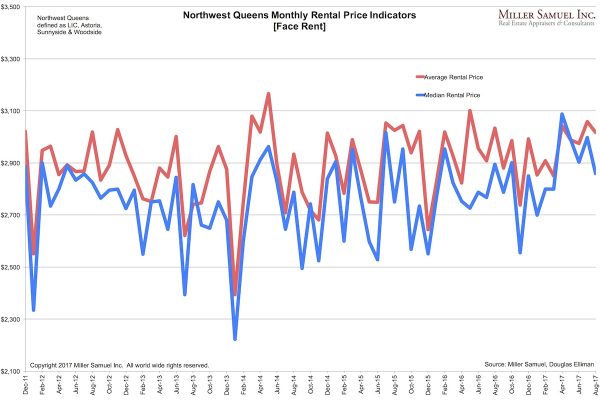 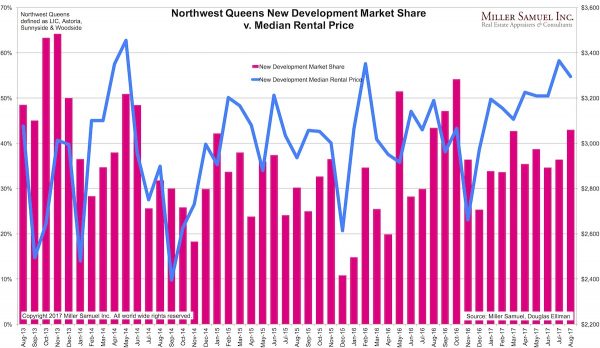 Butter or Margarine, Suburbs or City

We’ve been told many things throughout our lives that are suddenly reversed. This is the case in the Suburban v. Urban debate. Yet as Noah Smith writes in Bloomberg View: Maybe Cities Are the Future of Suburbs

Richard Florida’s recent claim that the urban boom driven by the “creative class” is over because it dispenses with affordability. But as Noah says,

the great urban revival might not be ending, it might just be relocating. Instead of piling into existing cores, Americans might simply be creating new ones across the country. And if each of these new cities creates the productivity advantages enjoyed by places like San Francisco and New York City, this could be a good thing for the economy.

This fact demonstrates how silly it is to rely on national housing market reports. 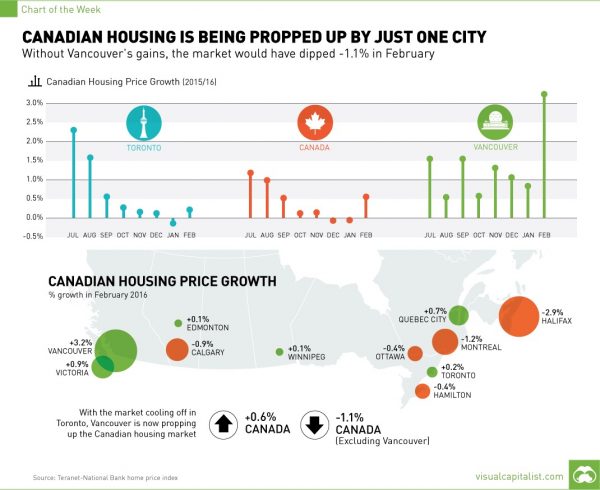 It’s hard to believe that it’s been 16 years already since 9/11. The name of the attack is now referenced as a noun and every year I think about the events of that day – getting emails from out of state friends and colleagues asking if I was ok, with one asking if I was still alive; Watching the second tower fall; walking to Fifth Avenue and then to Sixth Avenue to see the towers in flames; No cell service; losing all access to public transportation; literally walking northward out of Midtown with throngs of others; getting a lift from my friend’s mom to Westchester county, then borrowing the car to get home to my family in CT; Debriefing with my neighbors who were standing outside like everyone else trying to learn what happened; learning that a parent of my of my son’s classmates was in the tower; hearing stories from neighbors who were talking to someone on the phone in the towers when a plane hit and the line went dead.

It seemed that everything I knew was going away and never coming back. Yet NYC showed me it never quits and I’m proud to be part of it.

Here is my interview with Tom Keene on Bloomberg TV last Monday on the resurgence of downtown over the past 16 years.

UPDATE Immediately following the television spot, I walked over to their radio studios and spoke with Tom again as well as David Gura. My interview with Tom Keene and David Gura on Bloomberg Surveillance Radio so click on the graphic below and go to the 10-minute spot:

Voice of Appraiser Gets into the “weeds”
…with Sacramento Appraiser Ryan Lundquist’s version of “Appraiser Madness.” Phil Crawford’s interview explores Ryan’s experience – become known for a certain type of expertise and think about diversifying away from sole reliance mortgage appraisals.

Appraisal Industry Letters to Party Leaders of House Committee on Financial Services and Senate Committee on Banking, Housing and Urban Affairs on “No Appraisal” Waivers

The Appraisal Institute led the charge for the industry to write letters to the House and Senate that were critical of the GSEs new “no appraisal” waiver programs.

Here are the letters sent the to the house and senate leadership that provide oversight for FHFA. I don’t think this will change anything yet but it does plant a seed of doubt going forward.

In 2013, Brian Coester of the Coester VMS AMC tweets “we pay the least and get the least qualified appraisers.”

The graphic below was sent to me so I looked for it on twitter and the conversation is still there.

A long dormant appraiser twitter account @insidevalues engaged in a conversation with AMC founder Brian Coester back in 2013.  Brian responded 4 days after the question and then explained the “elite gold club” set up where appraisers would get more volume at a lower price point.  I kept trying to apply sarcasm to Brian’s (he has blocked me even though I don’t recall ever engaging with him?) responses to explain the context, but he would subsequently prove me wrong or he simply is clueless about social media nuances like sarcasm.  After Brian engaged with this appraiser, the appraiser continued to tweet at him lulled into the false assumption that Brian would see the error of his ways and change his business model to fairly compensate appraiser to maintain a higher quality level.

This is a cavalier conversion about how an AMC can view an appraiser yet the industry doesn’t don’t talk like this in public.  We’re the widgets in their factory and the lenders are either clueless or don’t care because of the federal backstop.  It’s incredibly insane that most of the mortgage lending food chain doesn’t get that this is the norm. If you need something rock solid in your life (particularly on Friday afternoons) and someone forwarded this to you, or you think you already subscribed, sign up here for these weekly Housing Notes. And be sure to share with a friend or colleague if you enjoy them. They’ll make the perfect flat white, you’ll finally go with butter and I’ll place that quarter back in my pocket.