It’s the end of summer, and there isn’t much news on housing in the context of Hurricane Harvey – so this will be an abbreviated Housing Note (except for appraisers). Harvey has reminded us of its predecessors including Katrina and Sandy, with the latter having a direct impact on where I both live and work. I found the slew of Houston citizen rescuers inspiring, representing the best of what our country has to offer. Oh, and the fish.

I donated to the relief effort through NFL player J.J. Watt’s fundraiser for Houston at youcaring.com which went viral – he started with a modest goal of raising $200,000 but has now received over $14,000,000 – inspirational.

Because everything is bigger in Texas, here are a couple of things to consider for context: 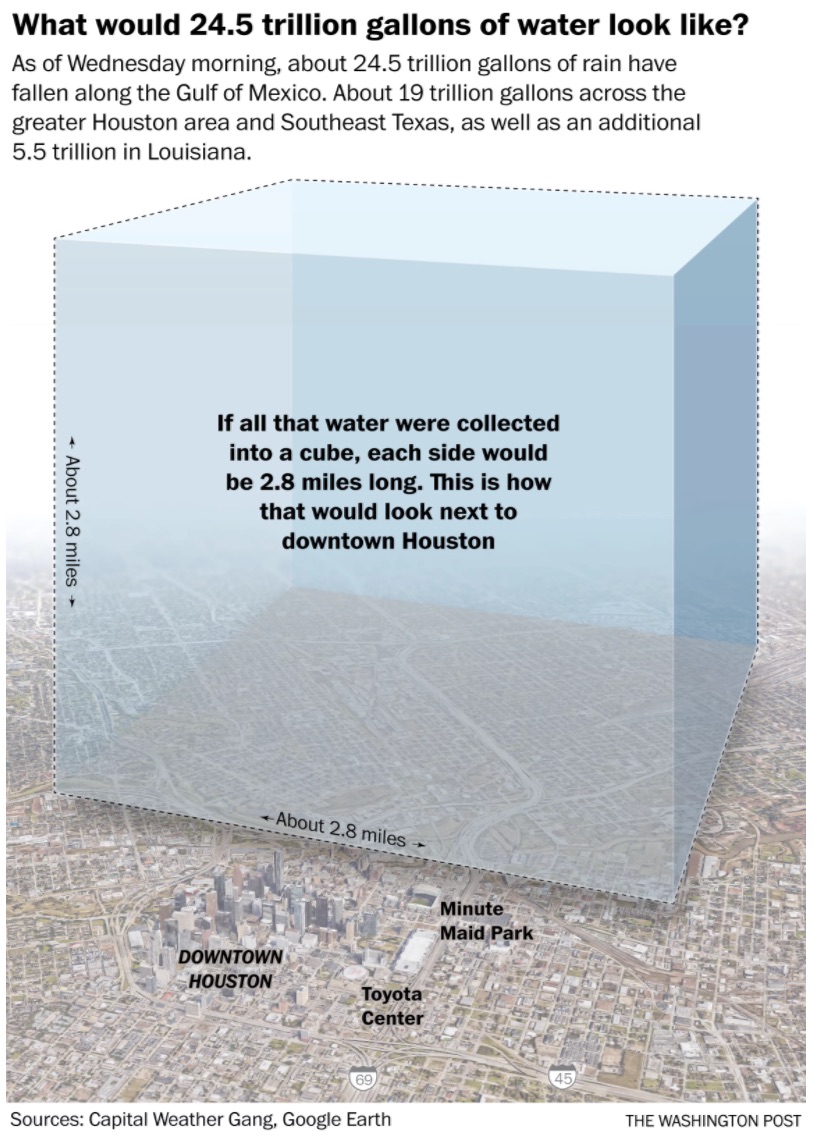 Although it was not heroic in the context of the first responders, I found the following video riveting. It followed someone trying to save his cars and possessions in his home. He was calm, clear thinking and did what he could with what he had as the water continued to rise.

ok, back to dry land…

Can we please stop talking about rising mortgage rates as a threat to housing? As I’ve been saying for more than a year – the market doesn’t believe the Fed and their push for higher rates. It is amazing to think that television pundits were routinely calling for four rate increases earlier this year. Ridiculous. Don’t get me wrong though. Higher rates will be good for housing once they are earned, economically speaking. They’ll substantiate more normal credit conditions which should more than offset those that are priced out by higher rates. 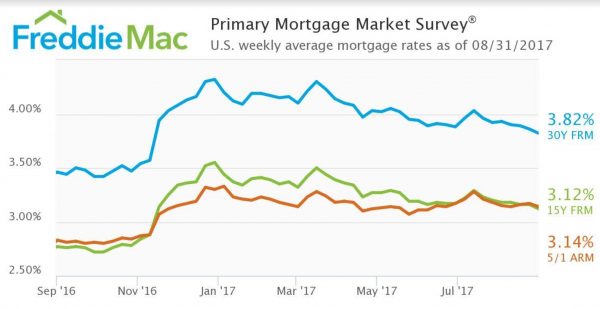 Yields have been range bound as rates this entire cycle, haven't seen a 5 handle on the 30 year fix since early 2011 pic.twitter.com/vHfbobfB8f

Job growth has been sputtering this year… 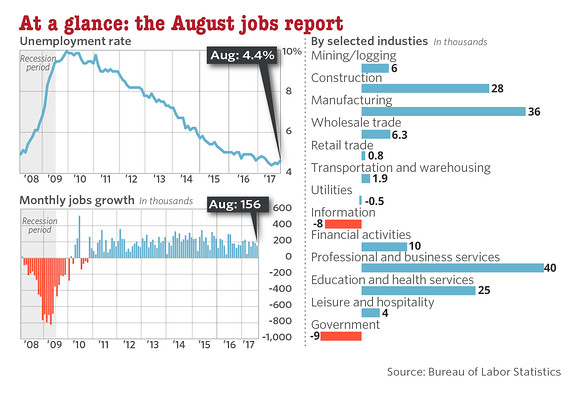 And the US Dollar is weakening…

But it remains far from 2014 levels when foreign nationals were snapping up newly built Manhattan condos.

The US Treasury’s Geographic Targeting Order removed the workaround for entities purchasing real estate above certain thresholds without a mortgage by now including the use of wire transfers. FinCEN is trying to stop money-laundering, and kleptocracy purchases of real estate in the U.S. Newly developed high-end real estate was a preferred way accomplish this until recently. FinCEN has been hard selling the benefits of this since it began in 2015.

Such purchase is made, at least in part, using currency or a cashier’s check, a certified check, a traveler’s check, a personal check, a business check, or a money order in any form, or a funds transfer.

Have a great holiday weekend!

There are a lot of great links for Appraiserville below, and I’ll talk about them over the next few weeks. But right now, there is some more timely business to attend to. I’m even skipping over the revelation that Prince’s favorite color was NOT purple. It was my favorite color all along!

The CEO of the Appraisal Institute for the past decade had resigned. The notice came in the form of an email to the membership of AI (see the bottom of post). I quit AI early in Grubbe’s term – during the chaotic Sellers’ presidency as I saw the organization deteriorate into petty, self-serving squabbles and the specter of threats towards any dissent.

I would like to see the organization survive and even thrive but this will only happen if complicit leadership is purged – just as Region III just tried to push for a few weeks ago.

On a national level, AI National under Grubbe’s leadership ignored its membership for years, especially residential members. This action is only a first step towards returning the organization to its roots of servicing the interests of its membership.

Other leaders that carried the torch for Grubbe need to go. They were part of the problem – this inner circle could have stopped the deterioration of the organization by pushing back rather than carrying the water so to speak. This small inner circle of “leaders” were never really leaders at all. They followed Grubbe’s will and basked in the glow of the power they held in the organization with an arrogance to those outside their inner circle. They may have worked hard, were friendly people on an individual level and may have meant well, but they didn’t appear to question the changing direction of the organization as it hurtled towards failure – where it is now.

I have listed dozens of poor decisions or actions of AI National senior leadership since late last year within this REIC forum but here are some of the key fails:

The following list of these insider names are too short, but I would hope these individuals resign now.

Jim Amorin’s farewell letter to CEO Fred Grubbe went beyond just being cordial. He was really straining to find any accolades of note, thanking Grubbe for bringing “national reserves” to a record high. I’m willing to bet that only a handful of AI membership even knows what that means. I know I don’t. Instead, I prefer to focus on the collapse of membership under Grubbe’s reign, financial mismanagement (i.e., international recruiting boondoggles, speeches in Serbia and Romania, trips to China and the toxic culture that now exists. Only a small number of members trust anything coming from AI National. It is a serious problem in the context of the organization’s survival.

There is so much more needed to get the AI house in order, but this event is one important small step in the right direction. What are next actions of the Appraisal Institute to ensure both survival and relevance?

The membership and chapters need to start pressuring the board of directors to enable the following, or they are directly responsible for the eventual collapse of the Appraisal Institute:

Attached is some very thoughtful feedback from Ron DeVries, MAI, SRA on the AI National governance proposal. The entire letter is attached below. Here is the closing paragraph:

Once again, thanks to the team for putting the recommendations together. It appears, however, as they relate to Education Delivery, the recommendations aren’t ready for prime time. They appear to be a starting point to flesh out a structure that has not yet been developed. This is coming across as “National is going to take over education delivery – what do you think?”

AI Region III Resolution to Remove National Leadership Did Not Pass, But…

An unprecedented action was taken by Region III to remove the CEO and executive committee, but the resolution did not get enough votes. I was told by a chapter president in the region that the sentiment was there, but the consensus was that it was too soon. I also received this note from a member of Region III.

I am sure you already know that Region III was not able to pass the resolution calling for the national leadership resignations. Regardless, the main goal appears to have been accomplished, with the resignation of Fred Grubbe. Region III, however, did pass a resolution to not affirm the GSP pending further study and consideration by the AI membership. The resolution calls for a number of actions by National, and for all chapters to hold meetings concerning the GSP.

This person is sending me the GSP resolution, and I’ll post on REIC when it goes live.

Salt of the earth

We, appraisers are a salty lot, full of cantankerous opinions, frequently attacked by domesticated animals and we are experts at taking pictures of toilets. So who would ever marry us?

Thankfully my wife of 33 years, who is a certified appraiser, spends her time these days as our CFO, managing comp and health care benefits of our staff among other things. This is a perfect match for me according to a visualization shared on Flowing Data. 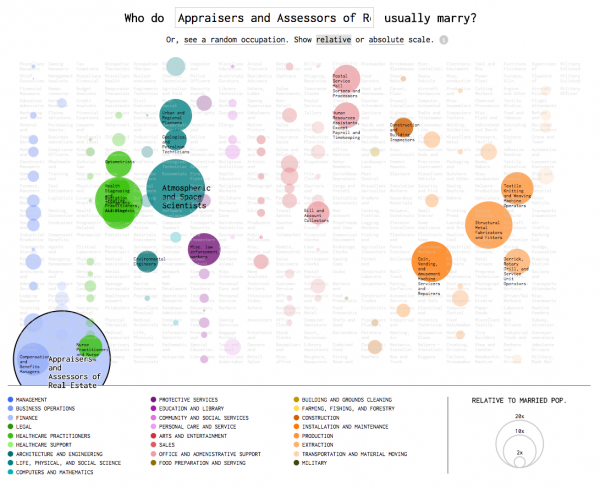 Voice of Appraisal asks us to ponder our future

Lots of things going on in our industry these days and Phil is asking us to reflect a little.

If you need something rock solid in your life (particularly on Friday afternoons) and someone forwarded this to you, or you think you already subscribed, sign up here for these weekly Housing Notes. And be sure to share with a friend or colleague if you enjoy them. They’ll save you from disaster, you’ll donate to the Houston relief effort, and I’ll stay dry.