Better with Butter, A Housing Market McComeback Without Donuts

This week marks the last of my four week quarterly gauntlet of releasing housing research around the U.S. for real estate firm Douglas Elliman (more on the reports later). This Housing Note is admittedly skewed towards the NYC metro area housing market, but hang in there those who are not from around these parts, there are plenty of parallels drawn for your benefit.

Before we get into that, I want to address an issue not specifically related to the housing market but literally sits adjacent to housing (often less than a block away). Earlier this month, McDonald’s introduced Egg McMuffins as a 24/7 menu item. The upside? We don’t have to go ballistic around the 10:30am cut off known as the “murky time between 10:25am and 10:35am when they would randomly stop making them.” But more importantly, butter:

On a similar caloric note, I was playing around with Google Analytics the other day and came up with this list of the top Googled terms that directed readers to our MillerSamuel.com web site.

It’s no coincidence that the 2nd and 3rd terms were donut-related since I went a through period where I was characterizing the housing market as a donut, big on the top and bottom but weak in the middle (I was advised more than a few times that a barbell would have been a better analogy, but hey, I made thousands of donuts in college at the student bakery and I’m not not much of a weight-lifter). I went with what I was comfortable with. And don’t get me started on pizza and the real benefit of Campbell’s Soup (focusing on the painting pictures of cans part)…

Moving on to donut holes…

Housing markets are seeing more pressure in the middle

In many of the housing markets we cover, the average sales price year over year went negative and the median increased (or median rose faster than average), while luxury market prices slipped and overall (not luxury) inventory remained low. You can see this in the matrix table excerpts for a number of the reports. Tight inventory pressed “non-luxury” housing prices higher since much of newly constructed properties are skewed to the high end, placing more price pressure on lower priced market segments that are not being provided new housing stock. 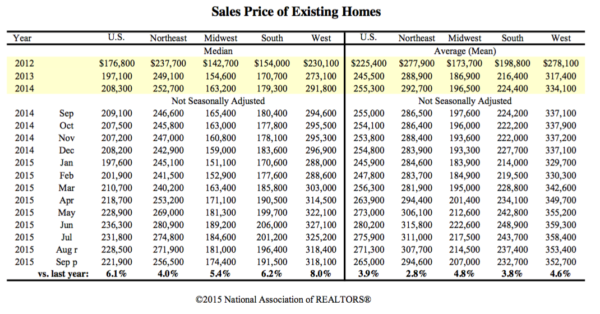 Here’s a quick summary of NAR’s EHS results by Diana Olick of CNBC below. And for once, Long Island gets some national media love over the nearby high end Hamptons housing market.

Sales are rising faster in the suburbs

To extend the Long Island suburban media love fest there was a great article in Newsday and WSJ on the phenomenon. Next week we’ll look more closely at the impact of Super Storm Sandy on the 3 year anniversary.

Incidentally, whenever a media outlet publishes a chart using our data, I yearn for an Egg McMuffin to mark the occasion (perhaps this is the reason for my unexplained weight gain?). When I provide expert witness testimony at 60 Centre Street, I always reward myself with a Coconut FrozeFruit Bar in the lobby concession stand. Pattern established. 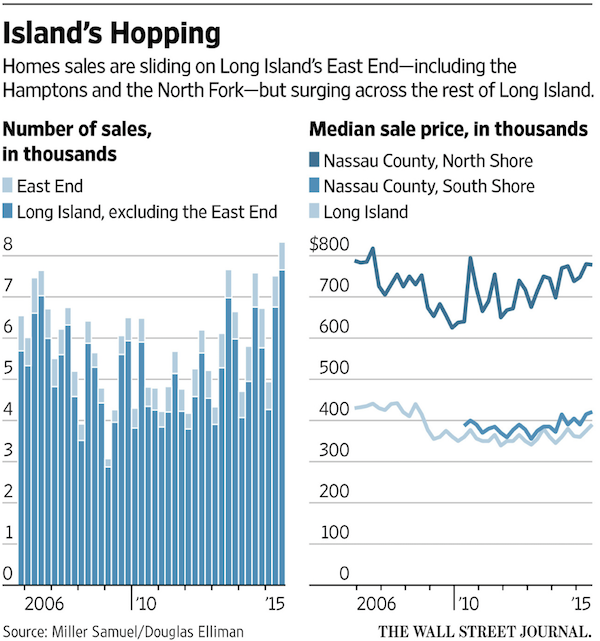 A number of the suburban housing markets, those without a large concentration of high end markets, saw heavy volume in the third quarter. As you can see in the above matrix tables for various housing markets, we observed: 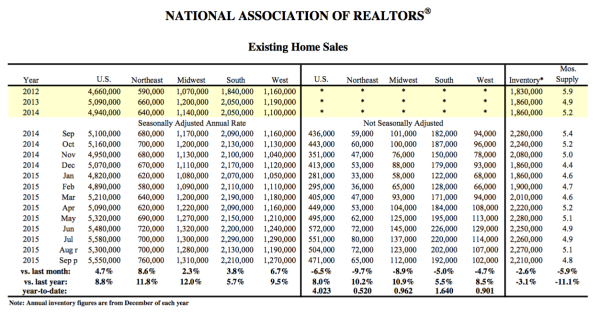 Financial engineering makes a comeback to help the middle class

Back in 2006, I was informally approached by three different parties bidding on Stuyvesant Town–Peter Cooper Village in Manhattan to talk about market conditions. These were very smart, rationale people, yet they were making insane assumptions about what could be done with the property and how much the apartments could rent for. Probably because I hadn’t taken a sip of the Kool-aid, I was never hired as a consultant for the initial deal. The U.S. housing market was peaking and frothy unsupported rationale to justify a high value back then was consistent with the systemic breakdown that led to the housing crash. The eventual winners of the bid were hailed as heroes for making largest U.S. sales transaction in history at $5.4 billion. On the day they closed however, they immediately hemorrhaged cash as the statutory rents could not be made high enough to cover the debt service. After they lost the property a few years later, I was brought in as a consultant by another group with a viable plan to acquire the project that would be best for the tenants, make the bondholders whole and provide equity to long term tenants who bought, but self-dealing and politics kept us out. This week’s new $5.3 billion deal was done by a consistently successful Wall Street firm who made the transaction happen in a short period of time. I am scratching my head wondering how thorough due diligence could be on such a massive project in a short period of time and how they will make money. But hey, I’m not smart enough to be on Wall Street. Sadly the current tenants won’t likely enjoy the upside of a co-op conversion for decades if ever, but there will be welcomed stability after nine years of chaos, and at least for the next 20 years a large portion of the units will remain affordable. Perhaps the secret sauce that made this deal fly was the announcement today that the buyer will be able to sell development rights to developers in other parts of the city.

Wow, I didn’t mean to go that heavy on you loyal Housing Note readers. One last observation. The cost of a Manhattan parking space is probably equivalent to a Manhattan cemetery plot. The last two plots in Manhattan are asking $350,000 each and assuming a slightly lower eventual purchase price and my 2007 study’s parking space conclusion of about $225,000, adjusted for inflation, are similar. And of course an analogy about long term parking seems to apply here, with or without donuts.