The U.S. Housing Market: Greatest Of All Time (GOAT)?

I’m no market bear but the chronic lack of supply and surging prices in the national context doesn’t match wage growth and can’t be sustainable – but more importantly this week I turned 60 and our appraisal company Miller Samuel turned 34 so there’s that. Plus we all need to take a time out and watch goats.

You didn’t know you needed 15-seconds of baby goats jumping-around today — but you did… pic.twitter.com/Z7Jp69q9qP

I have been the author of the expanding Elliman Report series since 1994 for real estate firm Douglas Elliman. We’ve recently added a new type of report to the series.

These monthly regional reports break out each market’s performance by eight price tranches on a year over year basis and are a supplement to our quarterly market report series.

Brooklyn
The new signed contract total of all three property types exceeded the prior-year level again but appeared to be plateauing. New listings continued to rise as sellers are looking to take advantage of the spring demand surge.

Long Island (excluding H/NF)
New signed contract activity for single family and condos continued to be significantly higher than year-ago levels, but growth appears to be plateauing. Some of the largest year over year gains in new signed contracts were occurring above the $300,000 threshold for single families and above the $400,000 threshold for condos.

Hamptons
Single family new signed contract totals rose sharply as they have been since the spring with nearly double the prior year’s activity. Condo new signed contracts also continued to see a significant year over year gain. New listings across both property types have been rising quickly in response to considerable demand.

Palm Beach County
Year over year, new signed contract gains for single family and condos continued to remain well above year-ago levels. New listings for both property types entering the market were up only slightly over the same period.

Broward County
Year over year, new signed contract gains for single family and condos continued to remain well above year-ago levels. The overall number of new listings for both property types entering the market remained similar over the same period.

Pinellas County
New signed contract gains for single family and condos continued to remain above year-ago levels. The overall number of new listings of both property types entering the market fell short of the prior year total.

Hillsborough County
Year over year, new signed contract gains for single family and condos remained slightly above year-ago levels. The overall number of new listings for both property types entering the market fell short of the prior year total.

Aspen
New signed contract gains of both property types were nearly double the prior-year level, significantly outpacing the increases in new listings. While the excess demand partly caused by the spring market shut down has been largely satiated, the market remains considerably more active than the year-ago period.

Snowmass Village
New signed contract gains of both property types were sharply higher than the prior-year level, significantly outpacing the number of new listings coming onto the market. While the excess demand partly caused by the spring market shut down has been partially satiated, the market remains significantly more active than the year-ago period.

The Manhattan market still remained the laggard in the region. Listing inventory continued to climb, but remains short of the record set in Q1-2009 and the second-highest level seen in Q2-2009. 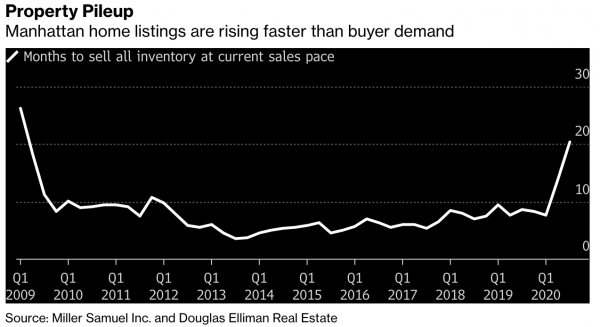 As you can see in the following screenshot of my spreadsheet, closed sales in the third quarter saw a larger year over year decline at lower price levels. This skew has been significant enough to cause top-line price trend indicators to rise year over year, yet MARKETWIDE PRICE TRENDS ARE NOT ACTUALLY RISING! The market has since pivoted as indicated by the New York New Signed Contract report presented earlier as the sub-$2 million market is showing more sales strength. 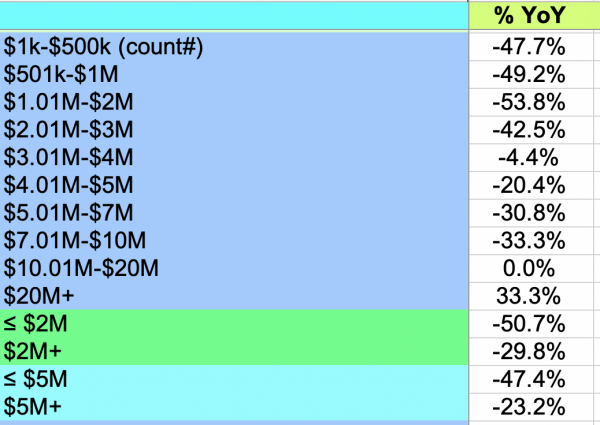 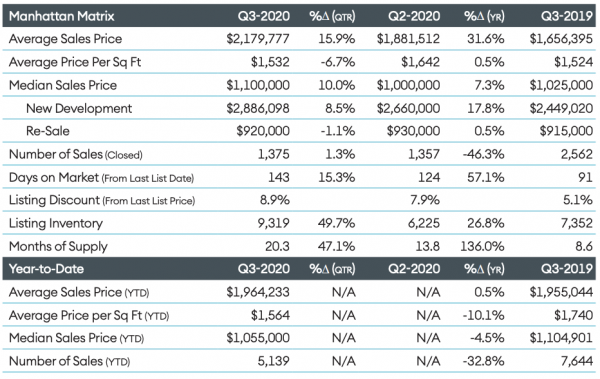 Co-ops & Condos
‘This quarterly report largely reflects sales contracts that were signed during and after the COVID lockdown that ended in late June.” 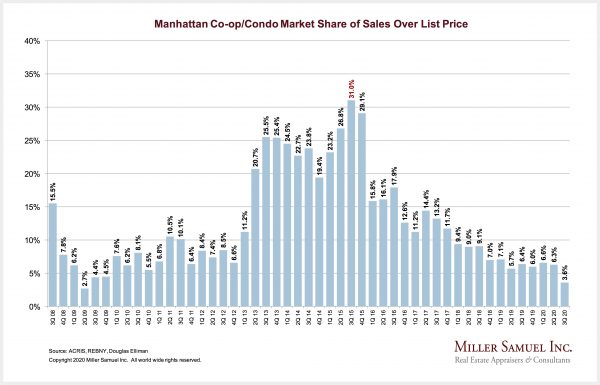 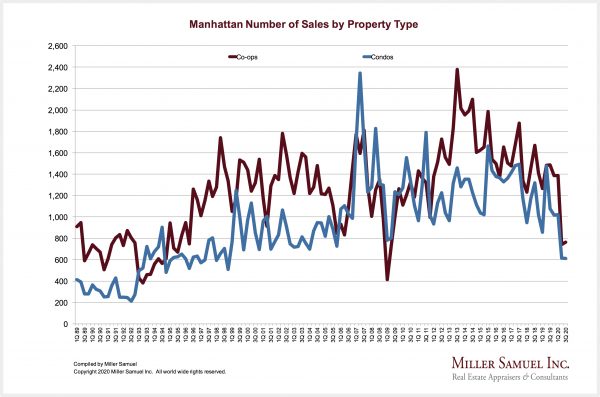 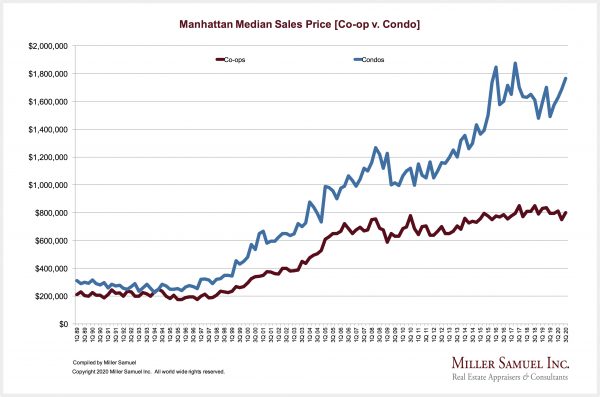 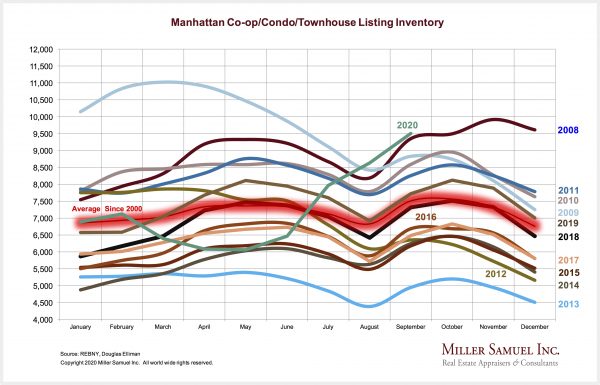 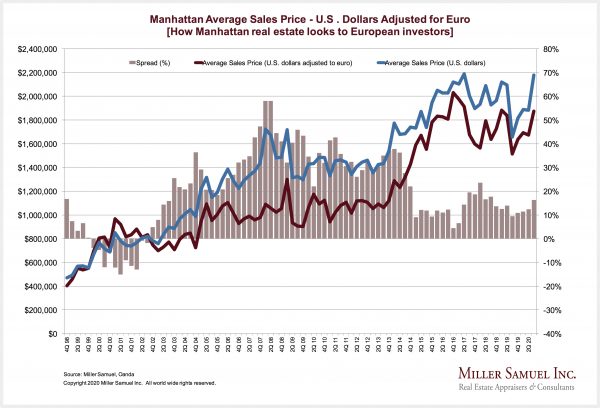 “The number of sales remained well below year-ago levels as the market climbed out of the spring lockdown.” 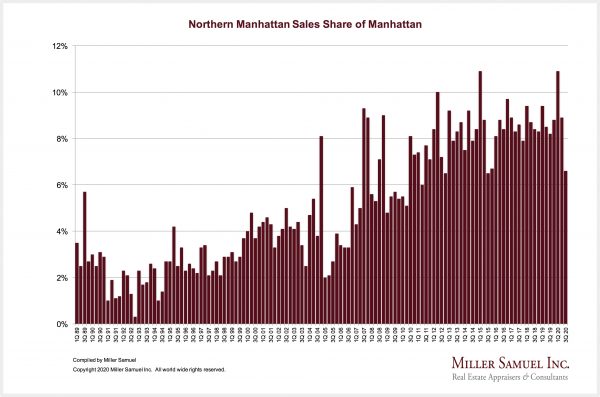 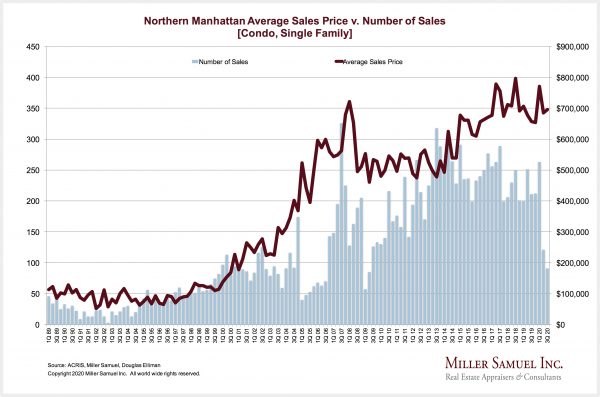 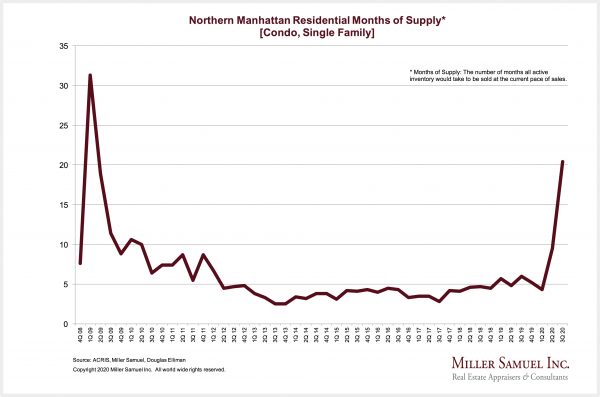 The website Visual Capitalist is a terrific place to seek out economic context. 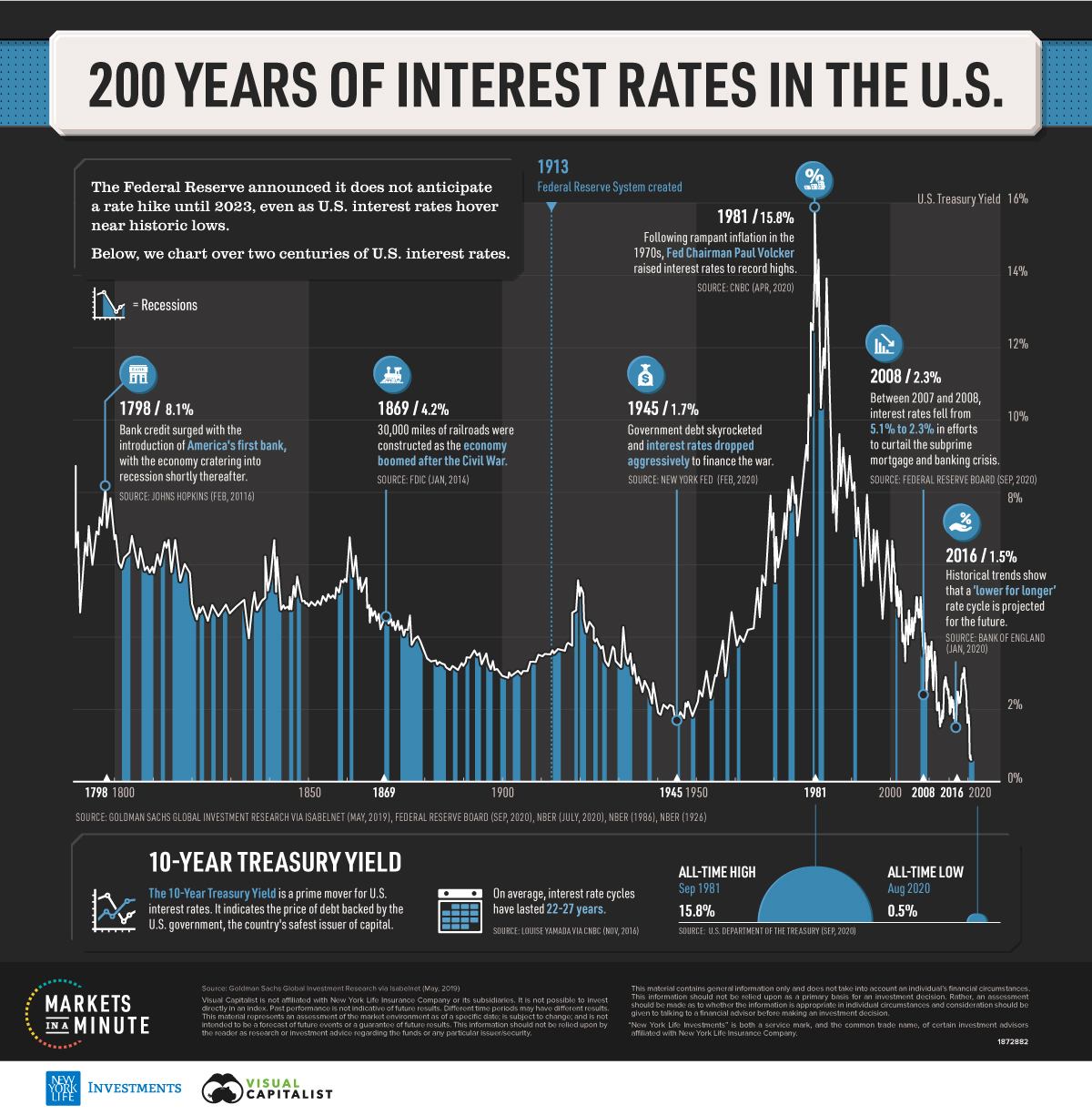 Downtown Josh Brown Is All In On The Housing Market

Josh Brown’s The Reformed Broker is a must-read web site. This prolific blogger and CNBC commentator has a lot of useful insights. Take a listen to this discussion on his podcast.

Lack of supply is where the greater concern is.

My favorite charts of the week 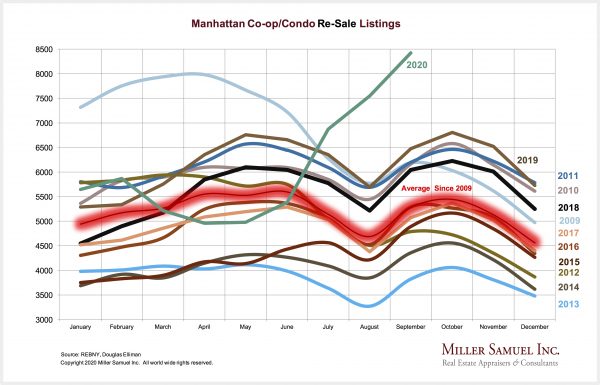 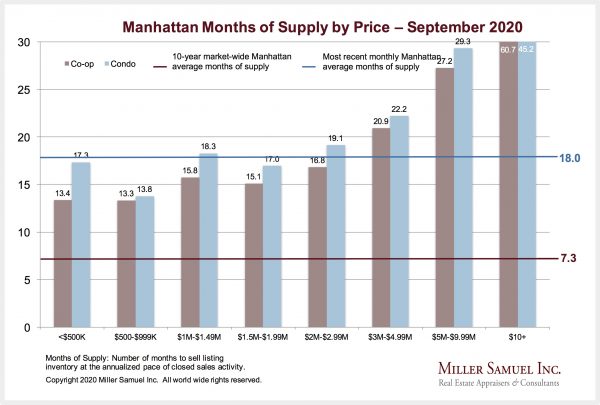 From my friend Mike Simonsen over at Altos Research…

Why we're unlikely to see a lot of foreclosures despite 4 million mortgages in forebearance.
Thread 1/5

US Active Inventory of single family homes for sale down to 568,000(!) down another 1% this week. pic.twitter.com/SkiK1uSIS2

Really looking forward to this one. You can register here or click on the image to go to the registration landing page. 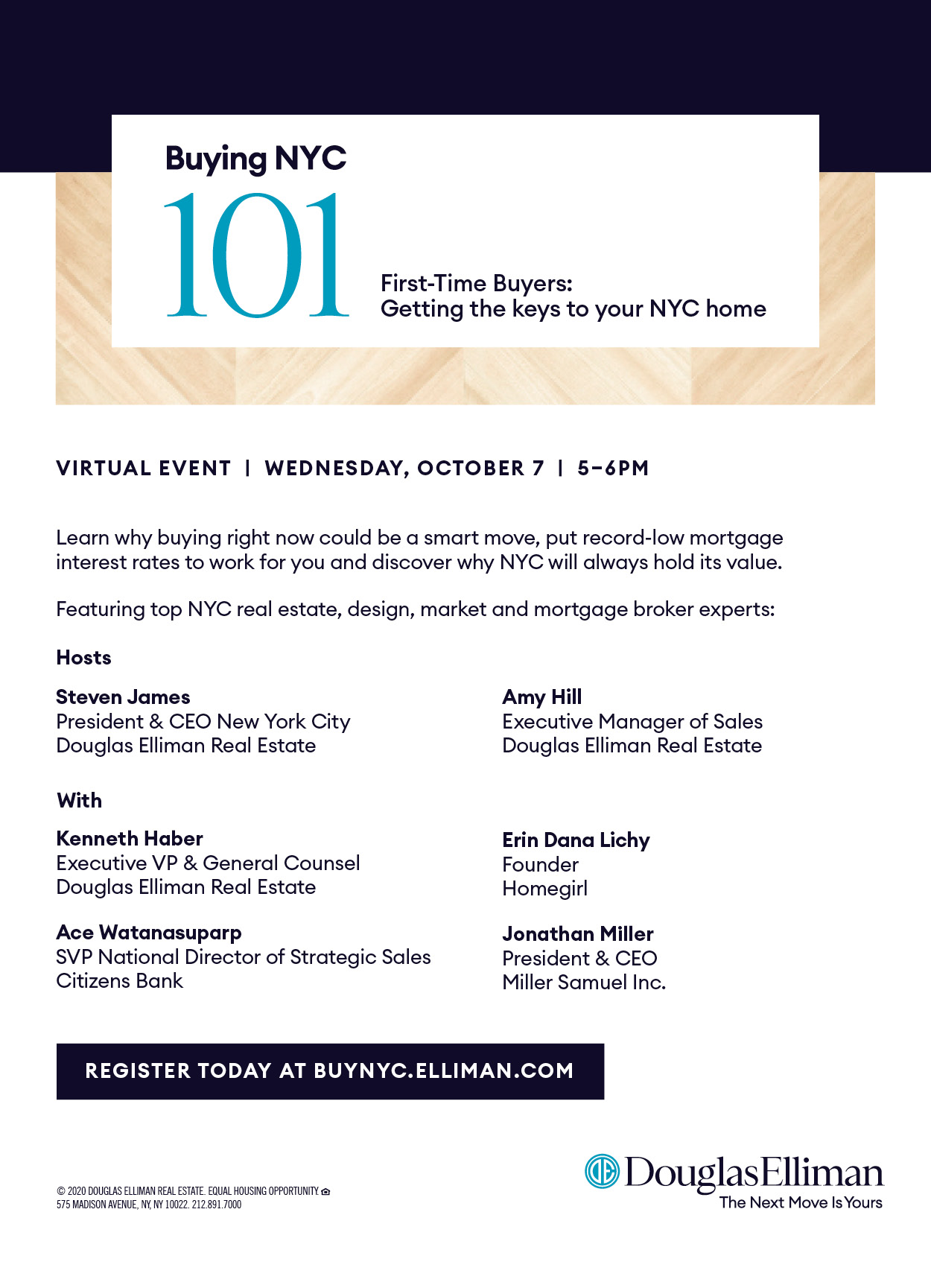 Slandering Appraisers: A Cincinnati Real Estate Broker May Be Both A Fool And A Tool 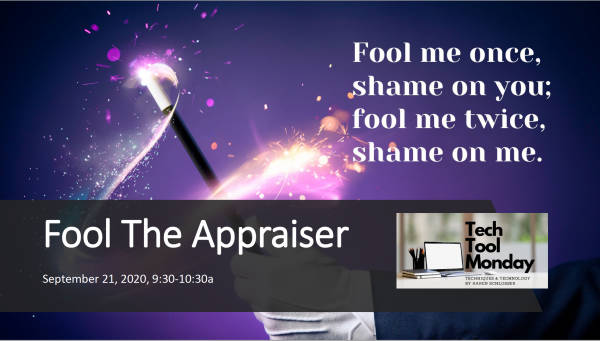 She recently promoted her video called “Fool The Appraiser” – a catchy marketing phrase to promote dishonesty. She literally has no idea how offensive this is to the appraisal industry and how unprofessional this makes her look to the public and her peers.

From the transcript of her video:

So, the purpose of the game is to fool the appraiser into thinking that the property is worth the agreed upon purchase price.

Standard of Practice 15-3
The obligation to refrain from making false or misleading statements about other real estate professionals, their businesses, and their business practices includes the duty to publish a clarification about or to remove statements made by others on electronic media the REALTOR® controls once the REALTOR® knows the statement is false or misleading. (Adopted 1/10, Amended 1/12)

Here is the webinar handout. Clueless.

Her lack of judgment and professionalism is stunning whether or not she is good at selling properties.

Everyone needs to lighten up every so often.