It’s been a busy, confusing but fully exposed week in housing.

We published 5 research pieces on the South Florida housing market (more on that later). We learned that naked and Playboy magazine were no longer one (but there is a housing angle to that, obviously) and some pretty good insights on basic math that will help us all deal with the hyperbole within the housing market.

First, we need to relax…

Loyal readers of Housing Notes have come to appreciate that reading this weekly column is a fully immersive experience. With that in mind I’ve provided a digitized in-store cassette tape Kmart soundtrack to be played while reading it. Lets call it a Blue Light Special for Housing Notes.

The 99-cents theory of pricing

There is a super cool New York Times column called “The Appraisal” which, all journalism considerations aside, is clearly the best named column in the history of journalism. It’s a bonus that the topics and writing is top notch.

Here was my 2012 scattergram which is one of my favorites of all time. 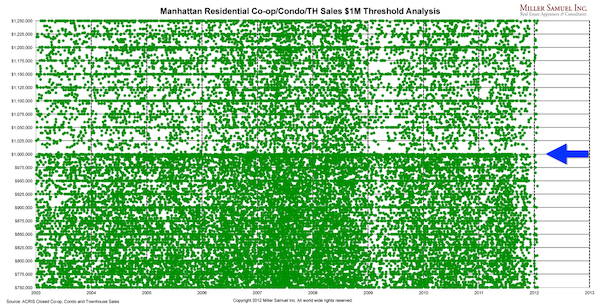 And with the data updated through 2015, here is the amazing chart used in the New York Times article. 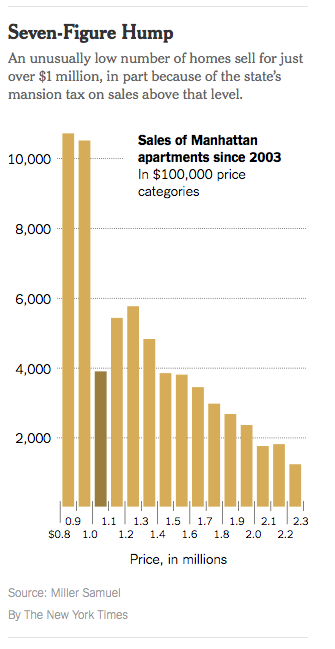 There is an invisible heavy hand at work, believes Jonathan J. Miller, the president of Miller Samuel, the appraisal firm that prepares Douglas Elliman’s market report. “The moral of the story is, tax policies are strong motivators to modify human behavior,” he said.

Then do the math…

My friend and prolific writer Barry Ritholtz writes a numbers tome “Don’t Be Blinded By Big, Scary Numbers” that is a must read for anyone that follows the housing market. So much of the numbers we see presented are wildly out of context all because we are being fed the numerator and not the denominator.

Median sales price has become the semi-official price metric over the years because it removes the extreme highs and lows and sees less skew than averages. I present both and more in my housing research because their relationships tell the story as well. No metric is good on its own. Here’s a quick Business Insider piece the difference between averages and medians (don’t worry, no one will know you had to brush up on them).

A hedge against inflation or insanity?

In 1986, the year we founded our appraisal firm Miller Samuel, there was an article on the first time a sale exceeded $1 million (h/t Kim Velsey on twitter) in the New York Times.

The first sale of a Manhattan apartment for more than $1 million is believed to have occurred in 1978. It was a 15-room apartment at 834 Fifth Avenue…

I’ve been beating the drum since 2008 about tight credit conditions and the havoc it has played in housing patterns. Here is one of the best visuals of this phenomenon I’ve ever seen. 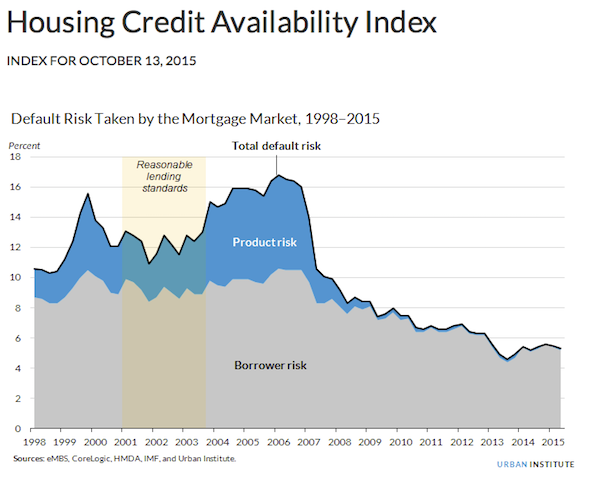 Portland, Oregon and Austin, Texas (do I really need to include the states?) have been good at it keeping it weird. To keep it “weird”, the idea is to keep change constant and that will actually help a city maintain its character.

When we first moved to Manhattan in 1985 from a three year stay in Chicago, we soon moved to the Upper West Side and I found an amazing place to hang out: Tower Records. In between appraisal assignments and on days off, I’d roam the aisles of Tower Records on the Upper West Side and downtown. It was a cool place but I didn’t fully appreciate why it was so special. A new documentary is out on the rise and fall of the Tower Records – here is the trailer All things must pass that explains why.

But constant change as through diversification can be difficult for current residents. A few years ago I coined (if you want to call it that) “Queens is the new Brooklyn” as a way to describe home buyers being priced out of Brooklyn’s rapidly rising real estate market. Recently I started saying that “The Bronx is the new Queens” only because prices are now rising in Queens to a point that is beginning to push new development to the Bronx. Here’s a good photo essay on current Bronx residents.

Another one of my favorite reads this week (and speaking of “naked”) and is required reading for all of my loyal readers who are New York residents. And if you are not a resident, read it anyway since it applies to everyone. It’s terrific piece by Adam Gopnik called “Naked Cities – The death and life of urban America.” The opening paragraph is incredible:

Cities can’t win. When they do well, people resent them as citadels of inequality; when they do badly, they are cesspools of hopelessness. In the seventies and eighties, the seemingly permanent urban crisis became the verdict that American civilization had passed on itself. Forty years later, cities mostly thrive, crime has been in vertiginous decline, the young cluster together in old neighborhoods, drinking more espresso per capita in Seattle than in Naples, while in San Francisco the demand for inner-city housing is so keen that one-bedroom apartments become scenes of civic conflict—and so big cities turn into hateful centers of self-absorbed privilege. We oscillate between “Taxi Driver” and “The Bonfire of the Vanities” without arriving at a stable picture of something in between.

Speaking of weird, I’ve long been called a “geek (or nerd)” but of course I always correct them by saying “no, I’m a cool geek” and I own it. Of course the person that first said that to me as an attempted, but failed, dig lost their appraisal license and went out of business. Never mess with a geek as Stephen Colbert has proved.

Of course the profession of real estate appraisers, is in trouble.

The Real Deal provides a good overview of the South Florida market. Here’s the super luxury take – a $60 million sales price in Miami. My friend Senada Adzem of Douglas Elliman provides a clear description of the super luxury market and it’s linkage to Manhattan real estate.

Here are the 3Q 2015 reports just published that I author on 5 South Florida housing markets for Douglas Elliman Real Estate. I’ve been writing this expanding housing market series for more than 21 years (cough). 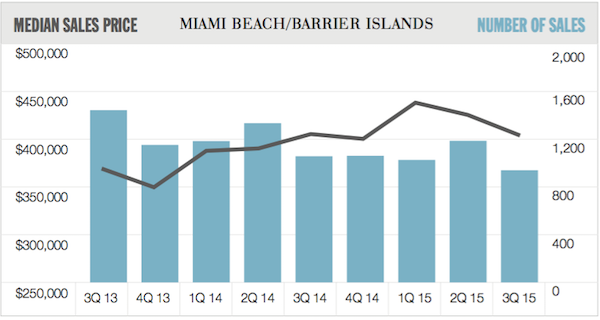 Overall Miami Beach housing prices were mixed as sales fell short of year ago levels and inventory expanded. Median sales price was $403,500, down a nominal 0.4% from a year ago. Average sales price increased 5.4% to $919,284 over the same period. Within the condo market, all price indicators moved higher while the single family market reflected mixed results. Overall sales slipped 11.1% to 940 from the year ago quarter as both property types fell short of year ago levels… 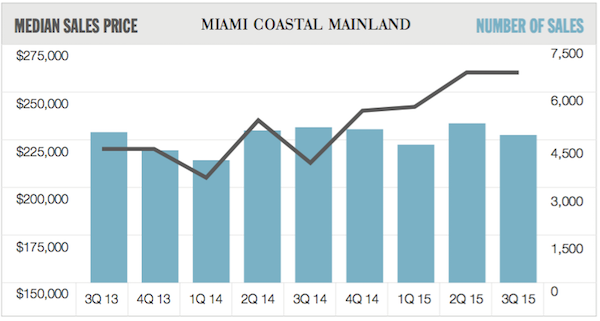 Median sales price for Miami’s coastal mainland surged as sales slipped due to the sharp decline in distressed sales. Condo median sales price increased 2.2% to $217,400 and single family median sales price rose 10% to $302,500 respectively from the same quarter a year ago. The luxury market, defined as the top percent of all sales in the quarter, showed weaker price trends…

That’s it for now. If I was anymore transparent, I’d be arrested for public nudity.