There are many memes with the following voiceover and it says everything about the joy I feel on this anniversary:

I can’t believe how quickly three and a half decades have passed but our appraisal and consulting firm turned 35 today. We’ve come a long way from October 1, 1986, when we worked out of our three apartments (2-one bedrooms and a studio) in Manhattan, sharing information between us all day long via fax machine, and writing programs ourselves to generate appraisal reports on Macintosh computers. There was no email back then and those dot matrix printers were LOUD. We spent a large amount of money on printing color photos from negatives and running them through an adhesive wax machine to then roll them onto the paper report.

But we had an idea of providing high-quality appraisals to a market where more than 80% of the residential sales were NOT in public record and there was no MLS.

The mission today is the same but we’re bigger and we use email and have an office. LOL. I’ve been in about 8,000 Manhattan properties over this period and can actually remember most of them (which is a weird skill I have). Thanks to the thousands that have used our services and we look forward to the next 30 years.

Zelman Isn’t Thrilled About The Future Of The U.S. Housing Market

My good friend Ivy Zelman is making a contrarian call about the outlook for the housing market that is about as contrarian as you can get. She and her partner Dennis McGill at Zelman & Associates have some significant research to back it up. Incidentally, the only thing I have in common with Jim Cramer is that we went to the same dentist years ago.

‘Only Murders in the Building’ Has A Real Estate Angle, Obviously 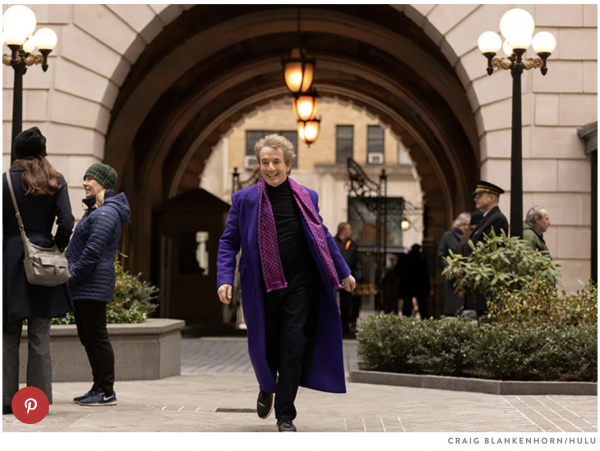 Like the show Sex In The City, the new Hulu series ‘Only Murders in the Building’ has people interested in what the value of their apartments are. The show takes place at the current rental to condo conversion in the full block pre-war building, The Belnord, located on the Upper West Side. You can buy floorplans of Sex In The City apartments so I expect this will be inevitable for ‘Only Murders in the Building.’

This is a great Bloomberg piece on how the NYC comeback is taking shape. 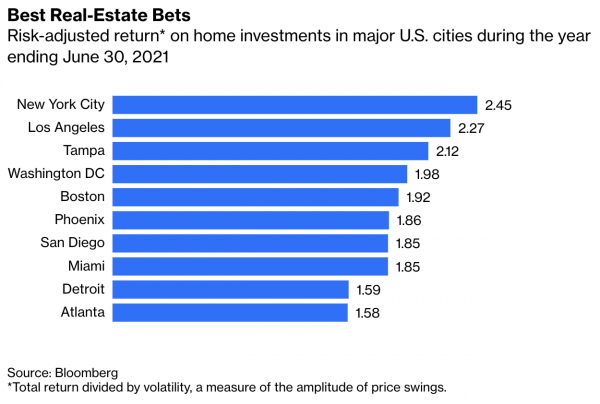 The New York City home has not only appreciated strongly, it has done so with the narrowest price fluctuations among 20 major U.S. cities. That means New York homes provided the greatest risk-adjusted return during the past 12 months ended June 30, according to data compiled by Bloomberg.

The article goes on to say that the same thing happened after 9/11 – in the ensuing decade, home prices rose more than four times the national growth rate.

Its some sort of kismet, the city rallies after a catastrophe to be better than before and those events seem to occur once a decade.

Yet Weekly Manhattan Contract Reports Only Reflect The Top 10% Of The Market?

Every week, real estate broker Donna Olshan releases their contract report and it gets a lot of press coverage. She has championed this research for years and she deserves all the hard-won credit she receives for the reports.

Week in and week out the numbers go up and down but lately more up than down.

I find it fascinating that so many news outlets are interested in weekly housing stats since that’s a real estate liquidity logic we got wrong during the financial crisis. Then again the fascination is largely because they are starving for any news at all on the housing market because New Yorkers can’t get enough of it. I know the report says “luxury” but it seems to be read as the entire market, probably because it is covered every week. After all, real estate is the backyard BBQ conversation in this market. It’s a total obsession that has been around for more than a century.

But since Olshan data only reflects the top 8-10% of the market (listings north of $4M), assuming they all close, it somehow morphed into a proxy for the state of the entire market. This disconnect in the report results is the part I find interesting since the performance of the market has largely inverted after the end of the pandemic lockdown. I’m just not comfortable with the idea that the high end of the market is a proxy for the entire market because it isn’t. Imagine if someone released a report that covers the market only between $1 million and $1.5 million, would readers feel the same way? Probably not. I suspect it’s more about the aspirational pricing aspect of Manhattan real estate.

The post-lockdown market in Manhattan started slow, but by late fall into early spring of 2021 the market woke up, largely in the mid to upper end by price strata because pandemic-related economic damage was directed at lower wage earners. Yet before the pandemic, the market was “soft at the top” especially from early 2018 through the end of 2019. So a contract report that follows the top 10% of the market to those that viewed it as a proxy for the market would understate overall market performance during that period.

There is really an interesting disconnect between what Manhattan sub-market the report actually represents and how it is used as a way to describe the entire market. Weekly data volatility doesn’t give us trends that can be related to by the reader. 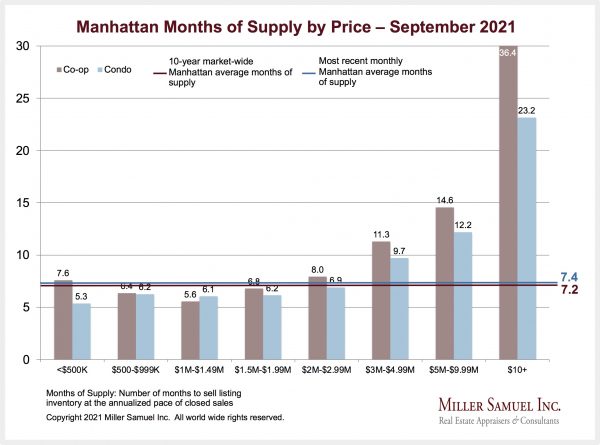 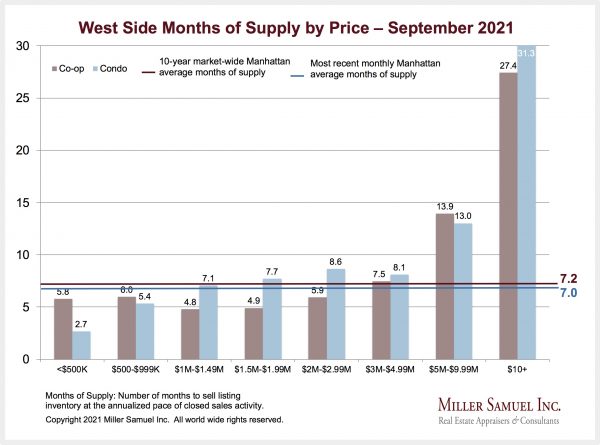 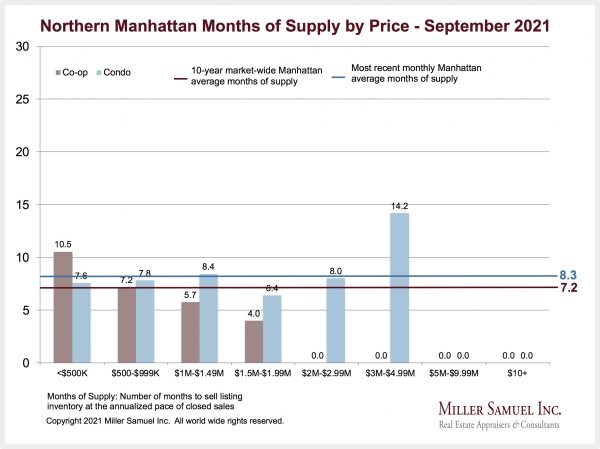 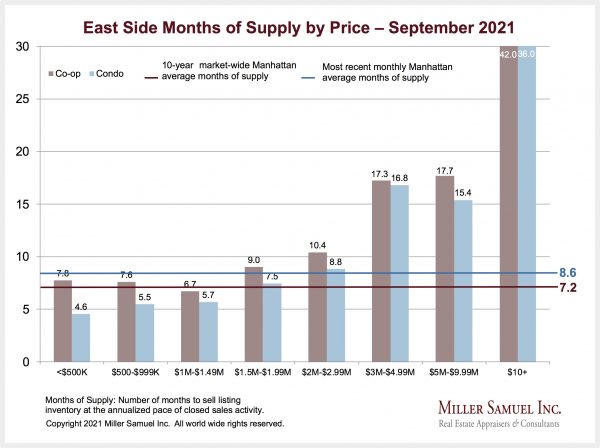 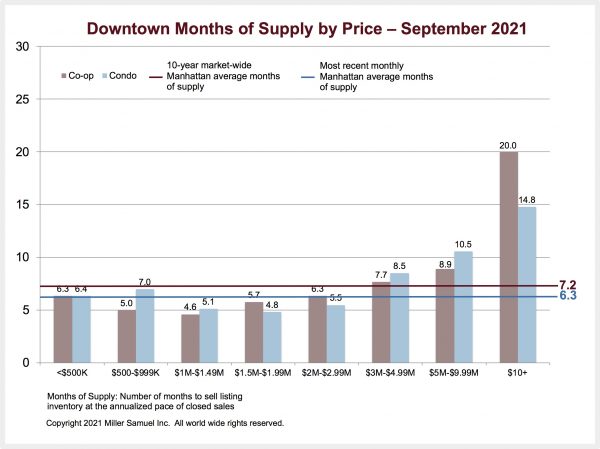 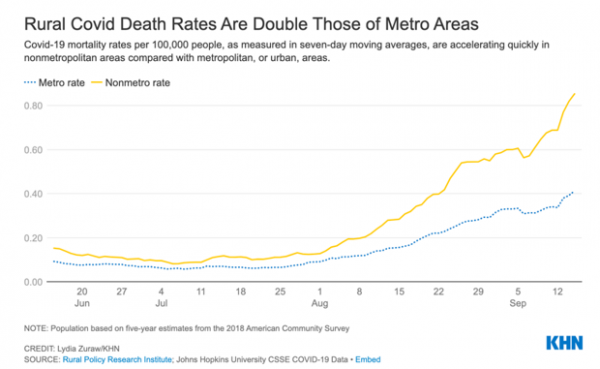 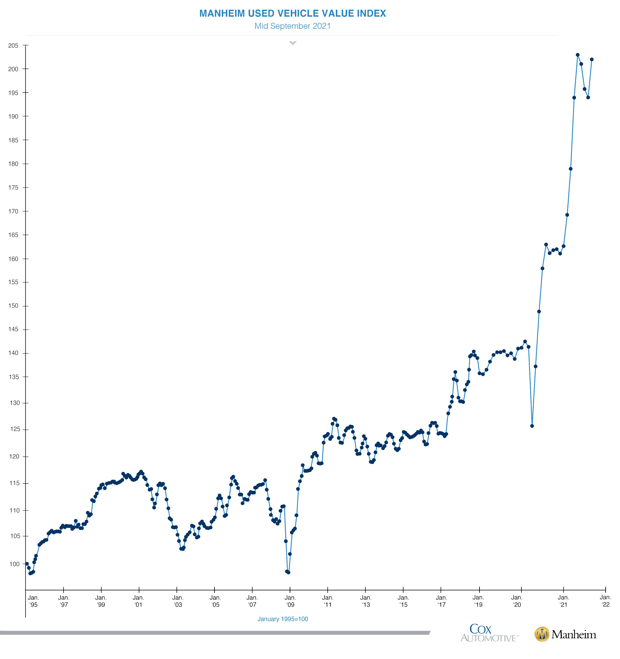 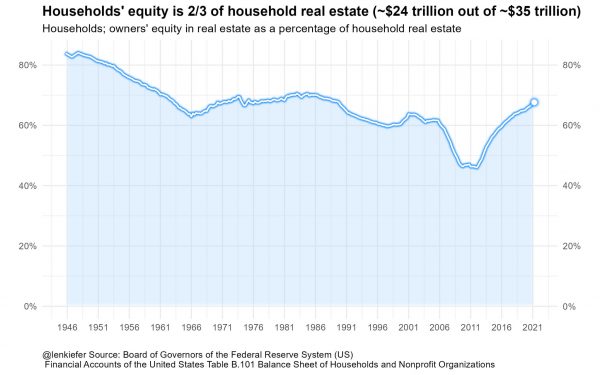 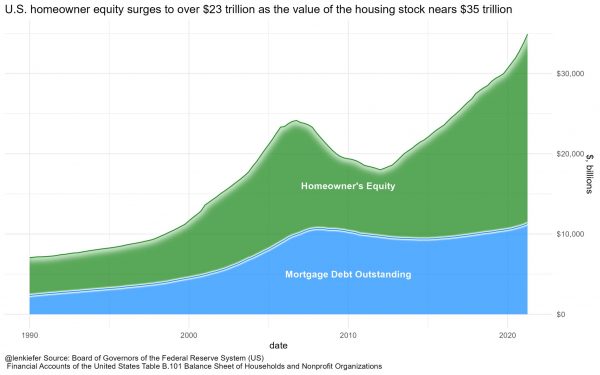 TAF Continues To Make It Incredibly Complicated For Appraisers To Get Licenses, All Just To Make A Buck

From the people that brought you no diversity in the appraisal profession and their famous bat-shit crazy letter, are now launching a new 7-Hour National USPAP Update Course.

Apparently, TAF is “updating” their course (I think). What are they updating? Did USPAP change? I thought a new version of USPAP was on hold ‘because of COVID?’

Why does licensing have to be so wildly complicated in an industry where valuation principles and practice change like the continental drift? I’ll bet 98% of people that read the newsletter can’t explain what this ‘updated’ course addresses that haven’t already been addressed for decades, but 100% will assume it is going to cost them more money for the materials. 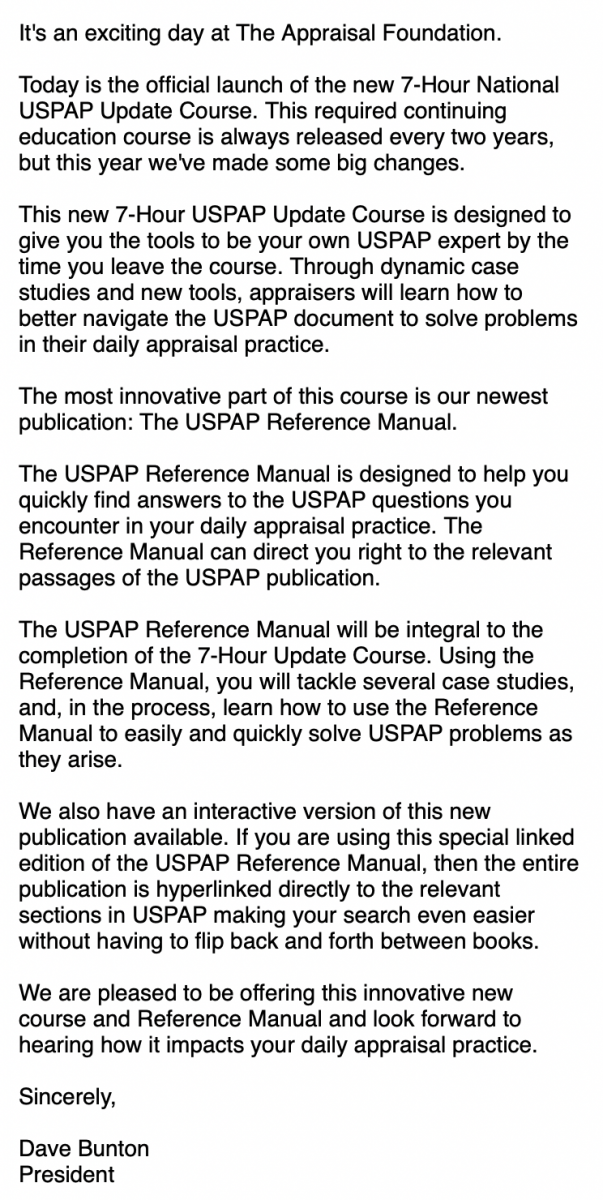 Dave always keeps appraisers up to date on the nooks & crannies of our profession – I filled out the survey:

FNMA has put out a short survey questioning appraisers on racial bias and asking what FNMA can do to eliminate this perceived problem. Find the survey here, at this link:

I spent 5-8 minutes with it. Frankly, some of the questions are very poorly conceived and written, and in one case, a wrong word is used in their question.

But I would encourage appraisers to do the survey. Maybe FNMA can glean something of value out of this.

The news out of South Dakota came fast and furious with a breaking story by the AP. I received lots of notes from appraisal colleagues when the AP story broke: South Dakota AG reviewing Noem’s meeting with daughter:

The Associated Press reported Monday that Noem held the meeting shortly after the state agency had moved to deny her daughter the license last year. Noem’s daughter eventually received her license four months later. Afterward, the state employee who directed the agency was allegedly pressured to retire by Noem’s cabinet secretary. The state employee, Sherry Bren, eventually received a $200,000 payment from the state to withdraw the complaint and leave her job.

The basic story here is that the governor’s daughter, after being given multiple opportunities to apply for her appraisal certification, was rejected by the state and would have had to wait 6 months to reapply again. The governor held a meeting with the state employee that rejected her daughter’s application, lawyers, the head of the state department of labor on the same day which sounds quite intimidating. The state employee and the entire licensing group knew the applicant was the governor’s daughter and yet still felt strongly enough to reject the application.

Now the SD AG is investigating the governor’s role in this after a year of being besieged by public statements and actions by the governor to get rid of him after he ran over a pedestrian and left the scene. He claimed he thought he hit a deer and then came back to the scene in the morning.

Lengthy payback against the governor is expected so I don’t think this situation is going to go away.

Incidentally, the state employee did not want to leave her position but the state labor secretary, presumably under orders from the governor, forced her out.

The irony here is that the head of the state department of labor, who is in charge of overseeing fair employment laws, forgot her primary responsibility and discriminated against an employee by firing her for political expediency.

Incidentally, the loss of this employee is quite detrimental to appraisers everywhere. She had just got the Share Experience Training program adopted by the state legislature and funded by the Appraisal Subcommittee in the grant amount $360,000 over the next three years to accelerate entry into the profession.

The atypical behavior that the governor’s daughter benefited from was based on the idea of “Agreed Disposition” so that when an appraiser fails a test or doesn’t submit adequate examples of their work, the appraisers agree that in order to remedy this, they have another chance to pass but those occurrences are placed in the public record. This enables the state a path to get them licensed eventually without immediately failing them. Those failures are all publicly disclosed. However, in this case, all those records suddenly became hidden from public view. The reporters that broke the story were unable to get them, unlike other appraisers that went through “Agreed Disposition.”

More to come on this topic.

A post shared by Alex – that girl with the cars (@supercarblondie)