Housing’s Two For One (COVID + Migration)

This kid hit a pitch AND a foul-ball from another field at exactly the same time.

I wanted to give my shoutout to my excellent Columbia Grad students who participated in this week’s Zoom lecture on the nuances of market analysis. Here’s that same tip: you don’t need to concern yourself with the “Appraiserville” section down below where I bring transparency to the appraisal industry, especially with the larger institutions that influence it. But by all means, feel free to read at your leisure.

New Signed Contracts Are Up YOY in NYC Metro, Florida, SoCal and Aspen

This week Douglas Elliman Real Estate published our monthly research for our new Signed Contract Reports. I’ve been the author of a growing Elliman Report series since 1994.

Not only are new signed contracts up year over year across the U.S., but we are also seeing noticeable gains in Manhattan, the long time laggard. In many of the markets, condos are starting to see the growth that single families have enjoyed since lockdown conditions ended across these regions. The initial pattern following the lockdown has been towards safety at the expense of condo activity. However, that emphasis on single families is beginning to wane nationwide

But before we get to that, the story that covered the New York New Signed contracts report results was the 10th most emailed by the 350K Bloomberg Terminal subscribers nationwide, edging out the election results. Wall Streeters love their real estate! 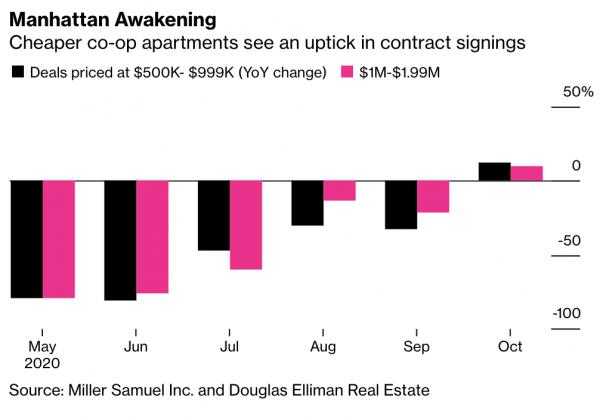 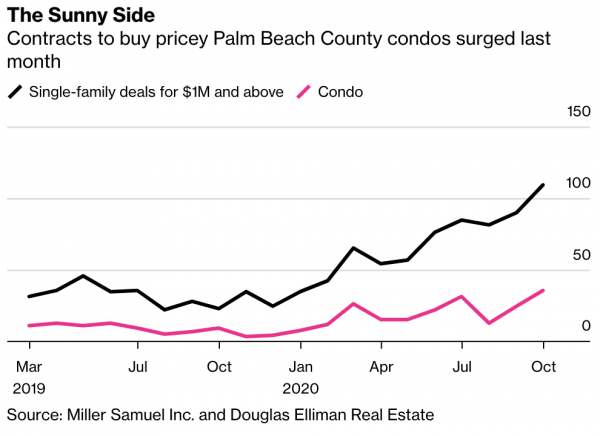 Aspen
New signed contract gains of both property types were roughly triple those of the same period last year. New listing inventory continued to remain above prior-year levels but was significantly outpaced by the growth in new signed contracts.

JPMorgan Will Now Only Finance 70% Jumbo LTVs in Manhattan

This headline is not great news for the Manhattan sales market where the median sales price was $1.2M in Q3 2020 and GSE conforming loan limits for Manhattan (New York County) are $765,600. As a result, mortgage activity is heavily weighted to jumbo which is anything but conforming. I have been impressed that financial institutions have been pretty good at managing their risk during this uncertain economic period. It doesn’t look like we are poised for a banking crisis as the economy slows down with the third wave of COVID making its way across the U.S. But my fingers remain crossed just in case.

“Every single lender is ratcheting up their risk requirements,” said Orest Tomaselli, chief executive officer of National Condo Advisors, which helps developers of new apartments comply with lender rules. “Right now, if you look out 24 months, can you say what the value of a new construction condo unit would be in Manhattan?

It’s hard to process the extensive effort this took versus the quality of the seemingly mediocre building that was saved.

REBNY Webinar: Don’t Get Spooked by the Market: Top Brokers Share Their Tricks

I participated in a recent REBNY webinar – I really enjoyed the broker feedback shared in this discussion. Pragmatic and insightful. To be clear, I didn’t “trick” anyone for Halloween – I just brought data candy…

Here’s Proof That People Nationwide Are Viewing Listings In Person

The U.S. firm “Showing Time” got a shout-out in the NYT Real Estate Section this weekend with the results of home showings before, during and after the COVID lockdown. I gave the keynote address for ShowingTime in Chicago for their first national event. I’ve been fascinated with their data as a forward-looking indicator and here we are four years later and they seem ubiquitous, showing up on seemingly every MLS system I have access to nationwide.

So yes, people are viewing properties like mad, with showings particularly heavy beginning in May when some lockdowns began to end.

We are seeing condo sales improve year over year in our new signed contract reports series discussed earlier, but Manhattan condos still lag the prior year and South Florida condo contractors are rising. The Real Deal presented an interesting piece using our results from our quarterly and monthly Elliman Reports. 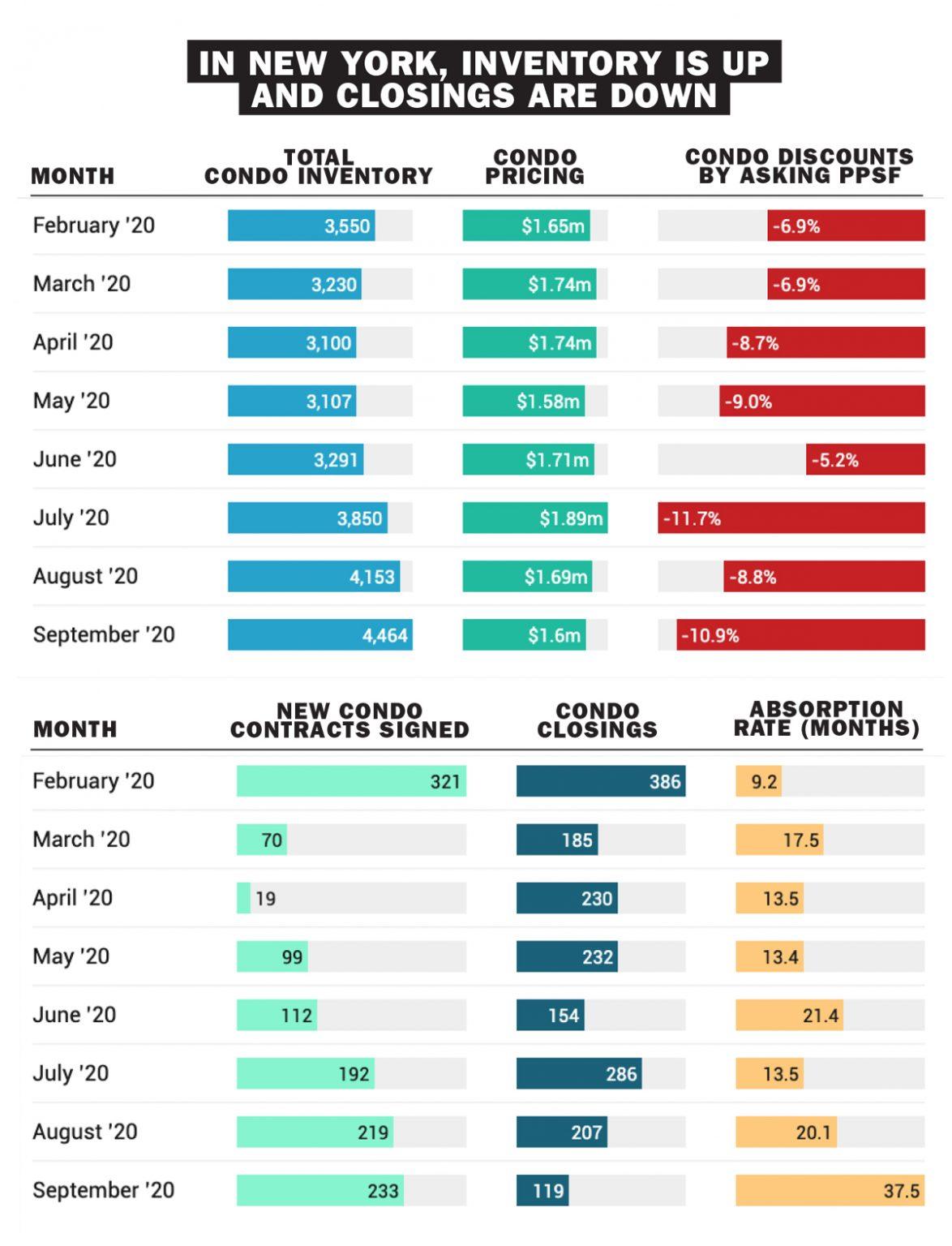 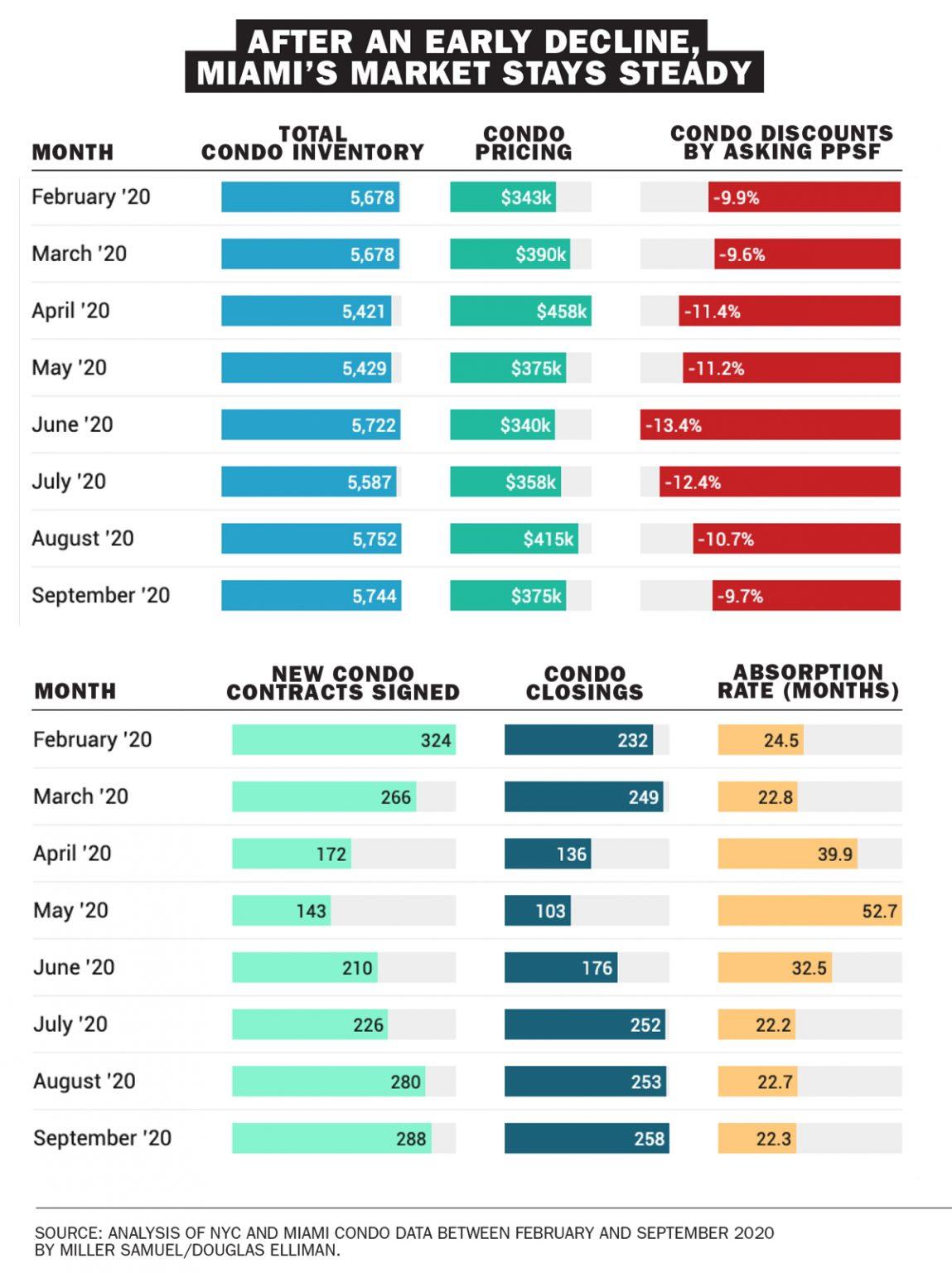 Miami, Florida, in about 1908: pic.twitter.com/DOmYa5vo6M

I Can See It Now: “Standards I – Sponsored By Zillow”

Yesterday I received this feedback from TAF/IAC:

The voting process was completed for Zillow Group and they were approved as an IAC member with the required affirmative votes (two-thirds of the IAC members). Thank you for taking the time to vote.

My appraisal firm is a member of the Industry Advisory Council (IAC) of the Appraisal Foundation (TAF). I’ve presented to IAC in Washington and the people I’ve met at IAC are great. Before I get to Zillow, here are my thoughts about the structure of the TAF councils:

IAC = Pay to Play In order to see how the sausage is made, members pay $2,500 per year to buy access to TAF executives, board chairs, and various staff. Members pay their way to the IAC meetings across the county, probably spending $10k to $15K annually. I only attended the meetings when they were in DC but each of those trips cost me about $1,500 round trip. I am not making the argument here that these companies shouldn’t have access to TAF, but it shouldn’t be on a pay to play basis. It is corporate elitism at its worst.

TAFAC = free The other council is for private organizations, trade groups, individuals, and government agencies. There is no fee for these members, just travel costs. More importantly, TAFAC has wasted more than a decade with the bitter feud between Dave Bunton and the Appraisal Institute. But now, as Kelly Davids has said, AI and TAF are going to make beautiful music together?

I have mixed feelings about the set up of these two councils. How can a publicly accountable organization like TAF, require a fee from the private sector? Is ‘pay to play’ really appropriate for a non-profit that has government oversight?

In addition, the IAC is comprised of many AMCs, National mortgage companies because they can afford the costs. My firm’s membership appears to be an outlier in that regard.

Let’s Look At Zillow as a new IAC member

As an IAC member, I voted against Zillow becoming a member. Full disclosure: I was a member (and the sole appraiser) of the Trulia Industry Advisory Council before the Trulia website went live and left after Zillow purchased Trulia – The Trulia co-founders told me I was the only member that remained from the startup to buyout process.

Zillow got its start with its Zestimate tool, a consumer-based AVM, known for its wild inaccuracies. They claim a 5% median accuracy rate. To the informed, this means that the Zestimate is accurate within 5% of the actual value 50% of the time, but 50% of the time it is not. In other words, a Zillow association with TAF significantly dilutes the public trust in the appraisal industry – violating their public mandate.

There were no listings on Zillow when it started. I remembered the constant drumbeat of Zillow trying to have great relationships with the brokerage firms so they could get their listing feeds. Now Zillow is going into brokerage, betraying their years of denial as a potential competitor.

I remember the evening before Zillow launched, I was introduced to co-founder Rich Barton at a NYC party sponsored by Inman/Curbed by the founder of Curbed, Lockhart Steele. I asked Rich, who was very nice, “so what’ya do?” To which he told me he was the co-founder of Expedia (and had I heard of it) and was launching a real estate platform called “Zillow” the next day. He said the name “rhymes with pillow.”

From the start, Zillow made appraisers and brokers’ lives miserable as it was very inaccurate but grabbed the consumers’ attention to become a juggernaut. Accuracy improved over the years but it’s still at the mercy of the quality of the public record.

My friend and colleague Ryan Lundquist wrote a great post a few years ago on what a number of myself and my peers have also discovered. The Zillow algorithms now seem incredibly weighted to the list price. 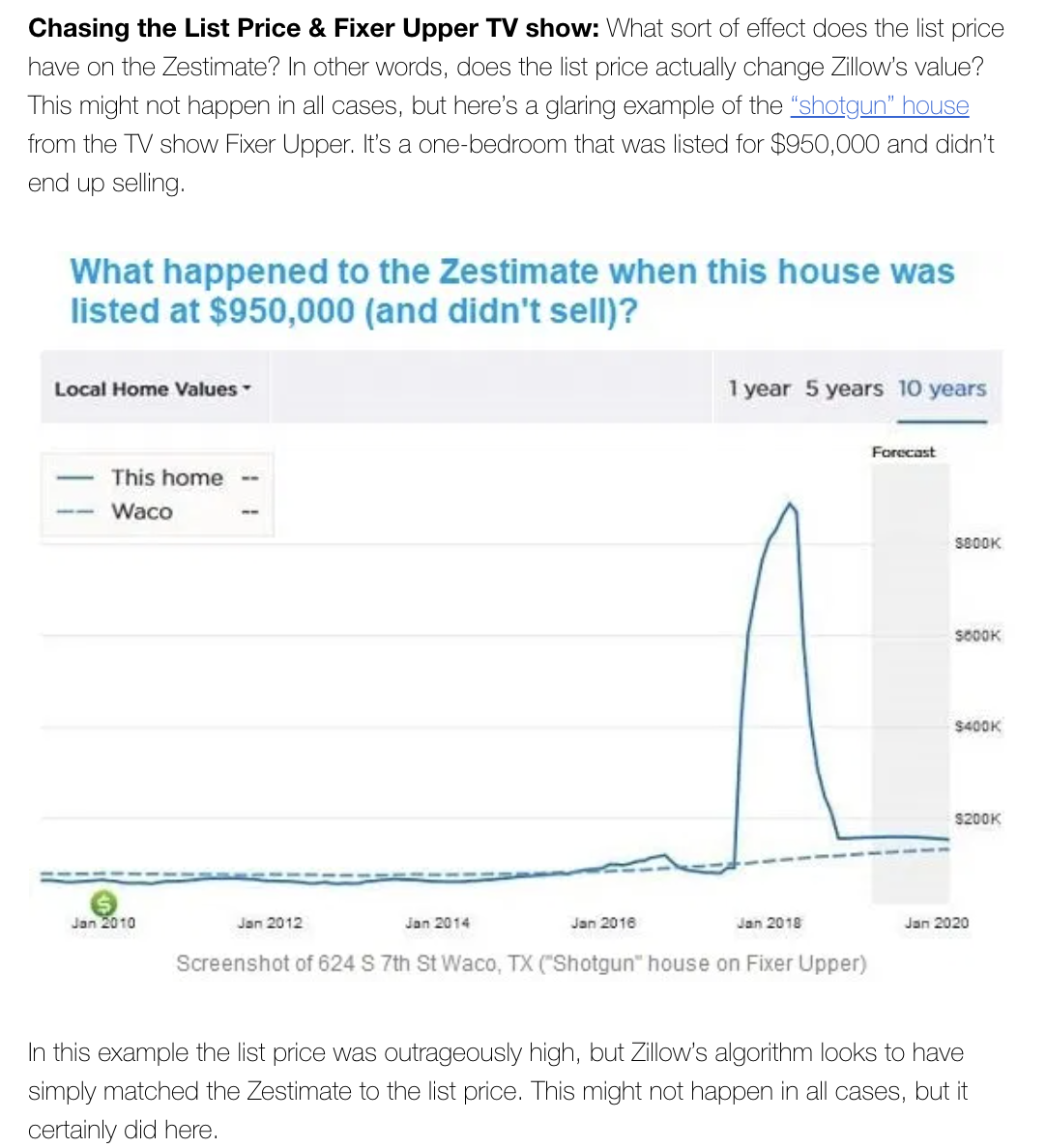 I remember getting a visit from then Zillow President Lloyd Frink years ago at my office, also a very nice guy. I was very candid about Zestimates and walked through of the problems with the Zestimates. One problem in particular was my biggest pet peeve. Zestimates are rendered to the nearest dollar, which infers a precision that doesn’t exist. Again, protecting the public trust doesn’t seem to be a concern of theirs.

Here are some additional thoughts on Zillow’s IAC membership:

And the most important consideration for IAC’s mistake in judgment is that because Dave Bunton is steering TAF away from accepting ASC grant money as Congress intended, they will become much more dependent on funds from other sources such as IAC members and Corporate sponsorships, continuing to shift away from their mission.

The Zillow decision and TAF’s actions are completely inappropriate for an organization that is supposed to protect the public trust.

As Promised, TAF Makes Standards 1-4 Available (But Hard To Find) In The Public Domain

As Dave Bunton, President of TAF promised to make USPAP standards 1-4 available to the public in an easy to use format. He did this after being told by their legal team, their position wasn’t defendable since public money was behind the establishment of those standards. Interestingly, TAF isn’t accepting ASC grant money now because they no longer want to be subject to oversight as presented in TAF’s “bat-shit crazy” letter to ASC. This sure seems like a non-profit created by Congress is not acting appropriately (going in the right direction). 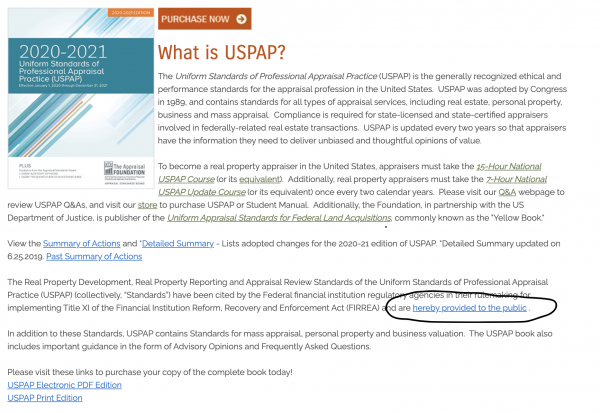 Your moment of chart zen:

Another gem from the endless list of wonderful little data jokes that people email, message or tag me in. pic.twitter.com/EuCbDMJQLm