I think it’s fair to say that most humans are driven to be accurate when it suits them. Forget daylight savings time and how we turned our clocks back last weekend as well as the usual discussions about why we should or shouldn’t go through this twice a year.  Let’s even skip leap year and get down to business with something more important, the leap second and the relationship to the Earth’s rotation. Even that methodology is now being argued by many people (especially the tidy-minded types who run national standards organisations) dislike the leap seconds’ hackish nature. 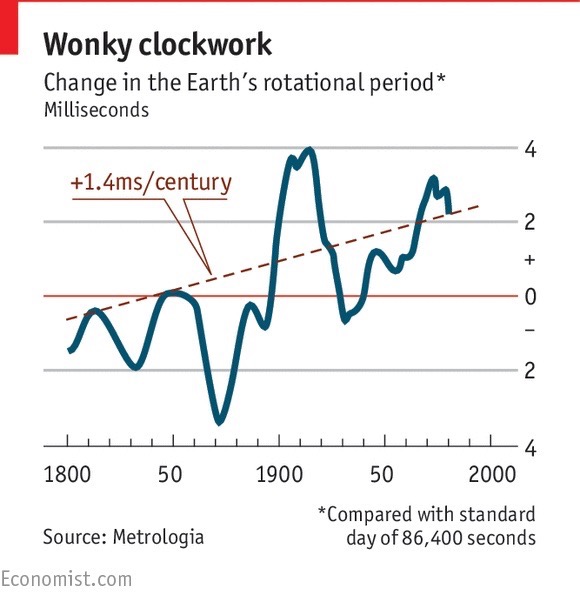 Now look at the precision expected in real estate values and trends.

If you confidently answered “no” to all of the above, then you have the ability to process proper context in your real estate life – just make sure your watch is adjusted for the time change.

There was no precision involved when Superstorm Sandy hit the east coast on October 29, 2012. The storm was a blunt, brutal force. Thousands of homes were destroyed and damaged. My town in Connecticut lost power for 5 days and parts of Long Island lost power for 3 weeks. It was devastating. All of Manhattan lost power south of 39th Street for days. As luck would have it our office was located one block south of the line and so were shut down as well. In fact someone dubbed this powerless new neighborhood (within a city that loves neighborhood acronyms like SOHO, TRIBECA, FIDI, MEPA, etc.) as South of Power or SOPO.

Newsday published a nice housing related summary piece for the anniversary. In the aftermath, foreclosure rates for Long Island, while falling, still remain unusually higher despite the areas improving non-distressed market. However the south shore of Nassau County, the area hardest hit by the storm, seems to be leading the housing recovery in Long Island. But part of the price trend story is that some of the damaged housing stock has been rebuilt or upgraded.

Using our data, Brick Underground provided some graphics using price changes in hard hit areas against a larger control group. The impact to price and sales in the region varied significantly. One of the key takeaways from these articles is that the affordability of coastal living has been diminished. The housing stock is undergoing upgrades and the cost of homeownership will be permanently higher through property upgrades, building code changes and significant insurance increases. 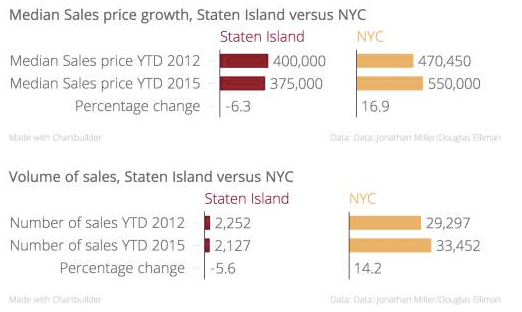 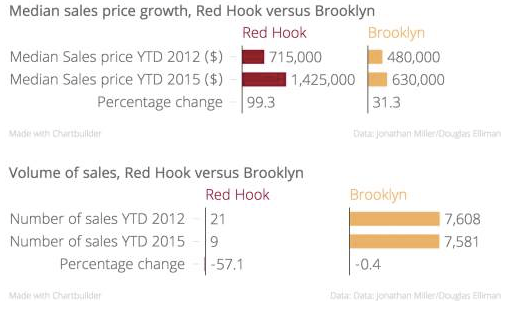 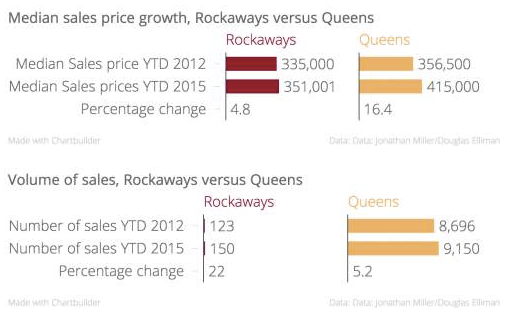 Aspen Ski Housing Is Warming Up

We published our research on the Aspen and Snowmass Village housing markets a few weeks ago. It’s a surprising small market with a significant range of housing prices, not unlike a market like Manhattan, hence the trends can be precision-challenged. Not unlike the other 17 U.S. housing markets I cover, Aspen and Snowmass Village have skewed towards luxury housing as well. I also see these changes at other mountains I’ve skied: Stratton, Vail, etc. that largely began during the bubble a decade ago. I just began covering Aspen at the beginning of the year and have been steadily compiling an archive of housing data back to 2004. This week I got around to charting the market a number of ways. Here’s the library and I’ve inserted a few of my favorites below. 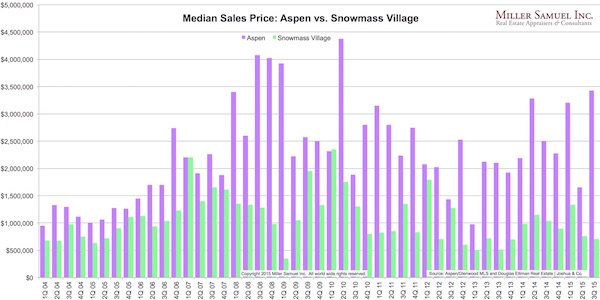 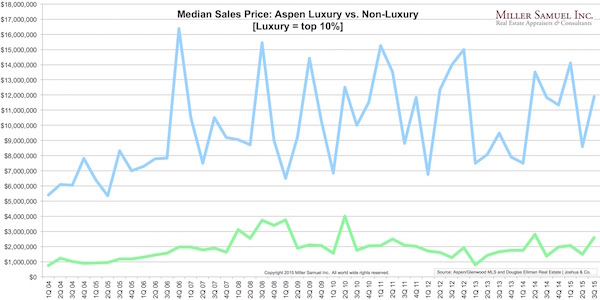 While we are on the topics of cold and precision, I’ve been tracking the absorption rate of the Manhattan market by property type and price range since the summer of 2009. It’s been fascinating to watch the pace of the bulk of the market speed up as it continues to be challenged by inventory and the upper end of the market slow down as development continues to target it, necessitated by record land prices. I’ve placed the October 2009 chart against the October 2015 chart. Incidentally, this is a pattern I am seeing across most of the housing markets I cover. 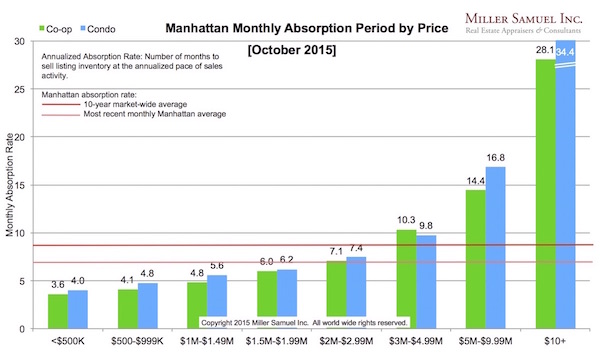 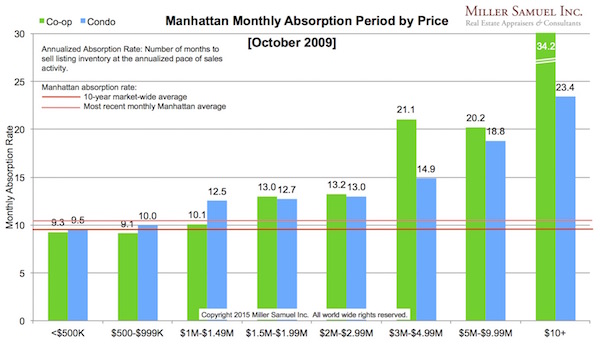 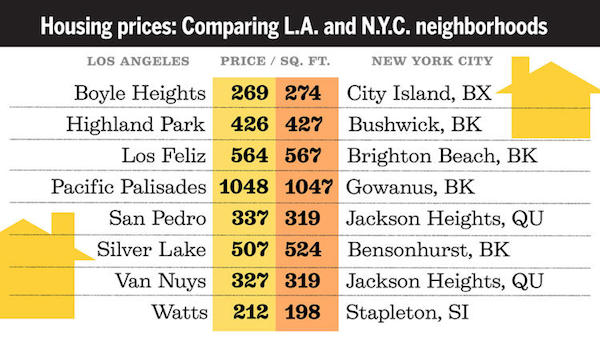 Checks from China
And lets get to the bottom of how the Chinese extract money to invest in U.S. real estate. It’s actually quite simple, they use checks. Here’s the schematic.

The WSJ Uses Local Brooklyn Dialect (and our data) 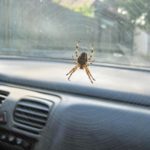 Yesterday morning I was rushing to work – I jumped into my car parked in our garage and a huge spider, the size of a giant bumble bee, had weaved a thick web a foot away from my wide-eyed stare. I grabbed some papers to swat it away but it scurried off in my car nowhere to be seen. I was running late and made the drive with my “spidey-sense” on full power.

Fast forward to the evening hours. I opened my car in a dark parking lot and there it was again, inches from my face with a heavy duty web nearly completed. I swatted it away but the door light suddenly turned off. I fumbled for my keys to prompt the door light to turn back on. When it did, I looked down at the giant spider crawling up my leg. I swatted it again and it was nowhere to be seen…

If you need something stronger than a spider web in your life with lots of lights turned on, sign up for my weekly Housing Note here. And be sure to share with a friend or colleague. They’ll feel good, you’ll feel better and I’ll be more relaxed.