I just moderated a panel discussion in Boca Raton at a real estate event and it was disorienting. It was 80 degrees and there were palm trees, bright aqua colored water with whitecaps, strong winds blowing inland across the beautiful sand and everyone seemed to be lounging by the pool eating fresh seafood. Admittedly I wasn’t that comfortable being so relaxed in this nirvana so I’m glad I’m back in Connecticut where the temperature is 30 degrees colder, the leaves are turning colors and not a coconut in sight. Apparently I thrive on cold and stress.

To re-orient myself, I wrote quite a bit in the “Appraiserville” section on the appraisal industry. Even if you are not an appraiser, the appraisal process impacts anyone in the real estate business. But before you work your way down this Housing Note, check out this cool info graphic on commuting.

With declining affordability in urban markets, the suburbs are booming.

Back in the mid 1990s after my wife and I moved to Fairfield County, Connecticut from Manhattan, I noticed the decline in housing prices further from the first express stop on the commuter train in Stamford, CT.

I worked on an updated version of the concept for last weekend’s New York Times Real Estate section: What’s Your Commute Time Worth? They did an amazing job on the graphic. I’m working on another idea for them to be shared here in a couple of weeks.

Moving to the Suburbs is not a trend for the Wealthy

There was a great WSJ article on the migration patterns out of metro areas: More Americans Leave Expensive Metro Areas for Affordable Ones The article spoke to me because we are seeing this EXACT pattern in a big way in NYC metro and in other large high cost urban markets. Megacommuting is expanding into a huge deal in Silicon Valley/LA.

Those mostly likely to move from expensive to inexpensive metro areas were at the lower end of the income scale, under the age of 40 and without a bachelor’s degree, the analysis by home-tracker Trulia found.

That’s why we are seeing heavy sales volume in the suburbs while the high end remains weak. This WSJ graphic says it all. 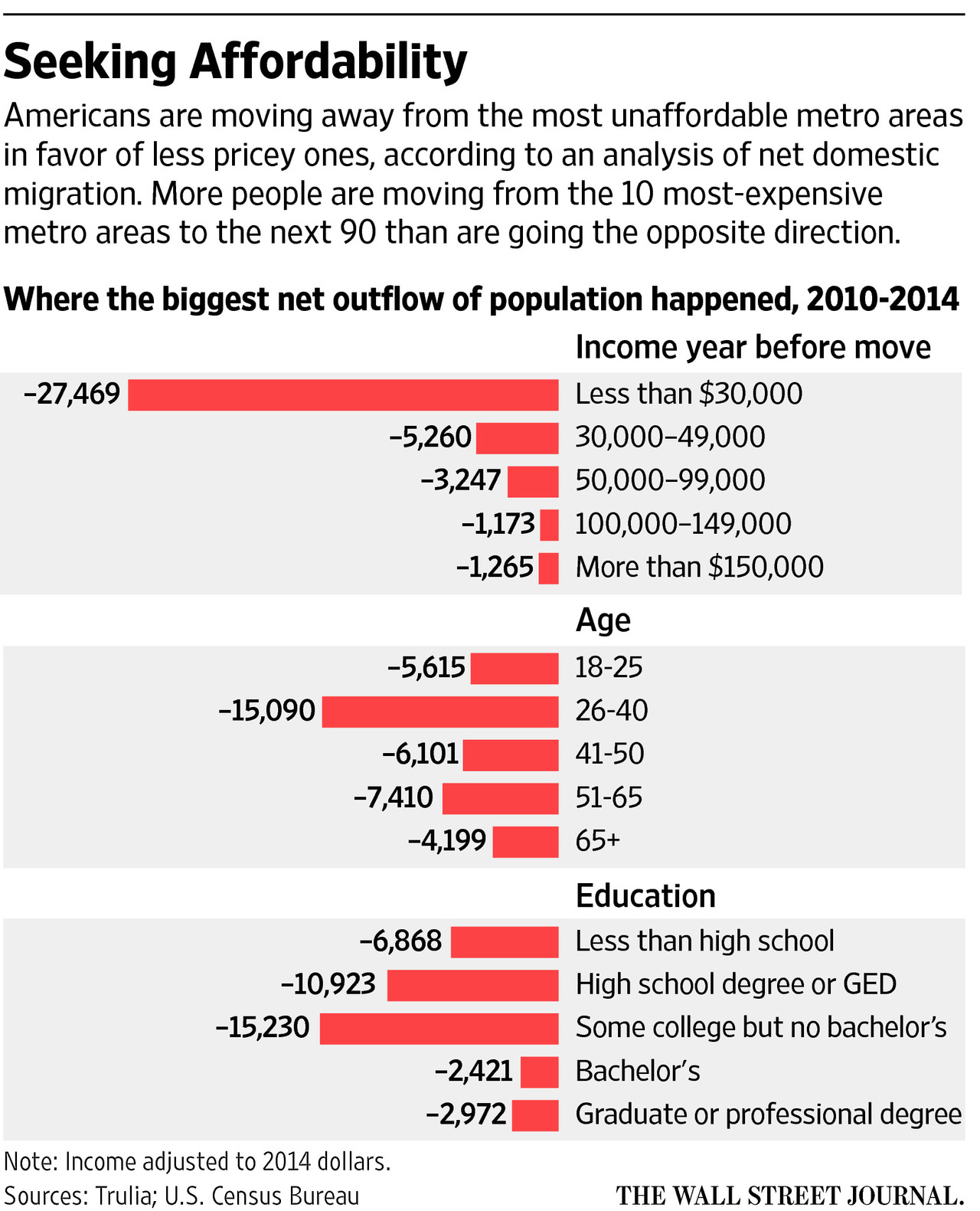 Too Many Urban Parking Spaces Are Bad for City Revivals

A parking space in Hong Kong sold for 550,000 euros (US$610,000) and that’s not uncommon in New York. Despite the high cost, it is fairly rationale when you consider the unit was a modestly priced $HK 56 million ($US7.2M) if you look at these amenities in the context of the properties they are associated with. Hong Kong has the least affordable housing in the world.

In Manhattan, there are parking space sales for $400,000 or more but they are associated with super luxury new developments. I found the average price for a garage space was $191,025 in 2016 year to date. The spaces that have been marketed for $1 million in recent years have never sold.

Parking Irony Alert: I think we are going to be seeing more of these headlines: Oakland council approves sweeping reductions to parking for new developments because walkable cities thrive when parking is reduced. However, it makes them less affordable and consumers are being priced out to the suburbs.

Most affordable neighborhood in Brooklyn, with a catch

Speaking of affordable, the New York Post presented our info in technicolor, sort of. 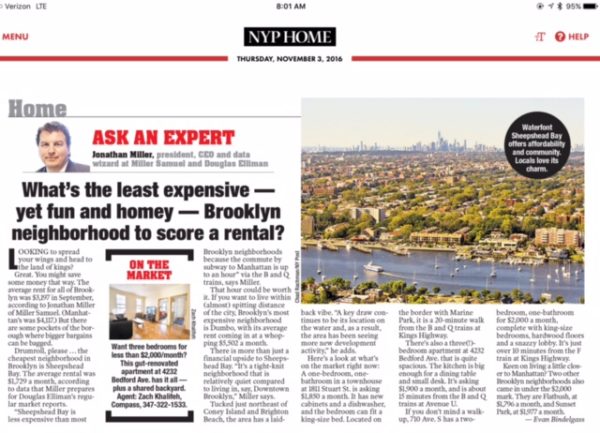 This should probably be a regular column of mine since I obsess with this sinking luxury condominium projects in San Francisco known as The Millennium Tower. From the perspective of an appraiser, a valuation of a condo unit there would be chock full of hypothetical assumptions that would take up more space than the appraisal itself. 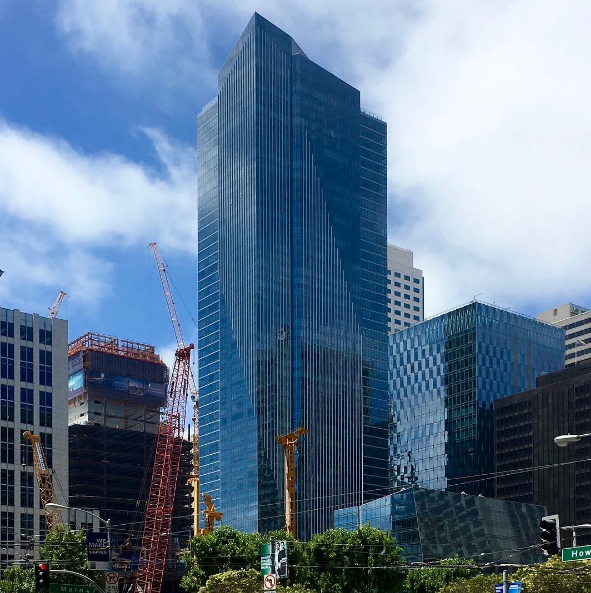 Fannie and Freddie are vulnerable

Fannie Mae showed a profit of $3.2 billion in the third quarter so what’s the problem?

In 2008, more than 90 percent of the companies’ revenue came from risky investments involving borrowed money. Today, their revenue come primarily from guarantee fees, which are reliable and stable.

The U.S. Treasury has enjoyed taking all the profits of the former GSEs for themselves and that works while interest rates are low.

When mortgage rates rise, which they inevitably will, the decline in the value of Fannie’s and Freddie’s mortgage holdings could well exceed their operating earnings for a given quarter, creating an overall loss. Under the companies’ agreement with the Treasury, they are required to borrow money to cover the loss. That will likely trigger headlines along the lines of, “They’re Back! Fannie and Freddie Get Another Bailout.” And that will attract the attention of the markets, which will begin to focus on the companies’ lack of capital, realize that the Treasury’s support is not open-ended and possibly start a panic.

Mortgages are a fundamental underpinning of the U.S. housing market so the sooner this misunderstood issue is resolved the better.

Appraisers Are Not Good At Being Criminals, Just Like to Appraise

In the aftermath of the financial crisis, there have been many mortgage fraud schemes revealed, using appraisers as the enablers. What has been consistent in the process has been the motivation of the appraisers – to get a few more appraisals at the typical fee. The ringleader in these schemes makes off with tens of millions of dollars while the appraiser that enabled the deal got 20 more assignments at $300 a pop. Here’s the story of a trainee who flunked the appraisal licensing test (how is that possible?). Instead of studying, he decided it would be better to steal his mentor’s license and undertake a complex fraud. Jail is next.

Maybe it is something that drives us. Appraisers actually love to appraise. Anne O’Rourke’s Appraisal Today presents a great chart from Appraisal Port.

As I returned from Washington DC on Amtrak, after attending the Appraisal Standards Board Public Meeting, Bill Rayburn, founder of FNC who just got a huge payday from their sale to CoreLogic, literally sat next to me. What are the odds? Crazy. Bill has a polarizing figure in the appraisal industry, but it was certainly interesting to connect with him again and hear what he is working on next. His firm FNC had reached out to me a decade ago to try and leverage our Manhattan co-op data into some sort of analytics but ultimately I wasn’t interested. I even interviewed Bill and the COO, Bob Dorsey in separate podcasts in 2009 and 2010 respectively.

The formerly biggest appraisal firm in the New York City region and our main competitor was known as Mitchell, Maxwell and Jackson (MMJ). The two partners, Jeff Jackson and Steve Knobel, started out in the early 1990s with a couple of assistants and made a name for themselves. During the housing bubble they exploded in growth, at one point touting an appraisal staff as high as 100. They were the beneficiary of the mortgage broker lending system that accounted for nearly two thirds of residential mortgage lending. MMJ essentially cornered the market on mortgage broker appraisals. By dominating the market, they actually did my firm a big favor by crushing all the suburban appraisal firms that would have one token appraiser cover Manhattan. Since my firm avoided mortgage brokers as much as possible during the housing bubble, MMJ’s largess essentially removed a lot of potential competition by being so dominant. Since banks never had fewer than two firms on their appraisal panels, we were unaffected.

While our firm employed salaried appraisers performing 6-8 assignments a week, the MMJ appraisers were fee based, often working 7 days and I was told could complete as many as 45 assignments in a week. It was the housing boom after all. Aggressive in sales and growth, the sky was the limit until Lehman Brothers collapsed, marking the beginning of the credit crisis. Jeff had already been phasing out of the firm to sell property in Greenwich, CT. Steven kept the business going as volume fell sharply in the post-housing bubble appraisal world that destroyed most high volume mortgage brokers.

By 2012 MMJ began a new saga, battling the NY State Department of Licensing Services. Their licenses were revoked after a year’s worth of hearings over the use of a former fee appraiser’s digital signature. Then the revocation was undone and restated a few more times as MMJ battled through litigation up the department’s pecking order. After reading the initial 2012 decision it appeared that their legal representation was so over the top with state officials that it became personal. It was my read that this is what got the state got in trouble, eventually losing a recent decision and being forced to reimburse MMJ for $115,000 in legal fees. There is a pending lawsuit against the state from Steven at this point in the amount of $10 million.

Here are the legal documents I’ve seen during this saga. This isn’t a statement or testament about the quality of MMJ appraisals or their business practices. The courts found the state over reached on the MMJ situation. Here are the documents I have. They make a good read.

There has been a lot of talk about Wells Fargo lately but the latest has been a recent settlement of $50 million charge because Wells saddled homeowners who defaulted on their mortgages an additional fee for the appraisal without their knowledge. Here’s the part that confused me about these appraisals:

Wells Fargo typically charged $95 to $125 for the type of expedited appraisal at issue, when the actual cost was $50 or less, the complaint said. The charges added hundreds or thousands of dollars to borrower’s mortgage loans over time, the lawsuit said.

An expedited appraisal fee of $95 to $125? What are their normal turn time appraisal fees? $50? These “appraisals” had to be broker price opinions, no? Please tell me these were not standard appraisals.

It was refreshing to see the Appraisal Institute be proactive on this new development with their letter of concern.

Unlike the Property Inspection Waiver policies announced by Fannie Mae this week  which are limited to lower- risk refinance transactions  the policy change by Freddie Mac appears to be oriented to purchase-mortgage transactions or transactions with the highest risk to the agency. It has become standard practice to obtain a complete interior inspection appraisal to understand things such as property condition. Unlike a refinance transaction, where a previous appraisal is likely to be on file, loan purchases generally have less information available to the agency, which is where appraisal data provides added input to risk management.

Ryan Lundquist shared this link to a Ken Harney appraisal article on December 16, 2001.

The nation’s biggest source of home loan money quietly has been moving to minimize the cost and eliminate the required use of one of the most traditional elements of the mortgage process — the appraisal.

Here’s a followup question to Fannie Mae and Freddie Mac. How’d that decision work out? As I like to use Mark Twain’s quote (paraphrased) “History doesn’t repeat itself but sometimes it rhymes.”

If you need something rock solid in your life (particularly on Friday afternoons) and someone forwarded this to you, sign up here for these weekly Housing Notes. And be sure to share with a friend or colleague if you enjoy them. They’ll become your doppelgänger, you’ll get a cheaper luxury rental apartment and I’ll finally find those Swedish Fish.