Housing Affordability on a Y-Axis, Tryptophan on a Ferry

Presumably it’s Black Friday when you read this and hopefully you didn’t fall for the scam of finding actual deals and inevitably breaking down the front door of your local Walmart. I can only assume my Housing Note readers are still well satiated and had a great time with family and friends on their Thanksgiving holiday. I’m writing this on Wednesday morning just before I leave with my wife and youngest son to drive (and take two different ferries while saying this is “ferry nice” repeatedly to my son’s great annoyance) to spend 2 days with my parents, my sister and her family, and my other sons and their significant others. As a kid, Christmas was always my favorite holiday (for obvious materialistic reasons) but as an adult, Thanksgiving has always been my favorite. In fact for the past 17 years since my parents bought their current home on Shelter Island, I always mark my calendar year as commencing on the moment the Bridgeport-Port Jeff Ferry pulls away from the dock and heads towards Long Island. Forget New Year’s to mark your year…it’s wildly overrated. 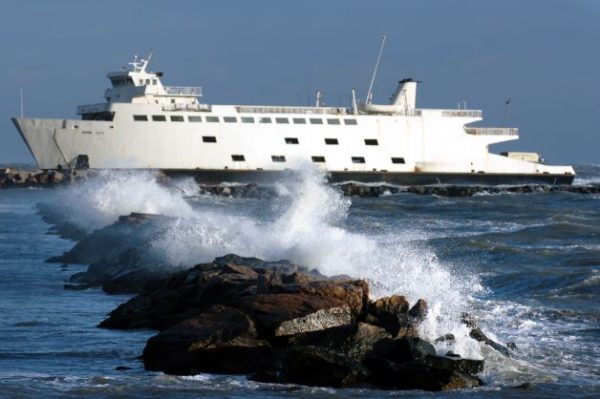 I was going to call this Housing Note “Thanksgiving’s Tryptophan Turkey Talk” until I read deeper, learning that tryptophan isn’t necessarily the cause of the post-holiday meal drowsiness (if it’s on the internet, so it must be true). Now let me at least pretend to get back to the topic of housing during the holiday.

Don’t worry, you’ve had enough “stuffing” in the past 24 hours so I’ll keep it light.

Back in 2004, I started writing a column for Curbed NY called Three Cents Worth that was essentially a chart surrounded by some commentary. Admittedly I go through bursts of creativity with the column and then take a break. Here are the chart thumbnails for most of my columns on the Curbed Network. My original charts were kind of hideous and thankfully the trolls let me know it. But I learned to remove the gimmicky stuff and eventually morphed them into my own style. And every so often a commenter would give me grief about the Y-axis (vertical line) not starting at zero. And not just for my work on Curbed. “If it doesn’t start at zero” they would contend, “the chart is a lie.” This always bothered me because I knew this wasn’t true.

Vox provides a wonderful short take on the Y-axis subject that I promise won’t put you to sleep (remember, I read that on the Internet). It’s called: Shut up about the y-axis. It shouldn’t always start at zero.

Edward Tufte, the zen-god of charts or the art of visualization said this (sorry about the wonkiness here but it might cut through your tryptophan fog):

In general, in a time-series, use a baseline that shows the data not the zero point. If the zero point reasonably occurs in plotting the data, fine. But don’t spend a lot of empty vertical space trying to reach down to the zero point at the cost of hiding what is going on in the data line itself. (The book, How to Lie With Statistics, is wrong on this point.)

For examples, all over the place, of absent zero points in time-series, take a look at any major scientific research publication. The scientists want to show their data, not zero.

The urge to contextualize the data is a good one, but context does not come from empty vertical space reaching down to zero, a number which does not even occur in a good many data sets. Instead, for context, show more data horizontally!

And while you’re at it, read about why he says using PowerPoint during a speech is a horrible idea. It’s a crutch. I avoid using it as much as I can.

And while we’re at it, here is a sampling of some new charts for Los Angeles, CA and Westchester County, NY I whipped up. I cover these and a number of other markets for Douglas Elliman Real Estate. Note the lack of a zero start point on the Y-axis in the first chart. 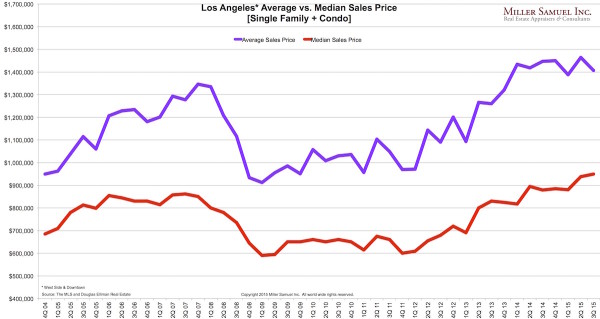 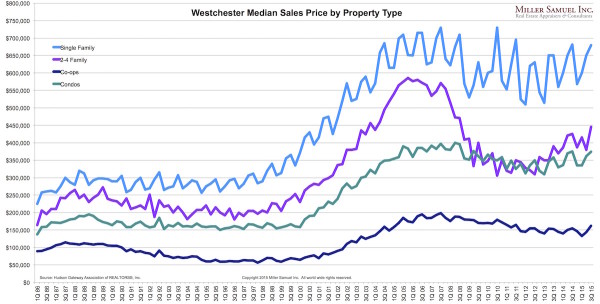 In a refreshing approach, real estate broker Brian Lewis at Halstead in New York City creates amazingly easy to watch listing videos…deadpan delivery with a fun style, while showing off the amenities of the property. He’s done a few hundred but here’s the one written up in People Magazine. No, I DON’T READ PEOPLE MAGAZINE.

I’ve been a fan of Pete Hamill‘s writing for years. When he released his 1995 memoir on his early years in New York called A Drinking Life I appreciated the way he brought the city’s texture to his New York City stories. I went to the book signing with my oldest son (then 6) and told Pete my son liked to write. He told my son, “if you write every day, someday you can become a great writer.” Of course my son was looking around at all the people and curios nearby and seemed to miss these words of wisdom. Fast forward 17 years to 2012 when I went to his book signing for Tabloid City. I recounted the quick story to Pete and told him my son probably didn’t hear him back in 1995, but ended up becoming a talented writer and had considered journalism as a career at one point.

Fast forward once again to the present. Pete Hamill just wrote a great piece for National Geographic called A New York Writer’s Take on How His City Has Changed With wonder and dismay, Pete Hamill reflects on 72 years of transformation as his hometown is continuously rebuilt.. Loved it.

Talking Turkey About First Time Buyers and Killing Your Darlings

NAR Existing Home Sales – Released on Monday, seasonally adjusted sales fell 3.4% month over month and increased and increased 3.9% year over year. The bigger story is that housing inventory fell 2.3% month over month and fell 4.5% year over year. Tight supply continues to remain the key characteristic of housing right now. More of a wrinkle in the data, the share of first time home buyers edged up to 31% of all sales from 29% a year ago. First time buyers for this year are at their second lowest level since 1981.

Because credit conditions remain tight, causing inventory to remain low, causing housing prices to rise, keeping first time buyers out of the market. I can only imagine the flood of pent-up demand from millennials if by a miracle, mortgage lending were to normalize overnight (and I didn’t gain weight after my Thanksgiving meal).

The New York Times published a solid common sensical approach to those rarified first-timers Tips for First-Time Buyers. Admittedly my favorite section of the piece was called “Killing your Darlings.” Just love that concept (and that’s not the tryptophan talking). Of course my writing is full of my darlings. I can’t help it.

Talking Turkey About Micro-Apartments As A Housing Affordability Solution

In addition to the piece on First Time buyers in last weekend’s New York Times real estate section, there was another also related and great article on “Micro-Apartments.” The concept is being tested in many cities across the U.S.

Apartments in New York City ordinarily can be no smaller than 400 square feet, but the city waived those restrictions for this development. A zoning proposal by the Department of City Planning could open the door for smaller living quarters, if it is approved by the City Council. It calls for eliminating the 400-square-foot minimum to allow for smaller apartments and loosening some density restrictions to fit more units into buildings.

The idea is to get the price point lower and encircle the apartment with plenty of building amenities and let “size” be the variable. After all, New Yorkers don’t spend as much time inside their apartments as suburbanites spend in their single family homes (note: I made this up, but it’s the impression I have, having lived in both types of housing). However, whenever I hear the term “Micro-Apartments” I still since there are thousands of them already.

My parents own a 300 square foot (on a good day) pied-à-terre in the city in a building with lots of similar sized apartments. New York City apartment complexes like Tudor City are chock full of ’em. So it’s not about whether they will be accepted by consumers for their small size. That day arrived decades ago. The real driver of this is affordability. Of the 14 units that were “micro-apartments” in the new development profiled, 60,000 people applied. That’s simply staggering and shows how incredibly strong the demand for affordable housing is.

The key adversary to the development of affordable housing nationwide are the landowners, who base their land value on super luxury style developments. Municipal governments simply don’t have the financial resources to subsidize enough housing to meet demand. The remaining studios in the featured building are 260 to 360 square feet with rents being offered at about the median rental price for a Manhattan studio whose average square footage is about 550 square feet. In other words, the rent per foot is almost double the overall market rate. You can see the challenge to creating affordable housing in this one example.

If I’m losing you in the density of information as you grapple with your the tryptophan fog and strongly considering an upcoming New Year’s promise of eating less (remember I pick Thanksgiving over New Year’s to make those types of promises), consider juggling.

But if you need something besides juggling things in your life (particularly on Friday afternoons), sign up for my Housing Note here. And be sure to share with a friend or colleague. They’ll feel good, you’ll feel better and I’ll be able to multi-task.