After the Black Friday Freight Train, It’s All Housing Tryptophan

Eventually, you just get used to it…

I’ve touched on this topic quite a bit over the past year. When I’ve walked around a number of different cities and towns this year, it is clear to me there are a lot more vacant storefronts.

Here is the old bodega version of that narrative that was told on APM Marketplace across public radio stations in the U.S. My voice sounded weird to me.

And here is a misinformed piece in New York Magazine that goes counter to the visceral reality. The debunking a bogus 20% number attributed to a retail broker was the basis of saying the retail apocalypse wasn’t real. Ugh.

Yet there is so much more to the story.

WATCH: Everything you always wanted to know about Opportunity Zones

Here’s a chart I whipped up to show how the fourth quarter Hamptons market sees more than its fair share of big sales in what is typically the weakest quarter of most housing markets. The reason? Tax planning. 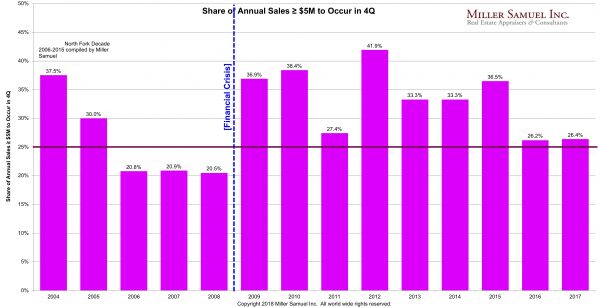 Dear Readers: I hope everyone enjoyed their Thanksgiving festivities. Housing market activity typically takes a break this week so the vast majority of these Housing Notes covers what’s going on in Appraiserville:

Rumormill: AI National Is Going To Try And Take All Chapter Funds AGAIN

It’s been two years since senior executives at The Appraisal Institute headquarters in Chicago, referred to as AI National, attempted to seize local chapter funds. I was just told by a trusted source that AI National will move forward on the “taking” plan.

It’s why I entered the conversation in 2016, providing regular takedowns of this fraud.

Coester Chronicles: I Hope CoesterVMS Doesn’t Owe You Any Money!

There has been a lot of discussions circulating this week after VACAP broke the news that the Coester VMS has run out of funds to pay for the appraisals they ordered. A law firm acting on the behalf of FVCBank, a CoesterVMS client, has sent a letter by email to appraisers providing the point of contact for those looking to collect their fees. I would assume that this bank seized their assets. I don’t know whether they represent any other banks in this situation.

From AppraisersForum, Andy Arledge of Freedom Appraise, one of a number of new A La Mode competitors, commented: 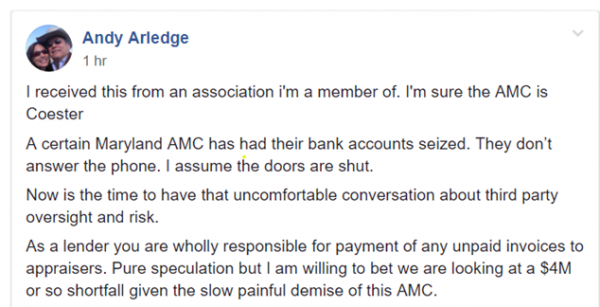 Here in Appraiserville’s ‘Coester Chronicles’, Appraisalblogs, Appraisersforum, and other sites have been warning appraisers for more than a year that this day may come. The word around the industry back then was that Coester owed millions in appraisal fees. If true, I can only assume appraisers are owed millions more now. 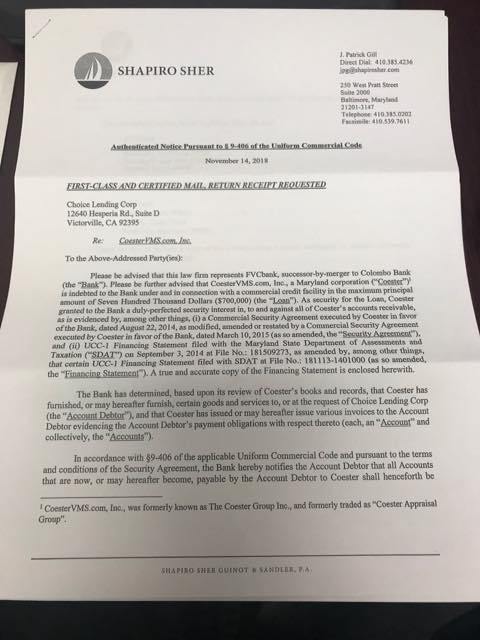 Hopefully, this will all come out in the wash but sadly, appraisers shouldn’t count on obtaining their long-owed Coester fees.

The intense lessons to be learned are:

1) AMC’s often demand proof of an appraisal firm’s business viability to receive work, yet it is clear that this demand should cut both ways. Recent news about Coester and Clarocity make that clear.

2) Unlike in the past, residential appraisers now have resources including on the ground blogs, Facebook groups and individual appraisers providing transparency and advocacy that are both readily available and free. Start reading all these sources regularly – get involved – these resources are motivated by a sense of right and wrong (because there isn’t any income to be found in their efforts).

As the headline says, Clarocity (CLY) Reaches New 1-Year Low at $0.01 on November 19th. Trading was haulted by Canadian regulators on November 15th.

And this press release:

Appraisers should be very concerned about getting paid for their services until more is understood about this financial jiu-jitsu.

An appraiser shared an email survey concerning hybrid appraisals. The survey reveals the fees they are thinking of charging. These fees aren’t that different from what I’ve heard elsewhere. 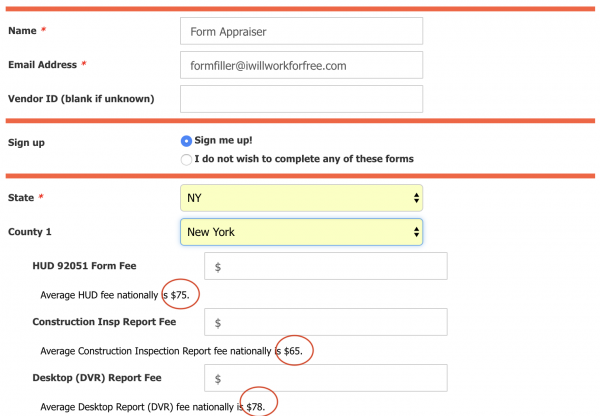 It’s actually quite telling on how the AMC/Mortgage Lending industry sees the appraiser’s role in providing a reasonable benchmark on their collateral to make more informed lending decisions.

Here’s the scenario – take the $78 national desktop report fee and divide it by the $500 average appraisal fee as quoted by Realtor Magazine. Now think in terms of the inspection versus valuation.

$78 Valuation / $500 full appraisal = 16%. Don’t get me wrong. Appraisers are willing to work for $78 on desktop valuations but many have little choice in the submarkets they cover. It also shows how the valuation expertise is viewed as a commodity and not a skill that takes years to obtain.

The fact the mortgage industry thinks a $78 expense is a reliable expenditure for a reliable valuation suggests we will be looking at a significant mortgage bubble in the future.

To all you 16-percenters out there – start taking stock of what you are really worth.

Regulators Are Pushing Hard for Requiring No Appraisals For Most U.S. Mortgages Part I

Next week I dive deeper into the anti-quality valuation sentiment outlined in the Treasury outline.

The federal government is pushing to eliminate the need for appraisals under $400,000. I threw together a quick analysis of how they are effectively saying that no appraisal is needed for nearly all mortgage applications nationwide. It’s kind of amazing. I’ll devote more time to this issue next week after the tryptophan wears off (ok, ok that’s a myth).

A deeper dive is coming next week.

I hope you cooked your Thanksgiving turkey the old-fashioned way…