Our Tall Housing Future Is Still Defined By Its Past

The following conversation is amazingly quaint.

Ironically, Bill Gates’ Microsoft figured out the internet too late to dominate it as they did for their Office Suite (that included Word & Excel). It’s hard to imagine Letterman and a large swath of America was so incredibly wrong either. As email was entering mainstream real estate practice in the late 1990s, a top real estate agent I know, who is still around, made the case to their tech people in her firm: “Why do I need email when I can just pick up the phone?”

In 1995, only two years after the birth of the worldwide web, @BillGates tried to explain ‘The Internet’ to David @Letterman

Technology pioneers today face the same difficulty and ridicule as they attempt to describe artificial intelligence and blockchain pic.twitter.com/HvRoPF6V1L

How Do You Know Your Future Neighbor is A Nightmare?

My wife and I were home-shopping in 2004 when the market was tight, and we placed a bid on a house that was a stretch for us, so we didn’t offer full ask. We were outbid and lost the house. We found out later that the sellers were moving because of a nightmare neighbor. We consider ourselves very fortunate.

One of my sons and his wife are under contract for their first home right now and I think back to our experience, and worry a little bit. Most people are good, and the odds are against such a situation like the following…

Woman in my town just bought a home from my realtor friend. Here is the “Welcome to the Neighborhood” letter she just received. ????#designerFence pic.twitter.com/k1kbVZZwmU

Can Residential Buildings Be Too Tall For Consumers? Apparently, The Answer Could Be Yes

James Tarmy of Bloomberg moderates an interesting conversation with developer Arthur Zeckendorf and starchitect Robert A.M. Stern. Having spoken with James for a number of his articles, I have always found his take on eclectic real estate topics a great read. 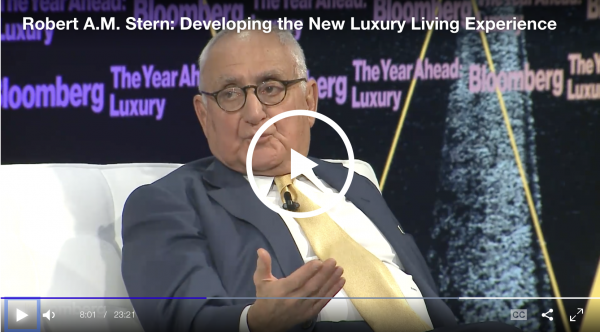 Too Much SALT Wasn’t Good For the Market, But Adjustment Is Well Underway

Nearly two years ago, I was criticized by a Westchester real estate brokerage firm that competes with Douglas Elliman after stating in our Elliman Report: Westchester Sales that the drastic change in federal deductions from SALT would adversely impact the housing market. The Westchester sentiment then was that because of the AMT (alternative minimum tax), the SALT tax would have a nominal impact on the assumption that most homeowners there don’t take deductions for SALT and property taxes. Yet Westchester sales fell year over year for six straight quarters, and that firm modified its messaging. Pushing that silliness aside, The Real Deal presents a solid take on the state of the market since SALT..

“At all price points, including the higher end, sellers are coming to better terms of what a house is worth, and buyers are getting a better grasp on what they are willing to spend,” he said.

Brokers said buyers started stepping up shortly after they found out what the damage was from their 2018 tax bills.

“When buyers met with their accountants, it was almost like a faucet went on,” said Deborah Doern, regional vice president for Houlihan Lawrence in Westchester.

Because of the trade war and the resulting flight to safety by investors, the Federal Reserve has been aggressively lowering rates and as a result, mortgage rates have fallen sharply over the past year, mitigating some of the damage of SALT. One important consideration of SALT that gets missed. I believe that many in the market see SALT as a “forever” weight on the market when, in reality, once prices slide to equilibrium, it won’t be a market obsession anymore because it will already be baked into the price structure of the market.

Every drop in pricing brings the market closer to that equilibrium.

And no, I’m not speaking about shadow listing inventory. Rentcafe shared a study on the significant shift towards taller buildings. Here’s a 30 city building type breakout for the past decade with the interactive version below:

While I lived in Chicago for three years following college and kept loose tabs on the market, I had no idea that condo deconversion back to rental was such a thing. In fact, the condo to rental phenomenon is such a big deal that the City Council just passed a “Condo Deconversion Ordinance” to slow the frequency of these occurrences:

the number of “yes” votes needed from condo unit owners to sell the building to an investor, from 75 percent to 85 percent. 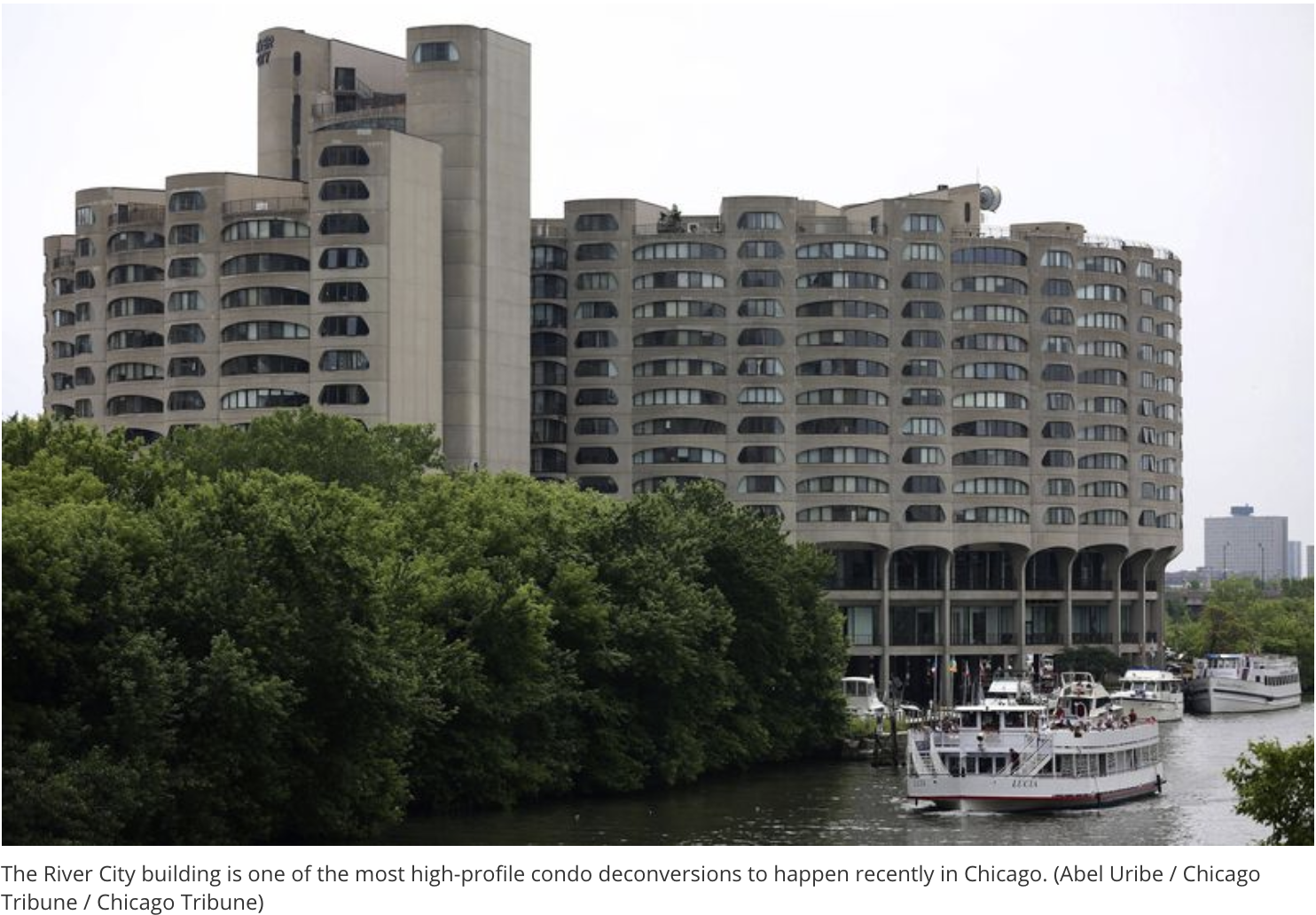 With roughly 50% of buyers in LA’s downtown condo market coming from China, the two-year-old trade war and capital restrictions are crushing sales in the submarket. 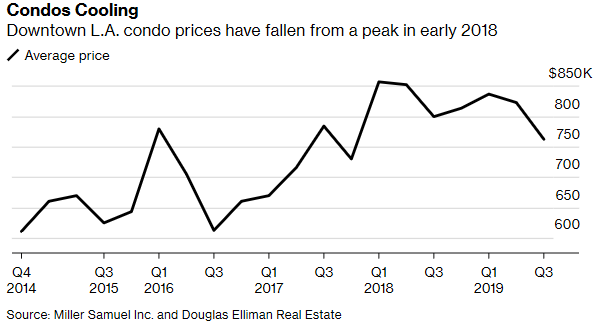 Using our research from the Elliman Report released for the New York City rental market, there have been a number of articles that delve into the topic. The slowing luxury sales market has motivated would-be buyers to rent out luxury property temporarily, and at the same time, would-be sellers are listing properties for rent to stem the bleeding.

Incidentally, the number of new Manhattan leases at or above $10,000 per month has jumped 21.1% over the past three years. Before that growth began, this market segment was languishing from oversupply.

Here’s CNBC taking you into a $100K per month Manhattan rental:

This year 30-year fixed mortgage rates have been bouncing around between 3.5 and 4.5 percent all year

at 3.66 percent this week, toward the lower end of that range

All I Do As An Appraiser

Literally all I do as an appraiser:

I know Zillow is higher.
Cost doesn’t equal value.
Nice zebra wallpaper.
That’s not a comp.
It’s about the market.
Zillow can’t smell the 34 cats that live there.
Prices don’t always go up.
It’s not all about price per square ft. https://t.co/n1RhK2tXSd

I reread last week’s post in Appraiserville: “NAR Real Property Valuation Committee Issues Position On Bifurcation” and felt I left the reader hanging with this incomplete thought: But I don’t want our industry to think: “There, we’ve addressed and resolved the threat to appraisers and more importantly, the public trust.”

After marinating in this topic, I believe the more accurate way to think of this new NAR policy position is this:

One of the largest residential real estate trade groups (NAR) developed an appraisal policy on a controversial appraisal topic: bifurcations. Appraisers have been battling the implementation of bifurcation for several years, largely on the misrepresentation of future providers of such services such as AMCs and future users of this service, such as banks. Bifurcations may have some very limited uses, but I object to portraying it as an industry-wide replacement for full appraisals. Bifurcations are much less accurate, more expensive, and slower to complete. But other than that, they’re awesome.

Regulators like FHFA reach out to groups like NAR to get feedback on controversial proposals for policies like this. Now one of the largest residential real estate trade groups with about 400 lawyers will be pushing this policy through all their channels, and that is a good thing for the appraisal industry. Groupthink has been steered to the appraiser’s way of seeing the world, the last protector left in the mortgage process to protect the public trust.

The VA Provides A Sane View on Hybrids With AAPP

The Veterans Administration has provided a position on controversial hybrid appraisals (aka bifurcations):

which states “[t]he Secretary shall permit an appraiser on a list developed and maintained under subsection (a)(3) to make an appraisal for the purposes of this chapter based solely on information gathered by a person with whom the appraiser has entered into an agreement for such services.”

In other words, the appraiser has to form an agreement with the inspector since the inspection is critical to the reliability of the appraisal. In my view, this policy is the equivalent of a “no, we don’t want hybrids.” Impressive.

This appears to resolve an important aspect of the bifurcation insanity, where it has been presented that the actual appraiser has to rely on the inspector but can’t interact with them or have any understanding of their competency. This depiction was making appraisal industry E&O carriers salivate with excitement over the fresh income sources for an entirely new category of litigation.

The VA seems to have addressed this gaping hole in logic with AAPP. More on this topic here.

Back in the late 1970s, when comedian Steve Martin was at his standup peak, he appeared on Saturday Night Live in a routine whose theme was “How to have A Million Dollars And Never Pay Taxes.”

Steve got right to the heart of the matter:

“First, get a million dollars…”

Appraisalbuzz provided a press release type piece on luxury real estate appraising, and I did a double-take wondering whether this was a parody. McKissock, a well respected online education company, now offers a designation for luxury real estate appraising, which I find quite silly. Here are the steps they shared to get into this niche so appraisers can make more money and work fewer hours per this piece:

1) Become a certified residential or certified general appraiser (licensed appraisers are a tiny segment already)
2) Make sure you’re well-suited to specialize in luxury appraisal (don’t wear the same shirt you used to change the oil in your car)
3) Familiarize yourself with the luxury home market(develop local market knowledge which takes years)
4) Earn a professional designation (get the CLHA designation today!)
5) Get started as a luxury real estate appraiser (find wealthy attorneys to give you business)

In other words, this new designation conveys the appraiser’s luxury expertise to the world. But it can’t!

In reality, many appraisers don’t understand that the organization creating the designation has to spend a lot of money market the designation’s brand, or the consumer will place no value in it. And appraisal organizations have never demonstrated adeptness at doing so, largely because it is too freaking expensive. Early on, appraisal designations did mean something, but with the advent of appraiser licensing/certification and the proliferation of new designations as largely revenue opportunities, their effectiveness for generating new business is severely limited, except perhaps within the old guard of the profession itself.

Still the only acceptable way to dismount from a swing. And true ballers always stuck the landing. pic.twitter.com/tPqM8fk882