HQ2 Housing Edition: Doubling Down Doesn’t Mean You Get What You Pay For

There has been a surprising amount of pushback to the Amazon HQ2 decision to select NYC as one of the locations. Municipalities have had a long tortured experience with public financing of sports stadiums. However I do believe there is a net positive for NYC here, but it’s not a straightforward assessment and the announcement was not well-received given the affordable housing crisis and aging transportation infrastructure.

Double Stuf's "are actually only 1.86 times bigger than regular Oreos"

One of the biggest mortgage lenders in the NYC metro area began requiring 25% down for loans above $601,450 which accounts for a large share of homes across the county.

I live there and my firm appraises there in addition to NYC.

One thing that was odd about this decision is that Fairfield County has outperformed the adjacent Westchester County in New York State and is less exposed to the new federal tax law that caps property tax and SALT decisions at $10,000 combined. They haven’t applied this underwriting restriction to Westchester.

And in fact, there is evidence that sales of high-end Fairfield properties such as Greenwich are seeing some gains – we noted this in Greenwich, CT at the end of the third quarter. 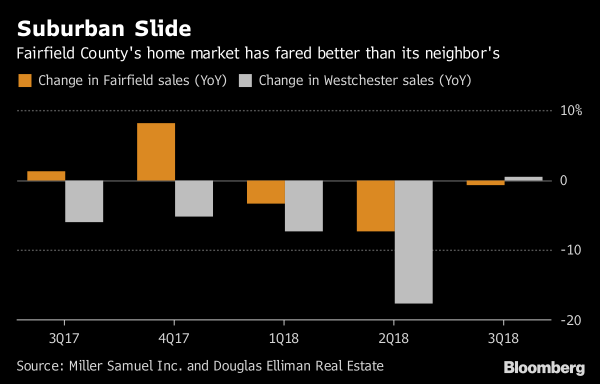 After all the bad lending decisions made in the run-up to the financial crisis, the harsh clampdown on underwriting standards when the housing bubble burst actually damaged the value of the collateral as a result. Fannie unnecessarily crushed the condo market when they tightened underwriting overnight. By restricting lending, downward price pressure expands.

On the other hand, here is an example of a lender being proactive (but not consistent). If warranted, they should have made this move back in 2011-12 and not waited so long. In our data and experience, the market metrics have improved over the past five years. What do they know that we don’t and they won’t share?

The Housing Market Is Disconnected From The Economy

This phenomenon is confusing consumers since the housing market often moves with or even in front of the economy. Not in this cycle. Housing sales, a far more important barometer of market health than prices, are falling despite a strong economy.

Before you post pictures on Instagram today, you should read this article: Why the Housing Market Is Slumping Despite a Booming Economy.

Sales of new single-family homes were down 22 percent in September from their recent high in November 2017, and existing home sales in September were down 10 percent.

We are seeing listing inventory rise nationwide but there isn’t a glut – it is still tough to find an accurately priced home. For many markets, affordability has been shrinking with years of price gains fueled by limited supply and now made worse with rising mortgage rates.

When we lived in Manhattan circa 1990 and were thinking of moving, we rented a car and drove into Connecticut to explore the possibility of living there. We passed through New Canaan and noticed that all the real estate signs has no corporate logos. But I recall the design of the signs matched their company branding which seemed ridiculous. It was as if the town was trying to pretend that displaying brands was in poor taste. During the 1990-91 recession, there were a lot of homes for sale just like now.

Fast forward to this summer,

The New Canaan Board of Realtors had publicly announced the six-month trial ban in early June, citing the dramatic shift toward online house-hunting and a desire among its members to improve the look of the pricey town…“When you have as much inventory as we have, the signs make it look like there’s something wrong,” said Doug Milne, an agent with Houlihan Lawrence who specializes in the towns of New Canaan and Darien, explaining part of the thinking behind the proposed sign ban.

With sales down 25% for the first half of the year to the same period a year ago, this agent suggests that consumers will be more willing to buy and pay more in a town without signs. I would guess that most agents in this market would not agree with Doug or the Board of Realtors leadership. And in fact, their national association told them they couldn’t restrict advertising.

This sign removal effort was an old residual “gatekeeper” mentality that is still lingering from 1990, yet times are different, and most consumers obsess over online listings.

The number of listings has swelled because the market changed and sellers are very much lagging the market. Removing these sales signs was premised on the assumption that buyers won’t look at their Zillow or other broker apps to get a sense of the market.

I’d advise The New Canaan Board of Realtors to come back to the future. 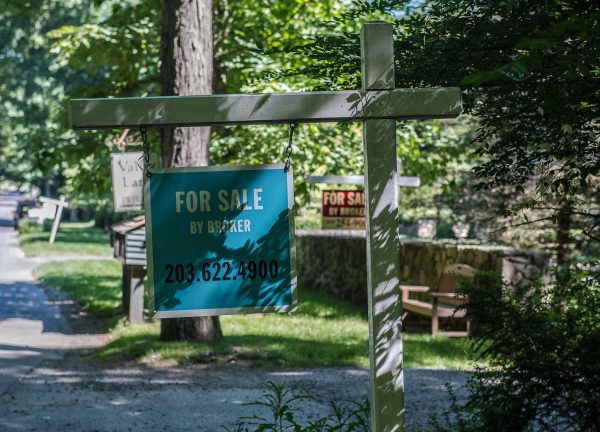 I’ll bet you can order wet blankets on Amazon, no?

I’ll venture a guess and say in the long run there is a net positive in the selection of Long Island City as a winner in the 14 month Amazon HQ2 Sweepstakes. But the deal has a lot of hair on it:

Negatives
– A study shows that these contests “have no discernible impact on firm expansion, measured by job creation.”
– Will likely raise housing costs by melting rental concessions in the immediate and adjacent areas
– Will overtax public infrastructure which has long been neglected
– PRESS Amazon’s HQ2 Spectacle Isn’t Just Shameful—It Should Be Illegal [The Atlantic]
– PRESS The backlash to Amazon HQ2, explained [Vox]

Positives
– Might prompt the state to finally fund an improvement for the 7 train which is at capacity
– Will probably enable more development in the surrounding area
– Well paying private sector jobs fund more private sector jobs
– Raises employment and potentially, wages
– Bails out all the developers who extensively overbuilt rentals
– Will finally bring critical mass to LIC and broaden street retail services
– PRESS Why New York and Virginia were right to gamble on Amazon [The Week]
– PRESS Here’s what Amazon HQ2 employees will face in Long Island City when it comes to transportation, housing and … sewage [Recode] 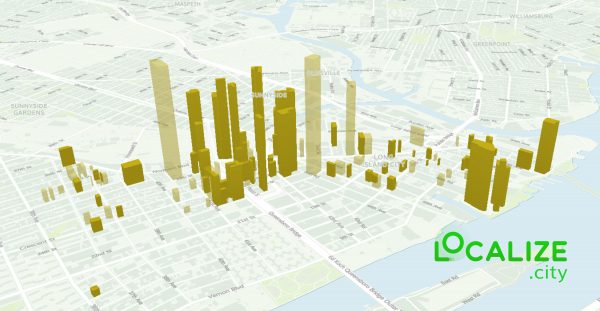 And New York Has Already Established Itself As Tech Hub

Amazon was icing on the cake and was not an enabler. The importance of having a tech hub is that its higher wages offset the lack of hiring in the securities industry. The city needs them as part of the tax base and we already have the tech talent pool to offer them.

This chart blows me away. 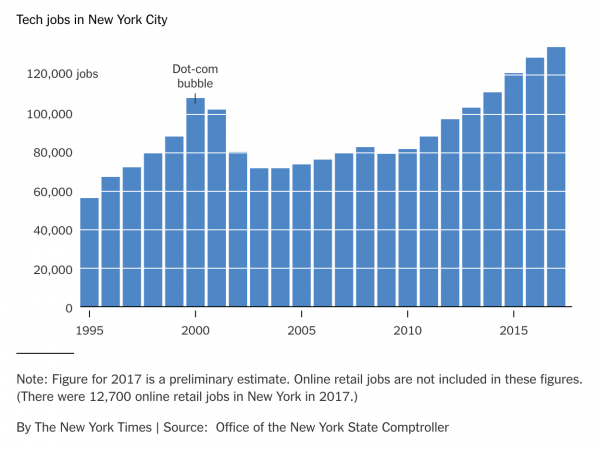 You can poke around our chart gallery here: 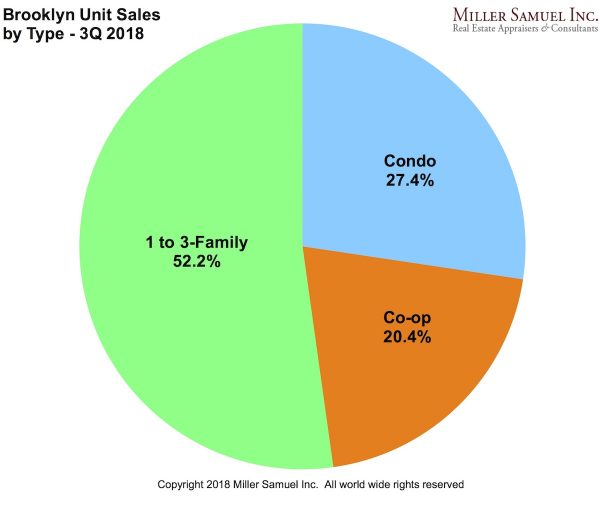 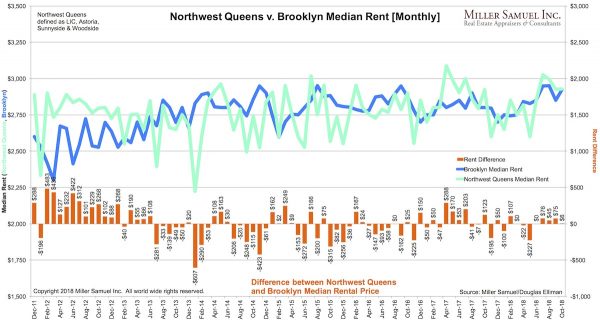 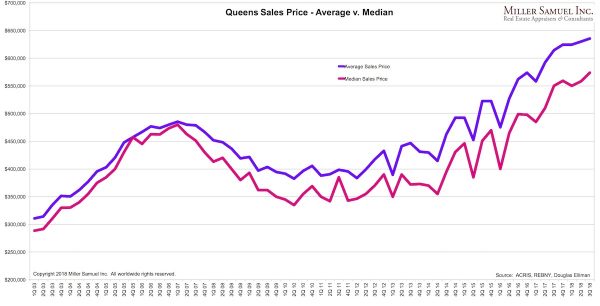 Just one more look back at a stunning success…Appraiserfest.

Up your game – differentiate yourself from your competition.

We all attend appraisal seminars or take online courses to fulfill our CE requirements, but I implore you to consider other types of seminars if it provides value to your practice. Fifteen years ago I took an all-day class for fun to gain insights on presenting data. It was taught by Edward Tufte and if he is ever in your vicinity, I highly, no, enthusiastically recommend the course. The topic was relevant at the time and is relevant today. It was a spectacular class and the materials are the best out there. I applied what I learned to my market reports which came along later. Well, Friday I’m going to Brooklyn to take it again. I can’t wait.

Actually, I have two final thoughts about one subject – Writing. Many Housing Notes readers wonder how they got into a job that required so much, you know, writing. The following suggestions are amazing.

1) This writing sample is beyond brilliant and something I’ve never considered before:

2) I am going to do this immediately:

When you're familiar with a piece, your eyes gulp whole passages and miss typos. New fonts focus your eyes on each letter.