Despite having a reputation as being a difficult person to work with, Apple co-founder Steve Jobs’ marketing legacy is incredible. Being a devoted Mac nut, having built both our appraisal companies using Macs, he made a lasting impression on me. The craft of story-telling he employs is unmatched as far as I’m concerned.

You can go to school and spend years trying to learn about great marketing.

Or you can spend a few minutes watching Steve Jobs – all marketers should carefully listen: pic.twitter.com/I2kMipVg3n

I’ve been the author of the expanding Elliman Report series for Douglas Elliman Real Estate for a quarter of a century (yikes!). What has made this affiliation work so well over the years is that Elliman has respected my independence, a deal killer for me otherwise. With their entrepreneurial business culture, they want their clients to understand actual market conditions to enable them to navigate better. I consider myself fortunate to be affiliated with a firm that has never had an issue with me conveying honesty in my market messaging.

One of our research pieces is the monthly rental report that covers Manhattan, Brooklyn and Northwest Queens in New York City. Although few realize this, 2/3 of the NYC housing stock is rental.

With the massive surplus of news this week, coverage of the rental market reached 18th place yesterday on the ±350,000 Bloomberg Terminal subscribers.

And of course, a chart! 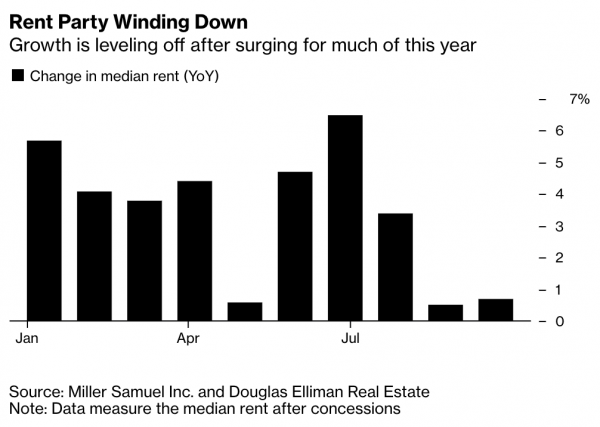 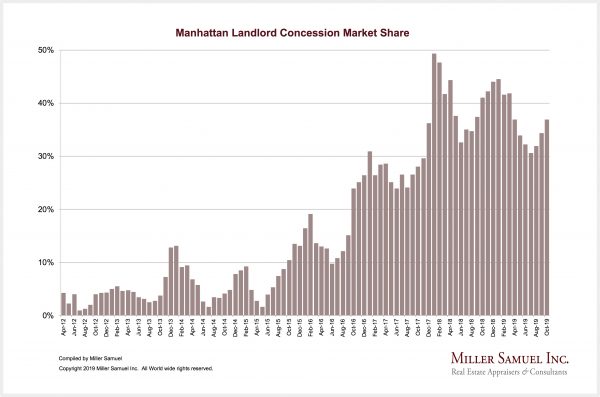 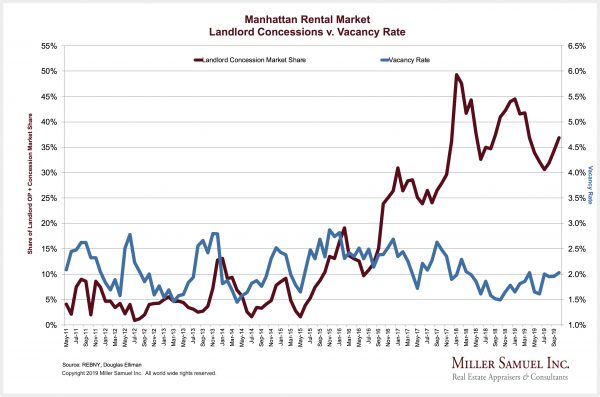 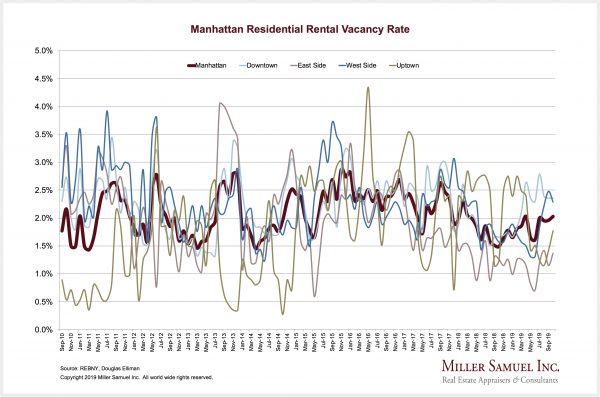 “Rising demand resulted in the largest year over year drop in concessions for 2019.” 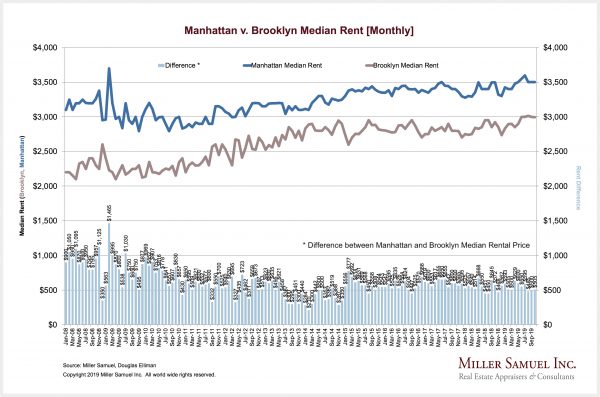 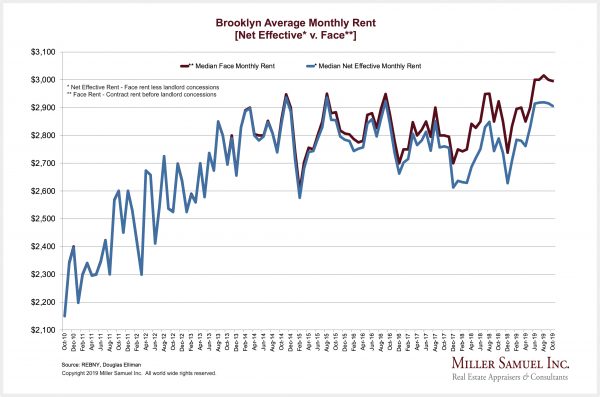 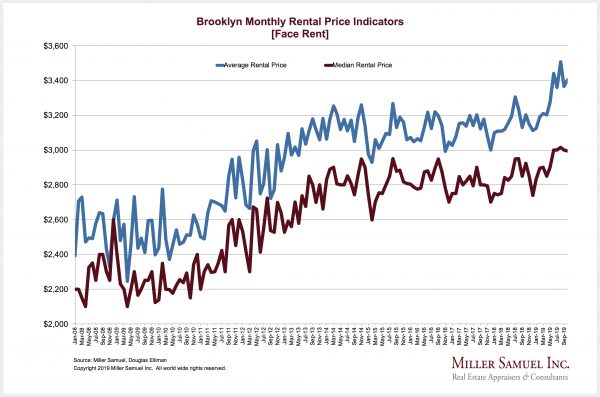 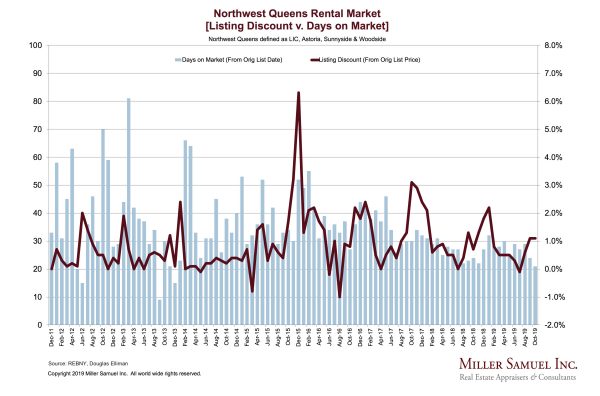 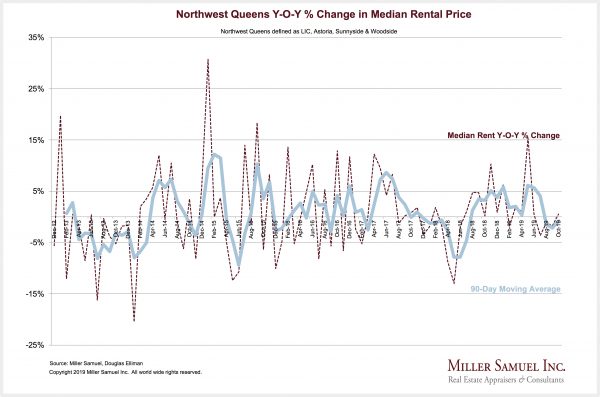 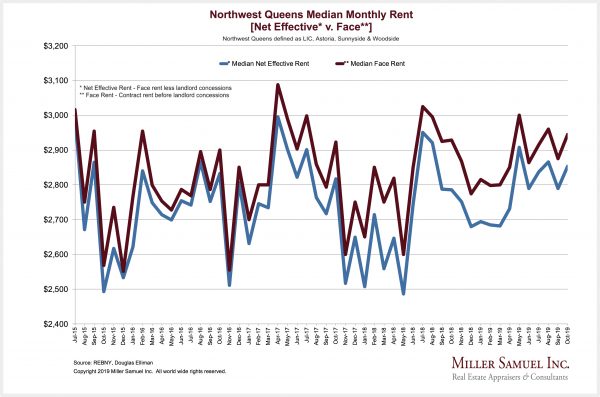 SoftBank Unicorns Got No Apparent Due Diligence

One of the tragedies for investors and current and former employees of WeWork has been the stunning lack of due diligence by SoftBank. I mean, $300 million for a dog-walking app maker and no one blinks?

The sting of WeWork’s collapse is spilling over into other SoftBank unicorns like Compass, the traditional real estate brokerage firm that markets itself as a tech firm, presumably to get a higher valuation. In response to the bad WeWork headlines of late, Compass has sweetened the pot for its agents, probably because of the perception that anything associated with SoftBank is now tainted – that all unicorns received the same lack of due diligence that WeWork did.

The theme of these unicorns seems to be to go big to dominate their vertical, and then presumably after they kill off or buy most of the competition, they can charge higher commissions. They are disrupting through capital, not any apparent innovation. The problem with this strategy, ethically, is that the consumer will end up paying more in the end. With the toxic nature of unicorns these days, that vision is getting blurry. Uber continues to lose billions and was just fined $649 million. Peloton too.

Large signing bonuses create short term loyalty, say, just enough until an IPO when the founders can cash out and leave everyone else with a disruptor that has a lot of capital but hasn’t provided new ideas beyond the traditional brokerage model. I just heard from a broker friend who told me of a top producing team that signed with Compass to get a very large signing bonus to take some of the stress off of maintaining their top performance.

Cooling Rental Markets May Be Holding Back Inflation

Because national rents of primary residences, including the rental equivalent of a home, account for 40% of core inflation calculations, the direction of the rental market has a significant influence on core inflation.

The declines in New York and Boston weighed on the national measure for rent of primary residence, which rose 0.1% on a monthly basis, the least since April 2011.

Click on the chart to read more about this trend. 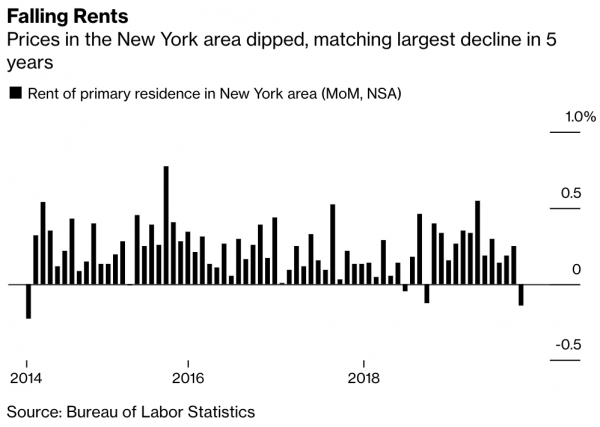 The fight between Bright MLS and Compass over whisper/Pocket listings fight has been in the news. The grand strategy by Compass looks like they are trying to become the center of the listing universe to capture both sides of the commission in an organized way. This practice cuts off inventory access to the broader public unless they go through Compass and place pressure on housing market affordability already plagued by chronically low levels of supply.

This week NAR approved its “Clear Cooperation Policy” meant to standardize how long a broker can hold the listing until they share it with their members on the MLS. The associations have until the spring to adopt it.

If members don’t adhere to the new policy, they can always leave the MLS, I suppose. Look to see how hard Compass fights this policy nationwide. I believe this disrupts their key strategy of destroying the MLS system to become the center of the listing ecosystem.

I typically speak a few times a week to the real estate brokerage industry and have found the word “Recession” undoubtedly comes up. Often referenced as the “R” word, it stokes fear in the hearts of many a real estate broker. We are in late innings of the proverbial baseball analogy cycle, and yet I think the reason for the elevated concern about such a probability is based on what people associate with a recession. The last one involved a global thermonuclear meltdown of global credit, and those conditions are associated with how a recession might feel today. Yes, we are still in an over-corrected hangover phase of the financial crisis, but fear of the “R” word has become the “boogieman” of the real estate economy. And who can blame the real estate industry’s concerns? We have seen a significant mortgage rate decline over the past year, and that usually occurs when the economy is weak rather than like now when unemployment has remained crazy-low, below 4%.

One of the reasons that rates are falling is because the Fed is trying to offset the economic damage created by the ongoing trade war and its uncertainty. This confluence of events has impacted real estate in the high-cost markets I analyze in my research by slowing sales despite falling mortgage rates. Here’s a variation of a checklist I’ve shared before.

The following is a diagram of the trade war that is driving economic uncertainty and explains why lower mortgage rates aren’t as much impact as one would expect. Click the tweet to expand the infographic:

The best description using a baseball analogy I’ve heard (can’t recall the source – likely on Twitter or heard in a podcast). Here’s how the conversation goes:

oh, oops. Should be renters, own with a mortgage and own free and clear pic.twitter.com/ADkl1OGxse

The Real Estate Valuation Committee within NAR, which includes a slew of some of the best practicing appraiser minds in the industry, came out with a position on bifurcation. The release speaks to NAR’s support of independent valuation by state-credentialed appraisers, which is great. And it states that the appraiser must be able to interact directly with a third-party property data collector (inspector), which is also great.

Presumably, the inspector could be a Realtor since NAR is a trade group for Realtors, not for appraisers. Thankfully NAR recognizes that the detachment of appraisers from the process may damage their members’ livelihood as well as hurt home buyers and sellers. It’s great to have NAR in the mix, and they have long supported the importance of our role.

As much as I appreciate the symbolism of this policy position and the hard work by this committee, it is not clear to me how it makes much of a difference in the ultimate use of bifurcation assignments by mortgage lenders. Presumably, if views change with the future of the pilot programs at the GSEs, the use of bifurcation appraisals won’t be stopped. Still, I see their efforts as very important.

But I don’t want our industry to think: “There, we’ve addressed and resolved the threat to appraisers and more importantly, the public trust.” 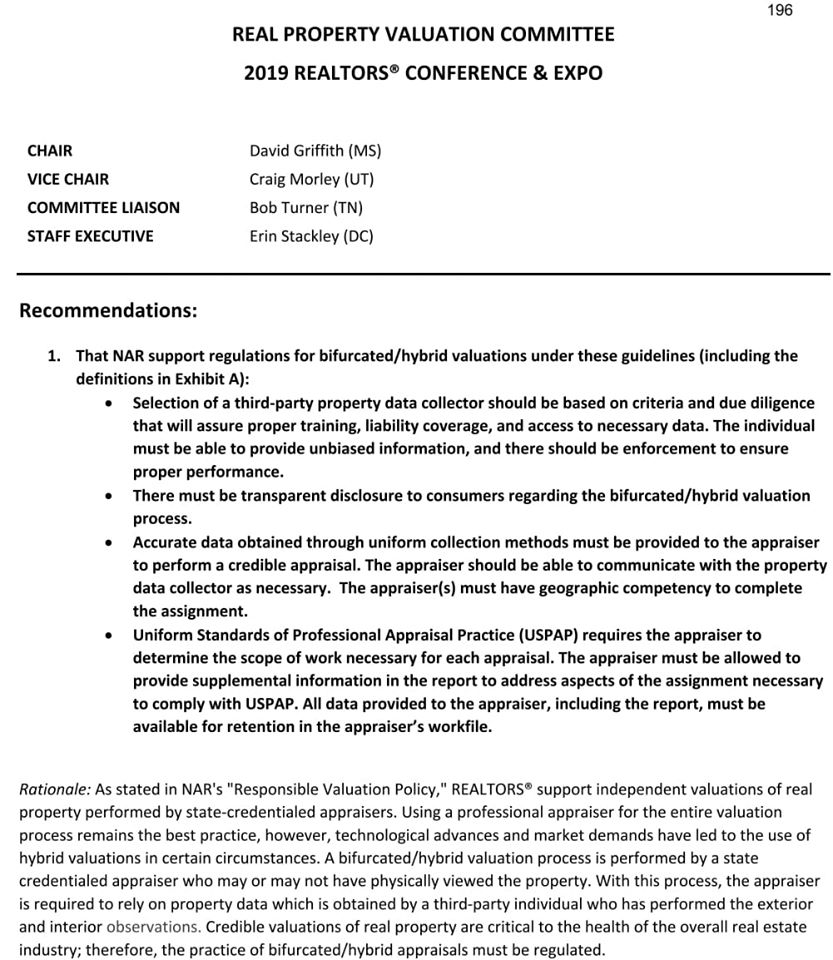 My friend Jamie Owen of the Cleveland Appraisal Blog has a new podcast that you can add to your feed. It gets into the nuts and bolts of our profession yet keeps it interesting and has high-quality production values. Here is the latest episode:

The egg is the trade war, gum is national debt, coke is the Fed, and fish are the bears.