Even though I essentially retired from golf several decades ago, I’d just say “Yeah, I planned to do that.”

It's been a year since Jon Rahm hit this hole-in-one after skipping it off the water and we're still in awe ????

Oh, and real estate firm Douglas Elliman is spinning off from their parent company, Vector Group into a stand-alone firm through an IPO. Here’s the presentation deck in public domain and the story from Bloomberg, who broke the news.

I was somewhat caught off guard this week by the significant interest in the NYC rental market this month. By 9am yesterday, the coverage of the report ranked 8th most read by their 350K subscribers.

The Bloomberg piece included one of the coolest charts I’ve seen in a while. Now THAT is some series pandemic distortion! 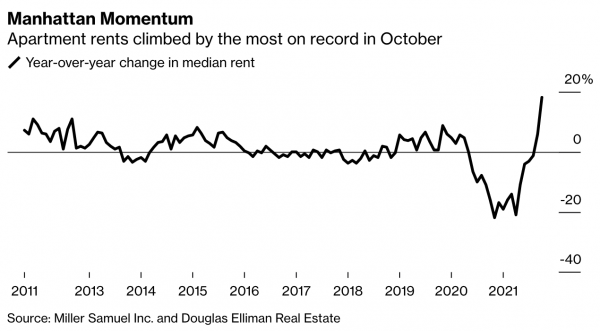 “Net effective median rent surged to the levels seen in the same period two years ago.” 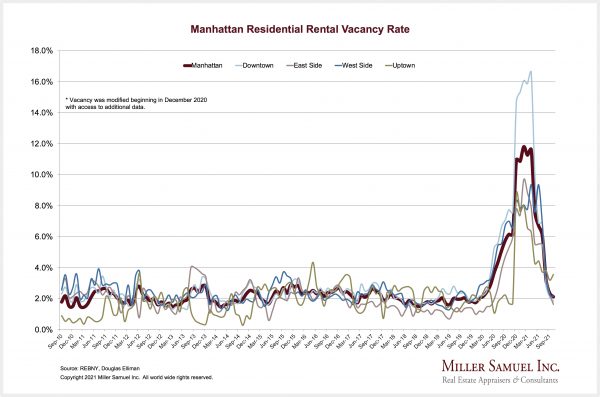 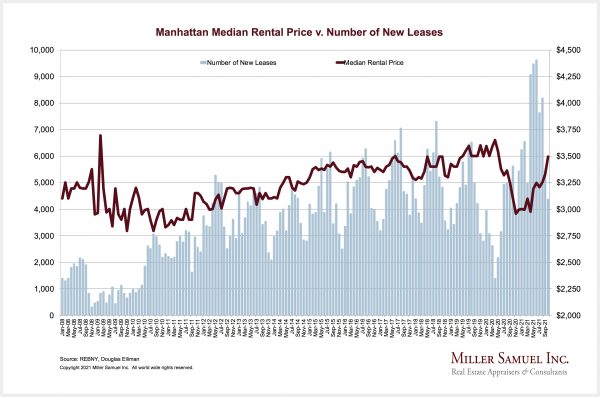 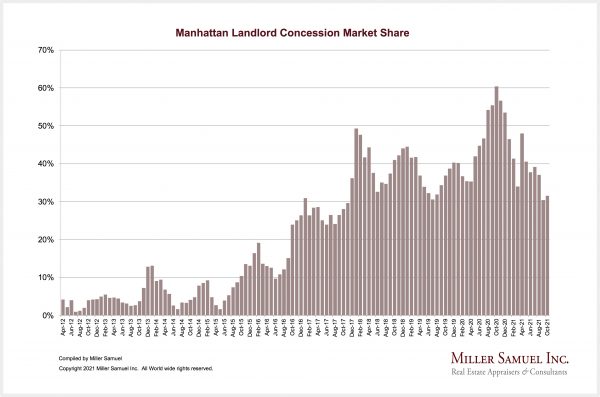 “October saw the highest number of new lease signings for that month since tracking began in 2008.” 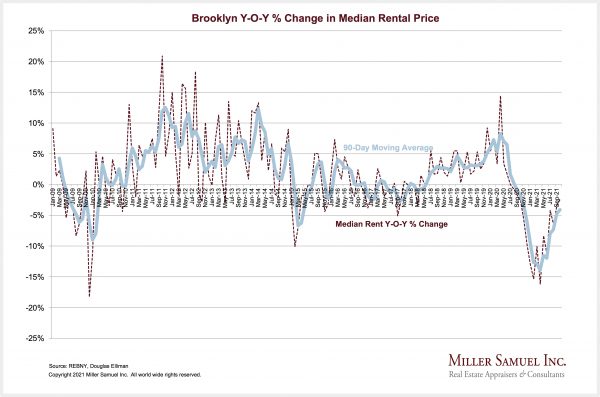 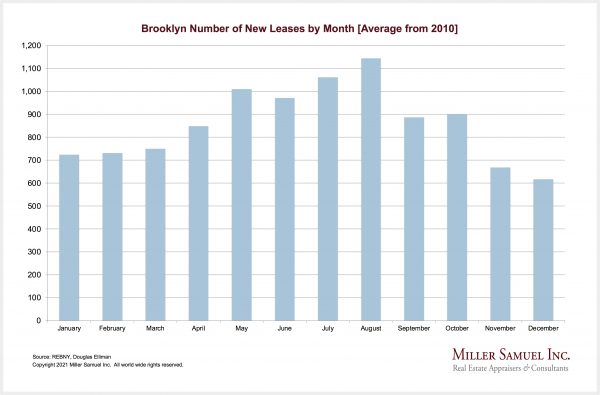 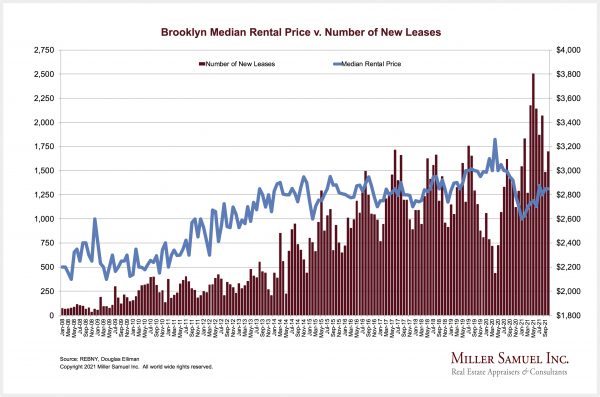 [Northwest Region]
“October saw the highest number of new lease signings for that month since tracking began in 2011.” 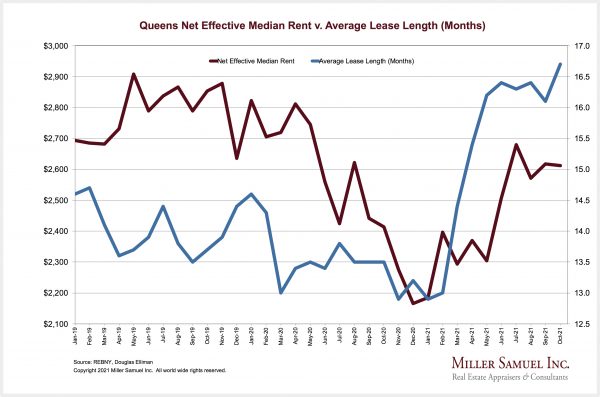 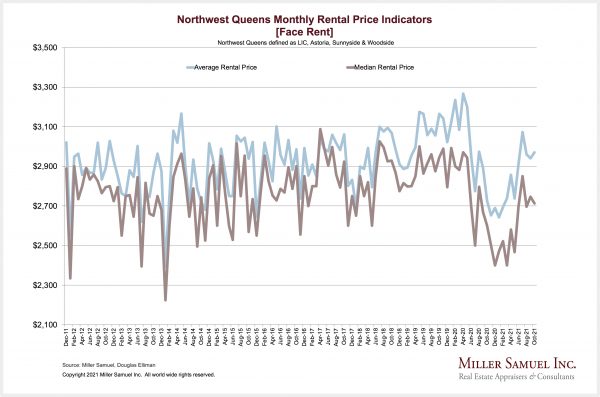 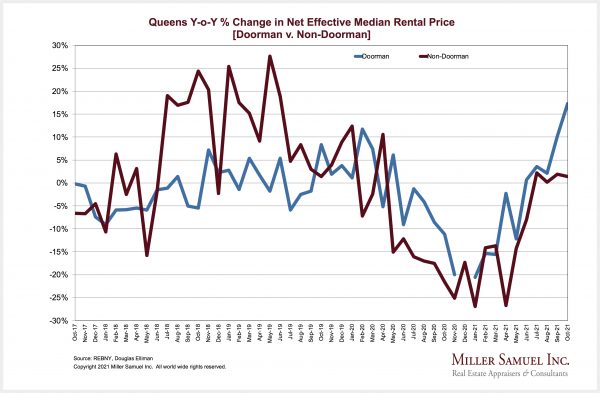 This is an interesting take and it was cool to get a shout out with the chief economists for CoreLogic and Moody’s Analytics and the Executive Director of the NYU/Furman Center. The actual article gives more information on the topic.

“And the rent growth we are seeing now is just much sharper than anything we’ve recorded previously,” Nothaft said.

An appraiser colleague of mine in California heard my voice while driving and let me know the clip aired. No, he didn’t crash.

Ok, it was not a smackdown. But I did have a fun and informative discussion with my friends Noah Rosenblatt and John Walkup of Urbandigs about the New York housing market backed up by data. The discussion was moderated by the very adept Phil Horigan of Leasebreak.com. Take notes!

‘It’s Not Easy: Yale Versus Columbia On Pricing, Sort Of

I had a fun discussion on the topic of pricing with Dr. Rob Docters who teaches ‘pricing’ at Yale. Hey, I teach market analysis at Columbia so we can claim this was an Ivy League debate, right? The venue was the Boroughs & ‘Burbs Podcast with its two very engaging hosts, Roberto Cabrera and John Engel of real estate brokerage Brown Harris Stevens.

“The Trend Is Your Friend…Until It Ends” Gets An Upgrade

This Noah Smith Substack post The Metaverse and (near-)infinite economic growth is a bit off-topic for these Housing Notes, but hey, I get to decide what I write about.

What hooked me in to this interesting read was the quote below this chart: 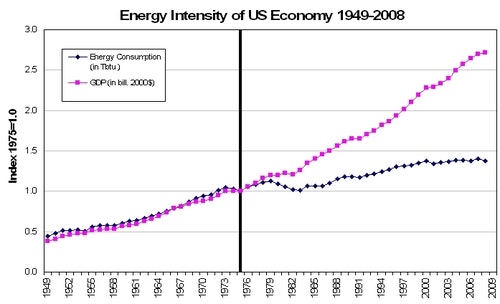 If you were sitting in 1970, you could look at this curve and claim, very confidently, that economic growth requires concomitant increases in energy use. And you’d be wrong. Because the trend is your friend til the bend at the end.

Throughout my life, the common refrain was “The trend is your friend.” But I modified it years ago, adding, “..until it ends.”

As in “The trend is your friend…until it ends.” which always got a chuckle during presentations.

But now I need to modify it to:

“The trend is your friend…until the bend at the end.”

Brilliant. For a deeper explanation.

A few weeks ago I had spoke to just over 800 real estate agents who are part of CREB and members of Metrolist in California. It went so well, they want me to do this again early next year. Interestingly, I didn’t rely on PowerPoint because I wanted the presentation to be engaging and spent some time explaining the fallacies of the Zestimate, in a way that you might not have heard before. And shortly after (and not because!), Zillow Offers imploded because they overpaid for thousands of properties.

Despite The Recent Concern About Rising Mortgage Rates, They Drop Below 3% Again 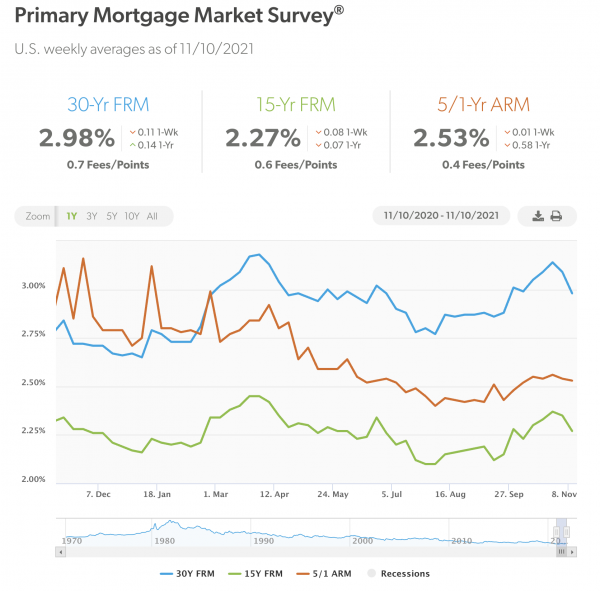 Mike DelPrete: How Data Can Be Used to Mislead: Compass

Mike DelPrete has a fascinating free newsletter I encourage all my readers to subscribe to.

His recent newsletter: How Data Can Be Used to Mislead: Compass’ Results Told Three Ways

YOY results – How Compass presented – yet 2020 was distorted. I saw this graphic all over social media. 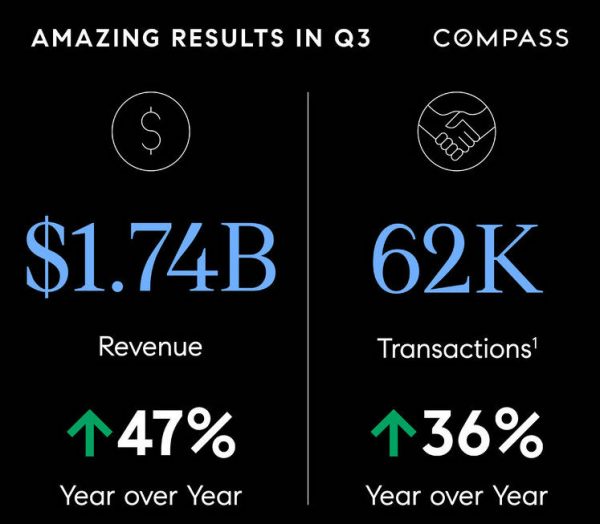 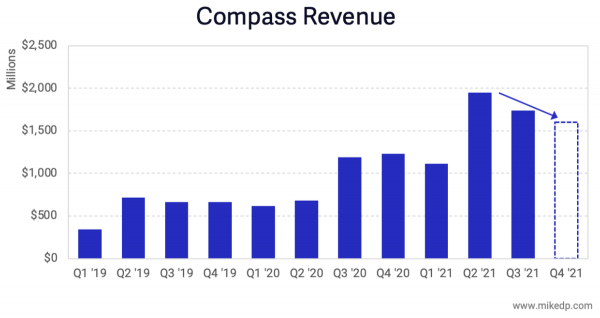 Revenue is up annually as are its peers. 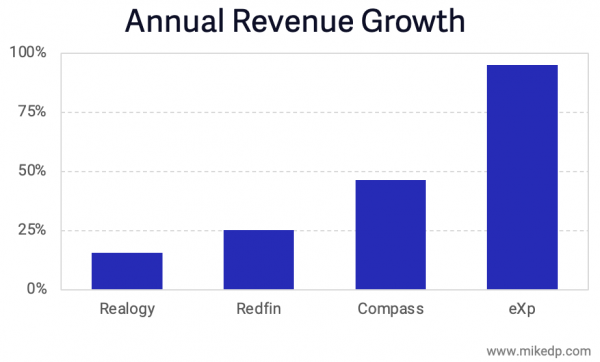 Revenue is down more than its peers by recent quarter 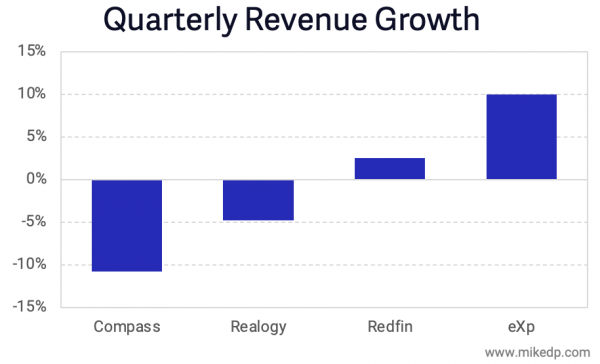 Profits are still nonexistent, unlike its peers. 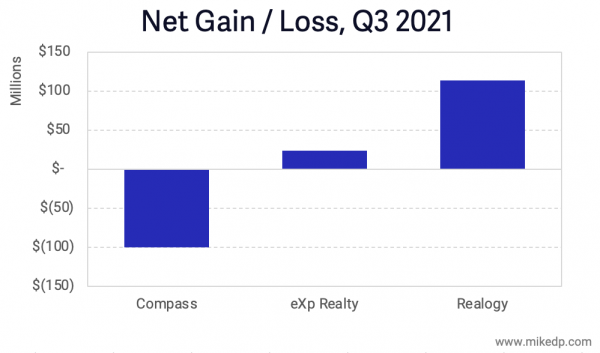 I really loved Mike’s insightful context on this topic.

Round Beds Didn’t Hold Up Well

The round bed located in the center of the primary bedroom seemed to be an aspirational accessory of the 1960s and early 70s, but it went the way of orange deep-pile shag carpeting.

From the CRE webinar landing page…

Supply chain logistics are at the epicenter of what makes the economy function, and commercial real estate is the field on which it all plays out. On November 18, The Counselors of Real Estate presents “The Logistics Industry: Damn the Torpedoes. Full Integration Ahead!” Moderated by Franc J. Pigna, CRE, this topical and newsworthy presentation will feature Nate Asplund, Beth Branch, and Martin Dixon who’ll provide a global perspective on the shipping industry and answer key questions such as:

My favorite chart of the week made by us 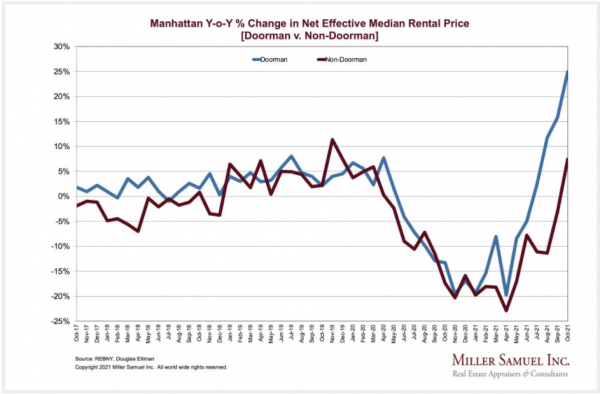 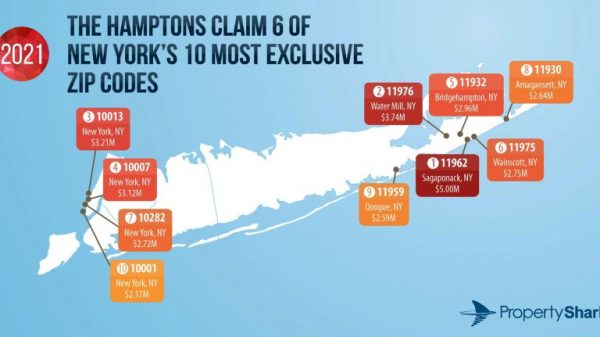 Buyers being forced to make snap decisions about where to live and what to purchase given supply-constrained housing market… between July 2020-June 2021, home sales sat on market for median period of 1 week before entering contract
⁦@WSJ⁩ ⁦@nardotrealtor⁩ pic.twitter.com/wYKAuJT7PF 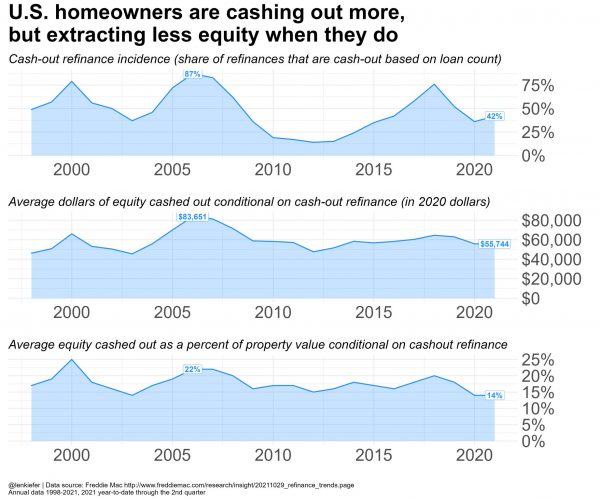 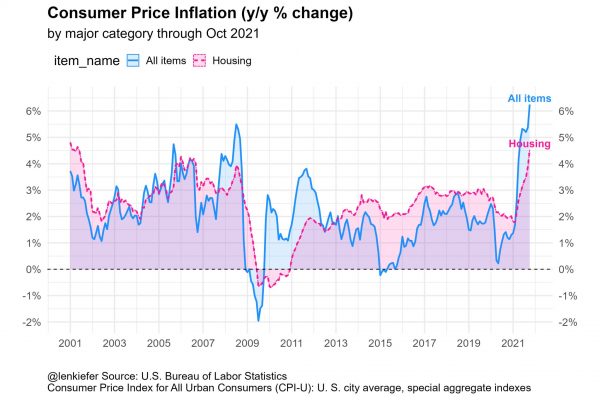 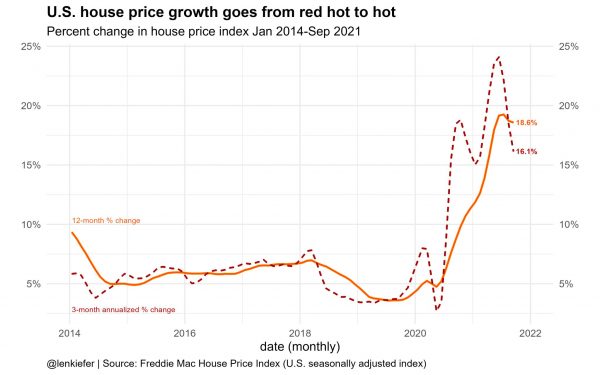 The Appraisal Subcommittee held an event this week called “ASC 2021 Roundtable: Building a More Equitable Appraisal System” which was actually a useful exercise in reaching out to the appraisal community for input. I actually enjoyed listening to the event. The chat board was full of insights and the host would pull people onto video to discuss the point they made.

The TAF white paper (The irony of calling this a ‘white’ paper is not lost on me):

The Does Appraiser and Borrower Race Affect Valuation? [SSRN free after registration]

This paper represents TAF’s effort to counter the Brookings Institute report. Dr. Perry’s report for Brookings did not connect the dots between the appraisal industry and why properties in locations dominated by people of color often had housing prices that were lower than areas that did not. Dr. Perry conveyed the incorrect point that appraisers ‘set” prices when we simply ‘reflect’ prices.

Following concerns about undervaluation of minority-owned homes, we examine the incidence of racial appraisal bias using a nationwide sample of refinanced mortgages from 2000 to 2007. A unique feature of our data is that they allow us to observe the race of the both the homeowner and the appraiser. We do not observe large, systematic differences in the ratio of appraised values to automated valuation model (AVM) estimates between Black- and White-owned homes. Moreover, the appraiser’s race and its interaction with the owner’s race are not related to valuations. Our findings suggest that racial appraisal bias is either uncommon in the mortgage refinance market or has a relatively minor effect on valuations, on average.

The translation of the abstract is as follows:

They compared mortgage appraisal results and found that because appraisals didn’t vary from AVMs, it’s just a hop skip and a jump to say appraisers are not biased since AVMs are machines (that were created by humans BTW). Is there bias in most industries? Of course. The problem with the TAF approach is that, as we saw last week by Zillow Offers, AVMs are terrible and the scourge of the appraisal industry. They are quantitative approaches to valuation and have their role in some subsets of valuation, not qualitative, and therefore have less accuracy. So as far as I’m concerned this white paper shows us nothing tangible about the industry.

The use of AVMs also places them on a pedestal above appraisers themselves, yet they are wildly inaccurate. This white paper’s premise damages the appraisal industry, something TAF is supposed to strengthen in order to maintain public trust.

C’mon Dave, you need to be aware of the other challenges appraisers are facing. Being replaced by AVMs is certainly one of the issues our industry is concerned about.

And one more thing, 96.5% of the appraisal industry is white. We are the least diverse industry out of 400 tracked by the BBL. Does a white paper like this remove that optic from the public?

From The Chrisman Commentary (Rob is a mortgage broker but an essential source of information on the mortgage industry). You can subscribe here.

From Appraisals are near the top of any list of current lender and borrower complaints about the processing of mortgages.

This week I received this note from Mike Simmons, Co-President of AXIS AMC. “I’ve heard of something overhanging the appraisal industry. Namely, that appraisers are ghosting (abandoning) orders and are beyond accountability. Part of my responsibility at AXIS Appraisal Management Solutions is to attend lender conferences and talk about the appraisal industry, and addressing difficult topics centered around our industry. Despite the enjoyment of being together again in person, this year the energy at all the conferences felt more negative than usual. The voices were louder, and different. Not so much over new issues, because the issues really aren’t new, but there’s more anger now. And some of us in our industry share that frustration…

“I want to clarify something: while the issue causing most of the heartburn only involves a small percentage of appraisers, it’s spreading and eroding the public’s trust in all appraisers. The goal is to find ways to change the behavior of those few outliers that are causing all the noise.

“What some Regulators didn’t recognize, is that telling an AMC that it’s their choice not to engage an appraiser who has abandoned an order, or failed to deliver a report anywhere near an agreed upon timeline and without explanation, doesn’t constitute a solution. That policy will have no impact on that same appraiser getting orders from any of 100, or 200, or 300 other AMCs in that State and repeating that same behavior. Ok, so what. The ‘what’ is that failing to meet a contractual deadline, in a worst case, can cause a borrower (and Real Estate Agent & Mortgage Lender) to lose a purchase transaction.

I stumbled across the The Real Deal’s 2012 documentary ‘Building Stories‘ that chronicled the life of the prolific architect Costas Kondylis. It was produced by The Real Deal founder Amir Korangy. I had watched it when it was released a decade ago and I enjoyed watching it again recently.

Costas Kondylis is responsible for not only the way Manhattan looks today, but also for developing the basis of how New York City will look in the future. He has built thousands of buildings all over the Greater New York Area and the world, 86 of which are in Manhattan. The Real Deal produced this film in 2012 documenting the work and life of this legendary architect. 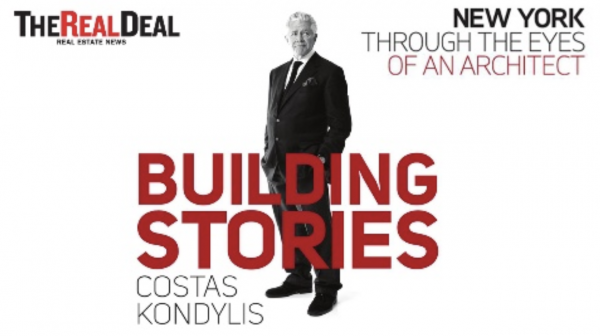