Unexpected Milestones and Their Impact on Housing

Since there hasn’t been much going on this week, I thought it was a good time to go to Beijing and Shanghai. For the former point, I’m kidding. For the latter point, it absolutely is. I have to keep this short or I’ll miss my plan this morning. 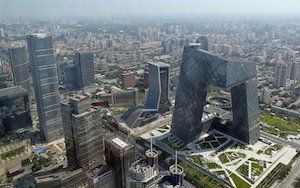 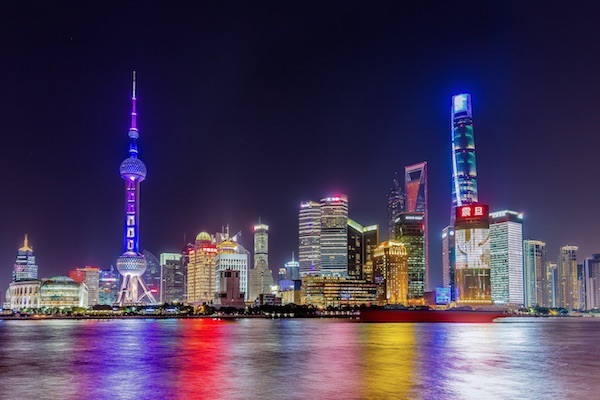 The U.S. election ended up with an unexpected victor in what was the most acrimonious campaign of the modern era. No substantive economic policy was debated although the general platforms were laid out on each candidate’s web site. In the aftermath, we learned that polls are not what you think they are – a stock market-like ticker of the value of each candidate.

Polls remain a bit too primitive to rely on at this point and sadly, they seem to be crowd sourcing the voting process. I would guess that most voters don’t venture into the policy weeds and many of them take comfort in voting for who looks to be winning. This thinking has crept into other areas where we accept lower reliability as fact. Take voting on anything on Twitter and other social median platforms. The voters are in your tribe so they probably reflect your views. You picked them for their friendship, politics, relationships, religion, sports team, school, city etc.

As an appraiser, we see this with the banking industry moving towards automated valuations (AVMs). Web sites like Zillow tout Zestimates which can be very accurate or very inaccurate, but the user doesn’t know when. Two incorrect thoughts come to mind:

The LA Times poll was always the outlier during the election and often ridiculed but they were the only one that was accurate in hindsight. We don’t know if it was luck or a better method but it will be examined. Even my stat data zen god hero Nate Silver, who called the 2012 election with nearly perfect accuracy was off in both the primaries and the final race to the presidency.

Clinton won the cities and Trump won everywhere else. We don’t yet know how this will impact the housing market, good, bad or neutral. At this point I’m leaning towards neutral or even some positive impact. I wrote a little about this on election day in my blog post: Housing and the Election Aftermath.

In the late 1990s deregulation act known as Gramm-Leach-Bliley that allowed Wall Street investment banks to play in the sandbox of commercial banks and vice versa. We ended up with the financial crisis. I’m not suggesting we are headed there again, but human beings run corporations and institutions and they always figure out a way to screw things up.

As I said in my election post, I think all of this is probably neutral or beneficial to the housing market and it is important to separate social policy from economic policy to see that. At this early point after an election we don’t really know whether campaign platforms will be followed and whether most or any election promises will be kept.

Douglas Elliman published our October research on the rental markets 3 of the 5 New York City boroughs. I’ve been authoring the expanding Elliman Report series for the past 22 years. The prevailing theme for this rental report was rising landlord concessions especially more skewed to the high end of the market where price trends are the weakest.

Before I get into the results, it is more fun (for me) to know that the Bloomberg article covering the rental report results was the number 1 read article on Bloomberg terminals world wide. More so than the election!

And a chart on rising landlord concessions. 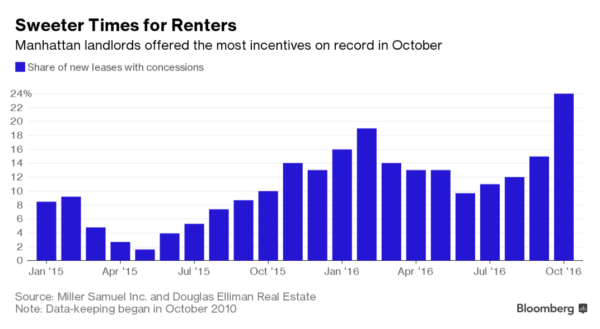 While landlords are working hard to protect the face rent by offering a record amount of concessions, skewed towards new development and the high end of the market. The rental market remains soft at the top because that is where new development has been targeted.

MANHATTAN Manhattan median rental price growth remained nominal as inventory expanded and the market share of concessions set a new record. Median rental price edged nominally higher after slipping in the prior month on a year over year basis, up 0.3% to $3,400. Average sales price increased 3.1% to $4,223 over the same period. Median rent growth was largest in the entry tier of the market, rising 4% from the prior year period. 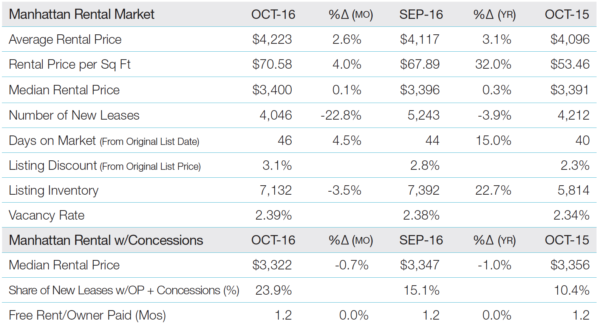 QUEENS Rental price trend indicators for Northwest Queens, including the neighborhoods of Long Island City, Astoria, Sunnyside and Woodside, moved higher than year ago levels, yet the pattern year to date has been mixed. Median rental price jumped 12.9% to $2,900 while average rental price expanded 1.6% to $2,986 respectively from the year ago period. In addition, the luxury median rental price, representing the top 10% of the market, increased 7.5% to $4,850 over the same period. Listing inventory growth far outpaced the number of new leases signed…

The Joy of Homeownership

As a new empty-nester, this hit home (pun intended).

Today my wife and I are flying to Beijing to see the Great Wall, the Forbidden City and of course, smog. After a week of tourist stuff, we are headed by high speed rail to Shanghai to attend and participate in the Real Deal’s Shanghai Real Estate conference. We attended last year and it was amazing. This year I am looking forward to understanding how Chinese investors view U.S. real estate and the opportunities it presents. I’ll share more of that in future Housing Notes when I return.

As I learned last year, you need a VPN app to get through the Great Firewall of China. 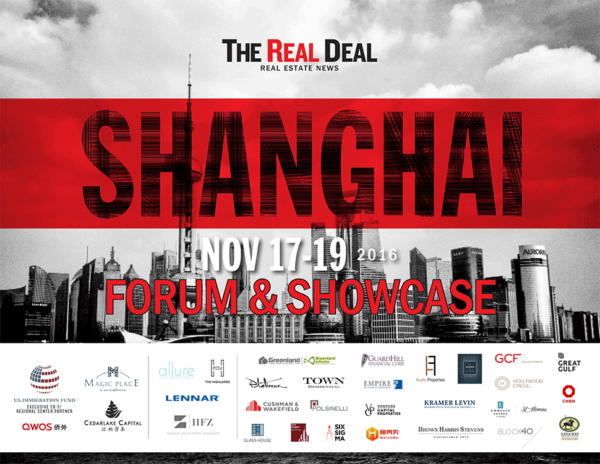 RAC is already hard at work planning for next year’s conference – about a year from now. We’ll feed you the information as it is nailed down. We had great success last year providing relevant programs and as this President, I am very excited about the coming year.

The biggest issue of the week – election excluded – was the announcement by Freddie Mac that certain types of appraisal-free mortgages are in the works.

Sorry to cut it short, I’ll elaborate on the Freddie Mac story next week from Shanghai and listen to the next installment of Voice of Appraisal. I need to catch my plane!

If you need something rock solid in your life (particularly on Friday afternoons) and someone forwarded this to you, sign up here for these weekly Housing Notes. And be sure to share with a friend or colleague if you enjoy them. They’ll get in an Uber with the “You’ve got mail” guy, they’ll go all mannequin on you and I’ll share the most bizarre headline of the week.