After seeing the following map, I’m thinking about moving back to Maryland where I grew up. Perhaps I should consider Montana and Kentucky for an improved quality of life as evidenced by state candy selections. Both my office in NYC and my home in Connecticut had a trick or treat candy bowl loaded with Reese’s, KitKats and M&Ms. Not a Milk Dud, Swedish Fish or Tootsie Roll Pop in sight! Oh, the humanity of it all.

Two Bed or Not To Bed – Manhattan Two-Beds Are Weakening

There was an epic New York Times cover story today on the two-bedroom market based on the historical data I’ve accumulated over the past 30 years It’s a Buyers’ Market for Two-Bedrooms.

With so much attention placed on the development of 3-bedrooms and 1-bedrooms, the once-dominant 2-bedroom seemed to fall out of favor or was simply overlooked. Now as price trends soften, they are looking more compelling these days. 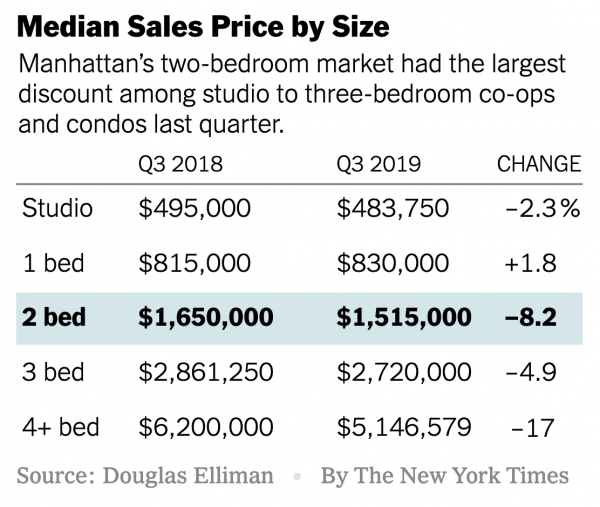 Here is a chart I whipped up that shows the YOY% change in 2-bedroom median sales price since the financial crisis. It’s clearly a weakening market subset. 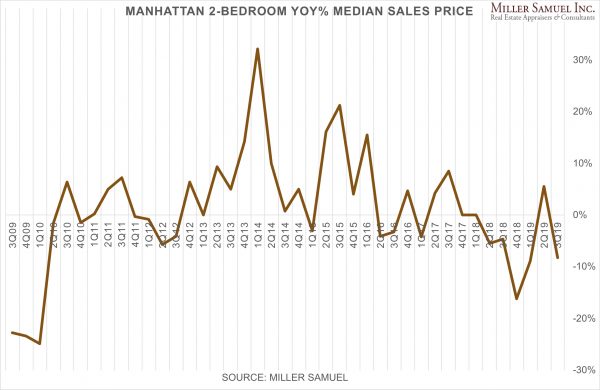 Here is a raw presentation of Manhattan co-ops/condos in the 3Q19 as compared to a year and 5 years ago (2-beds highlighted in yellow).

The $100 Million U.S. Residential Sales Market Is Still A Thing, Just Not As Big As Advertised

Back in 2014, I started to notice a pickup in press releases for $100+ million listings in the U.S. and so I began to collect closed residential sales at or above the $50 million threshold. On one hand, it is amazing how many sales there have been, but perhaps what is not so amazing, is how few there have been in the context of expectations that existed in 2014.

I think it is important to note that many of the spec listings that were placed on the market over the past 5 years, were like worth nowhere near their sky-high asking price. It was an ego-driven phenomenon on steroids where there was no shame in wildly overpricing a home.

The most recent victim of reality was the “Billionaire” spec home in Los Angeles that was priced at $250 million. The Wall Street Journal broke the story a week ago with an epic picture of the home in Once Asking $250 Million, America’s Onetime Priciest Home Sells For Less. The Real Deal LA followed up with a great dive into the story: “Billionaire” mansion sale is the latest fail in “ego pricing:” brokers. 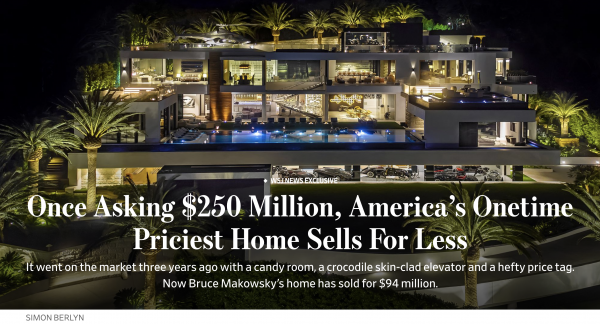 The home originally asked $250 million and was eventually sold more than two years later for $94 million, a 62.4% discount. It is not clear whether the $94 million was the price of the house itself since the listing touts about $30 million worth of antique motorcycles and cars. So, in theory, the house could have sold for $64 million, which even at that price, is still one heck of a lot of money.

But there are $100 million sales out there.

The Wall Street Journal has an epic analysis of $100 million U.S. home sales: The Super Rich Are Buying $100 Million Homes. For Some, One Isn’t Enough, based on the sales I have collected (note to self – I need a non-real estate hobby). 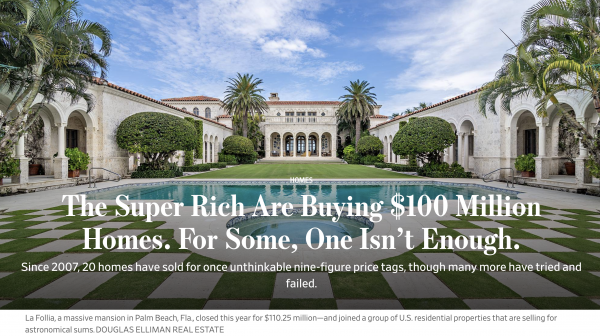 Using my list of sales at/or above $50 million, I whipped up a few charts that illustrate the phenomenon. I have dubbed the 2014 era “Peak Luxury.” My takeaway from this WSJ story is that while this $100 million market is not what it was, it is here to stay. 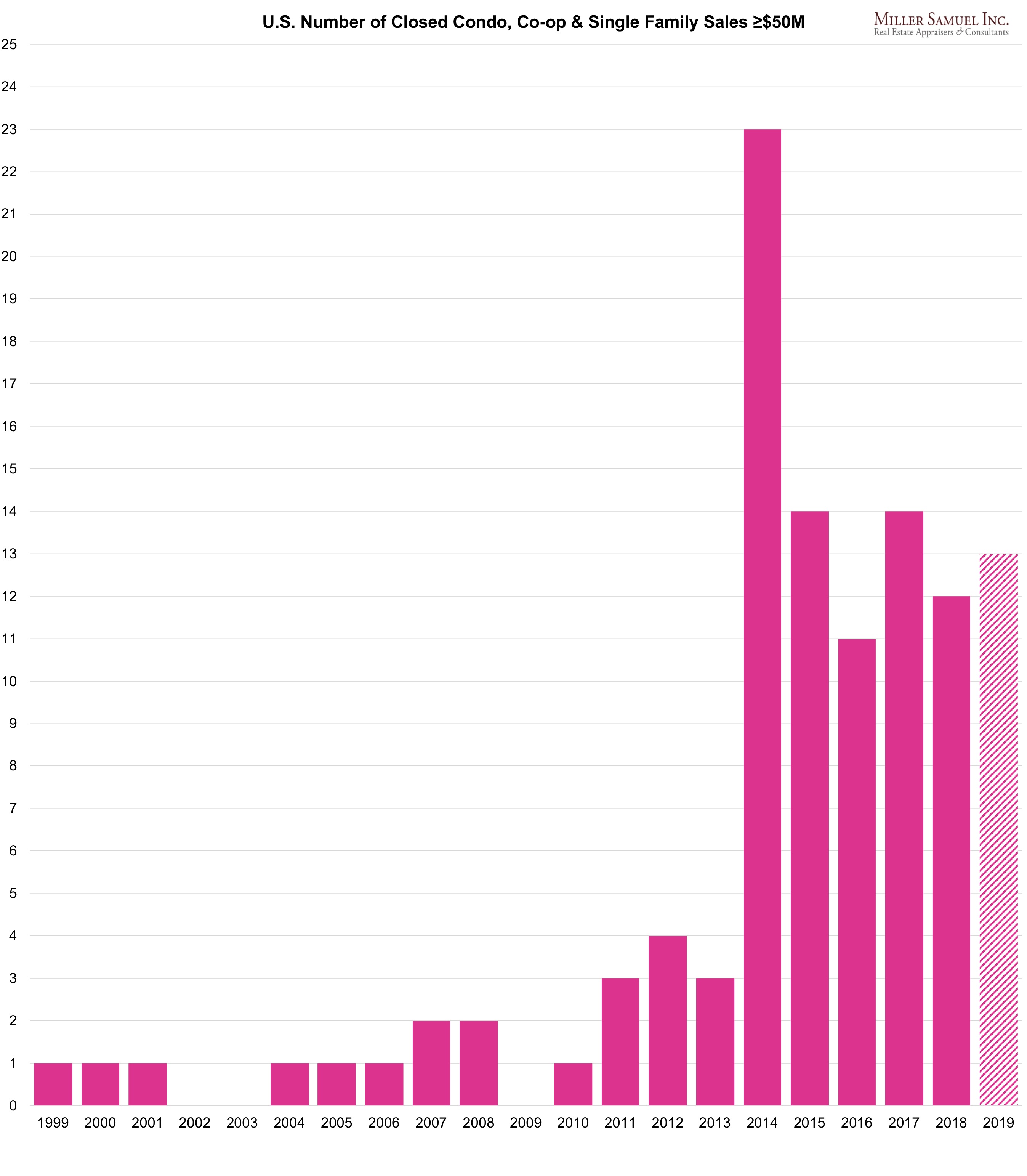 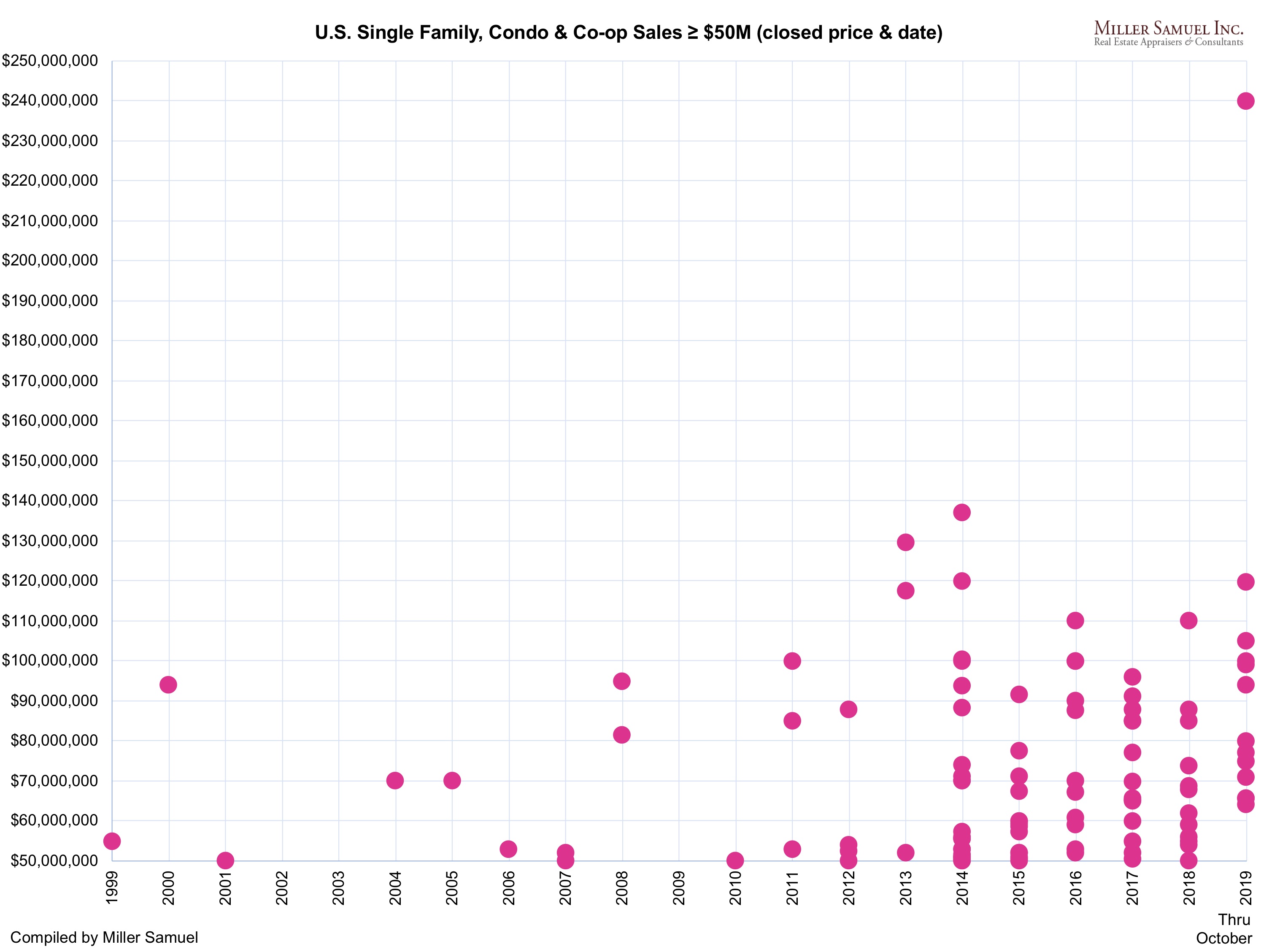 I thought this infographic from Freddie Mac was quite compelling and a bit damning to the future of U.S. single-family housing. 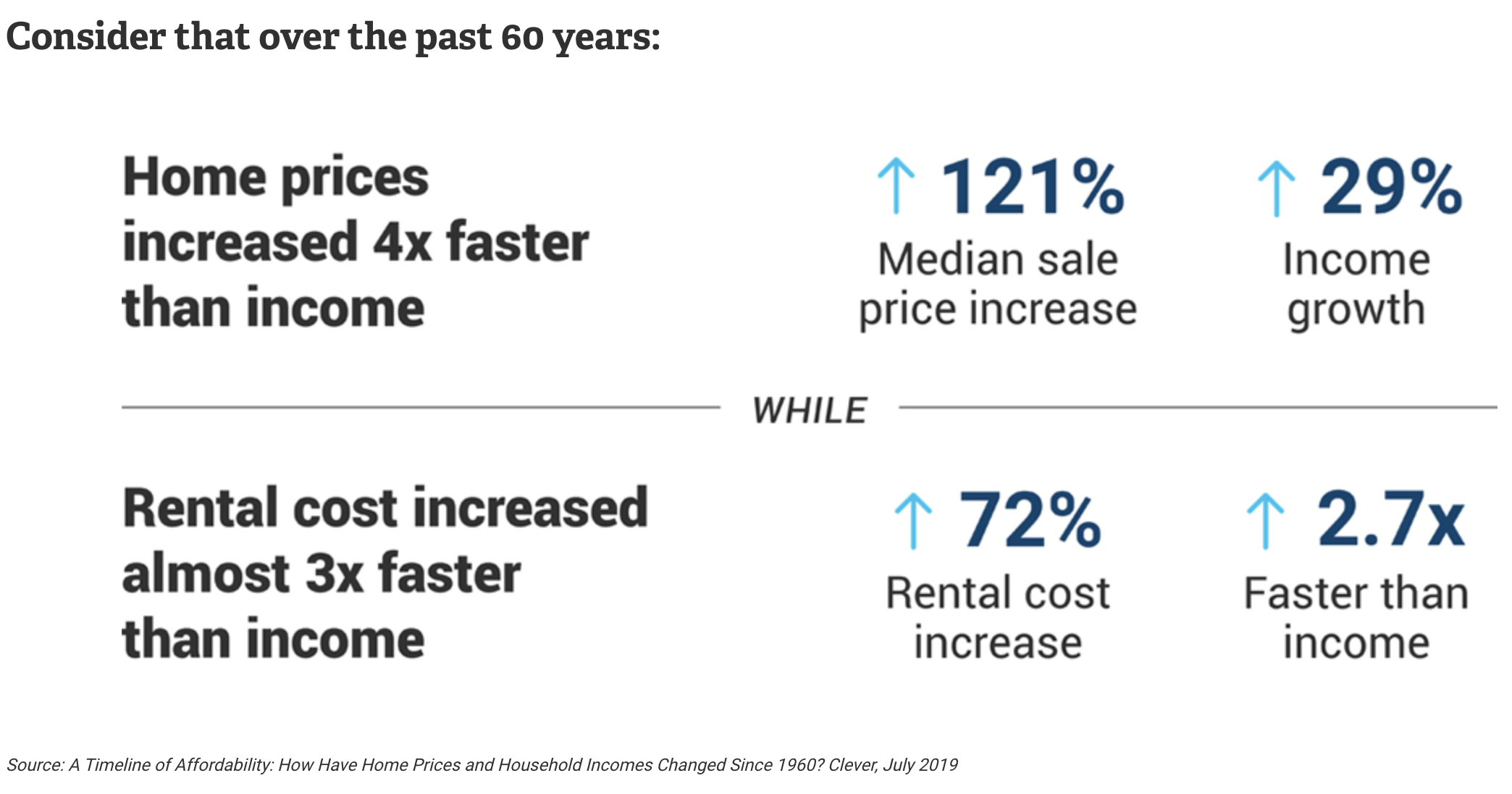 The Wall Street Journal did a fascinating analysis confirming what we already understood, using contract dates on Manhattan’s new development condos. Because of the obvious multi-year lag between contract signing date and eventual closing date when the building was completed, the market decline began earlier than seen in the hard closing data. However, the earlier declines were felt by market participants including myself, it just wasn’t apparent in the closed sales data. This is why I refer to 2014 as “Peak New Development” and “Peak Luxury.” And it is why the interpretive commentary in our Elliman market report series is just as important as the raw data itself. Here is a set of cool charts that were presented in the WSJ piece. 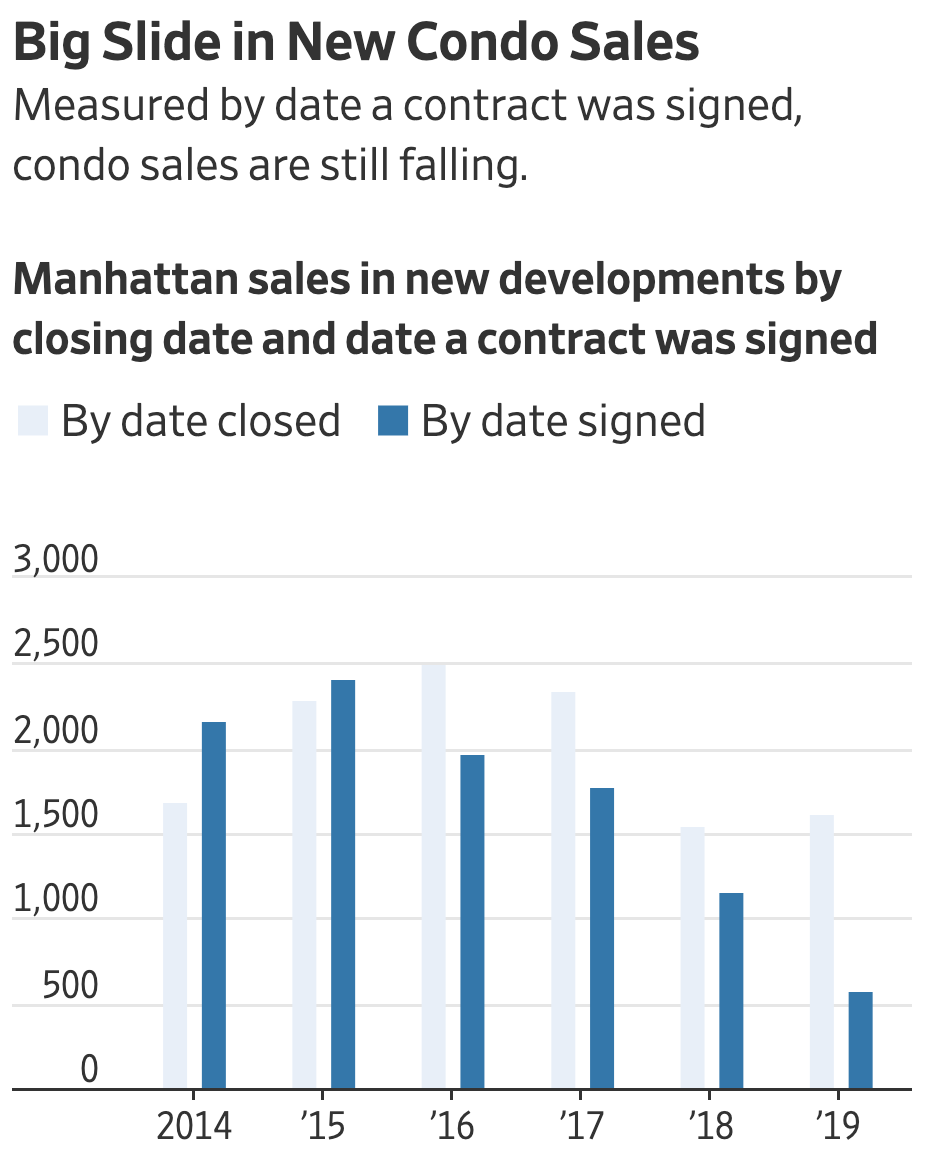 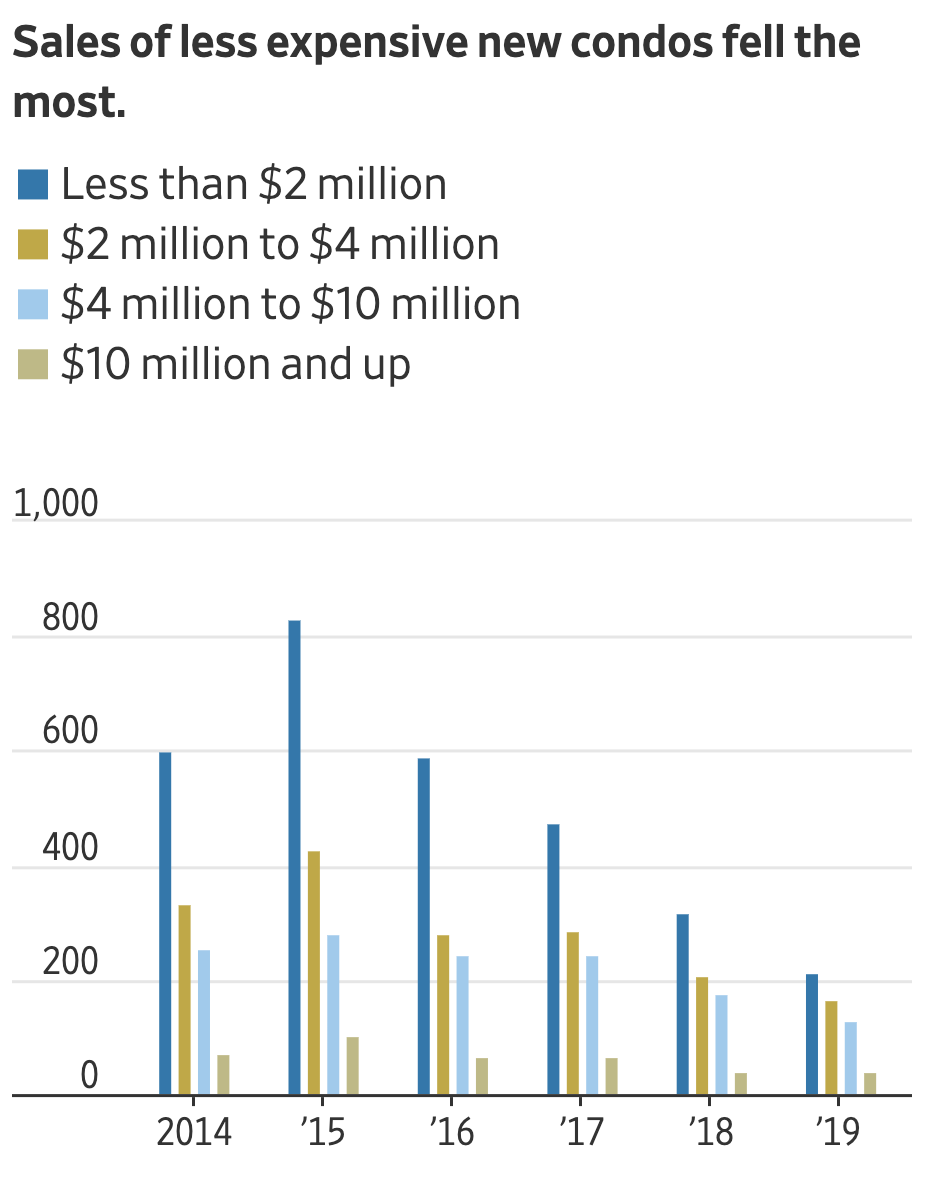 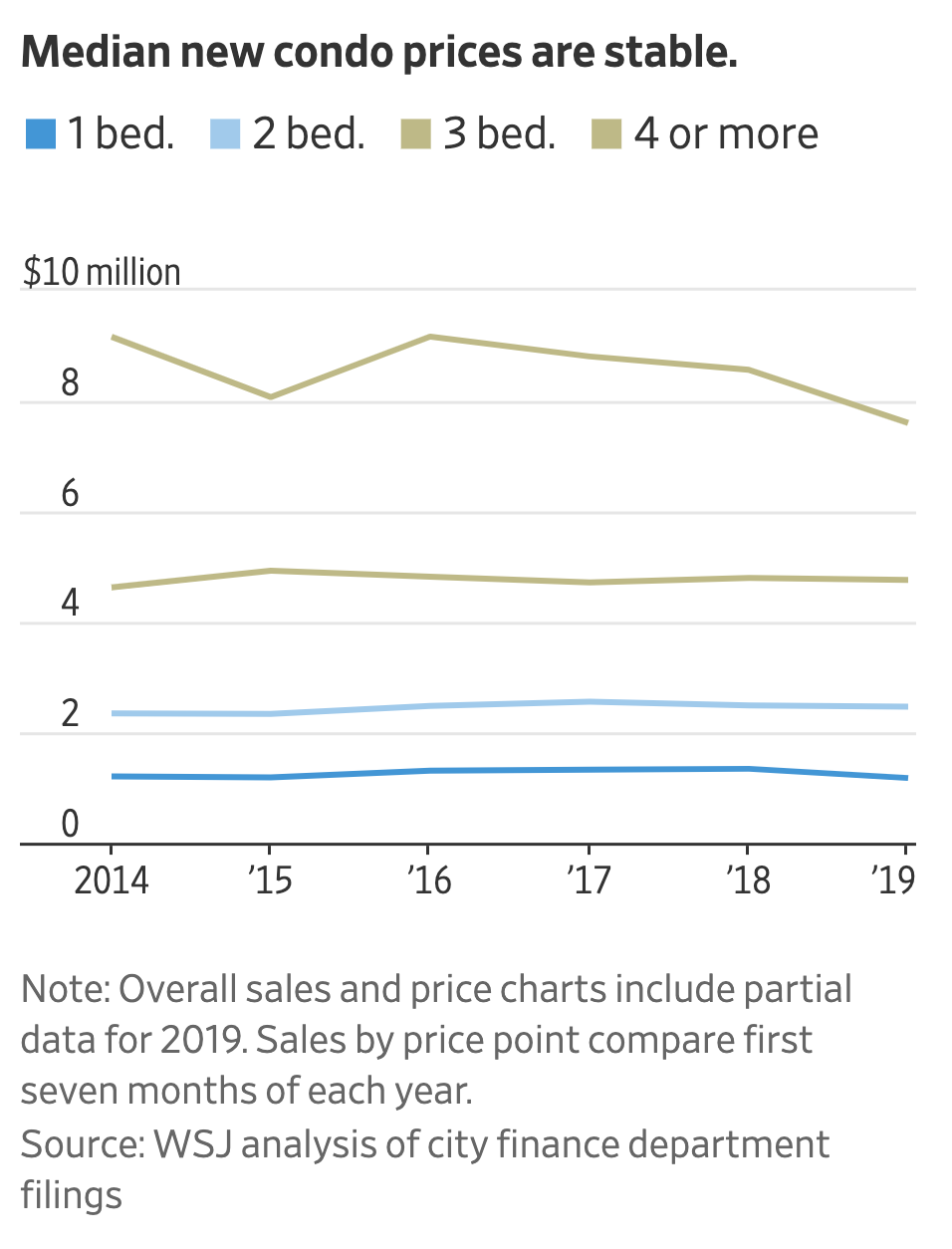 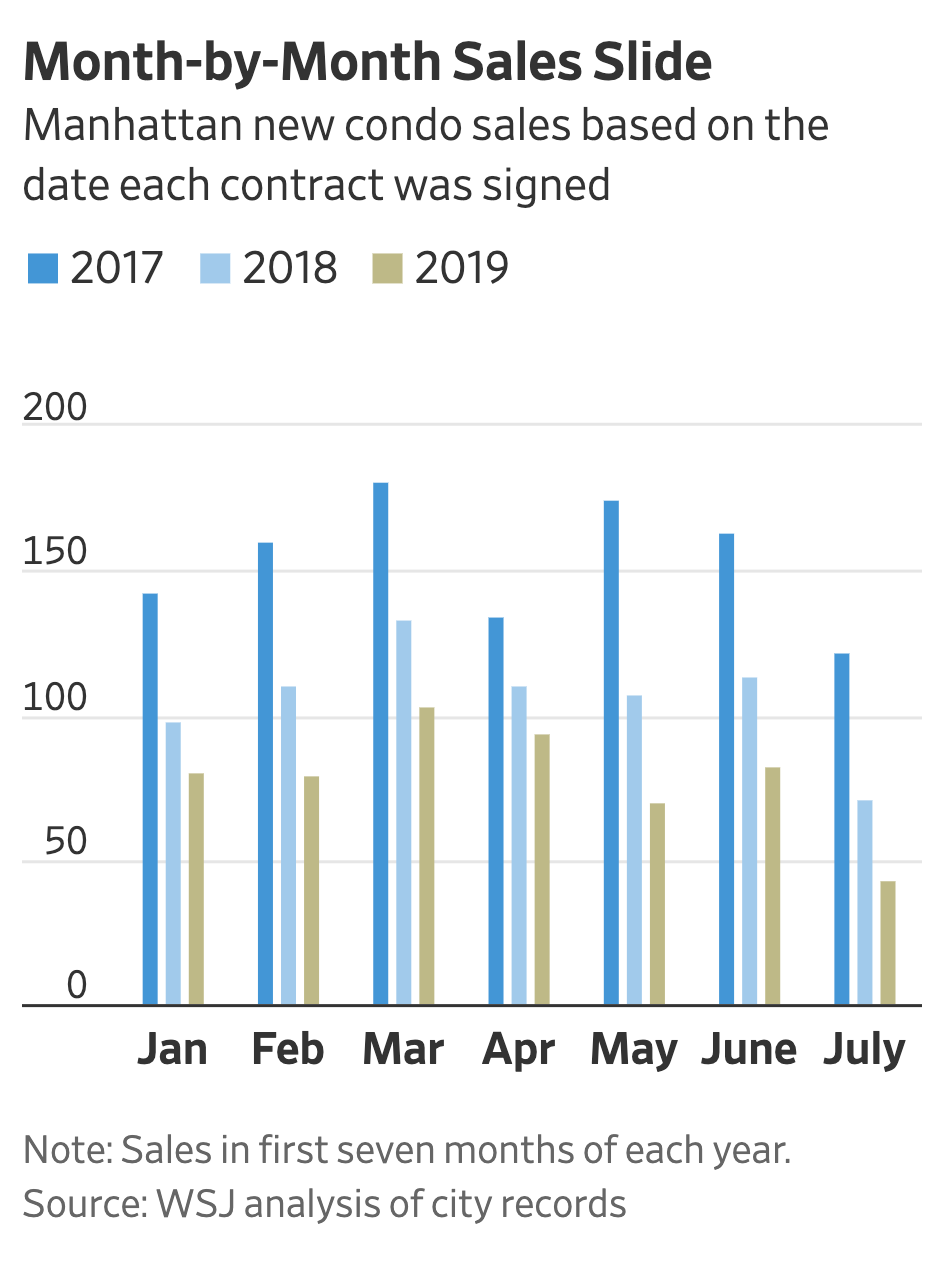 Compass, OYO & Opendoor. No real doom and gloom here, at least in the context of WeWork. 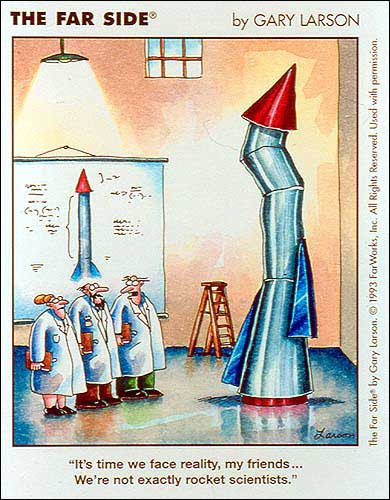 But sometimes, with all the regulatory and agency battles, it is treated as if it is. I’m not taking away from the skills that are required to be competent, but I tire of the constant drama being played out that has hijacked the profession from the professionals who are actually doing the work.

Shout out to my good friend and padre Tom who keeps me grounded – otherwise, I will think I’m Neil Armstrong every time my comps are good.

The Only Good Pilot Is A Dead Pilot?

Like my father always told me about having a business partner (see title above).

I have yet another independent confirmation that all GSE pilot programs are now dead under the new FHFA director. Fortunately for appraisers, his biggest concern is risk management and this action seems to confirm this. The GSE pilot programs designed to “improve” efficiencies, such as bifurcation (a spurious solution that is more costly, less timely and less accurate), are dead. Not everyone in the chain of command may be aware yet.

Every so often, I need to recalibrate my swearing. Going forward: “Fahrvergnugen” 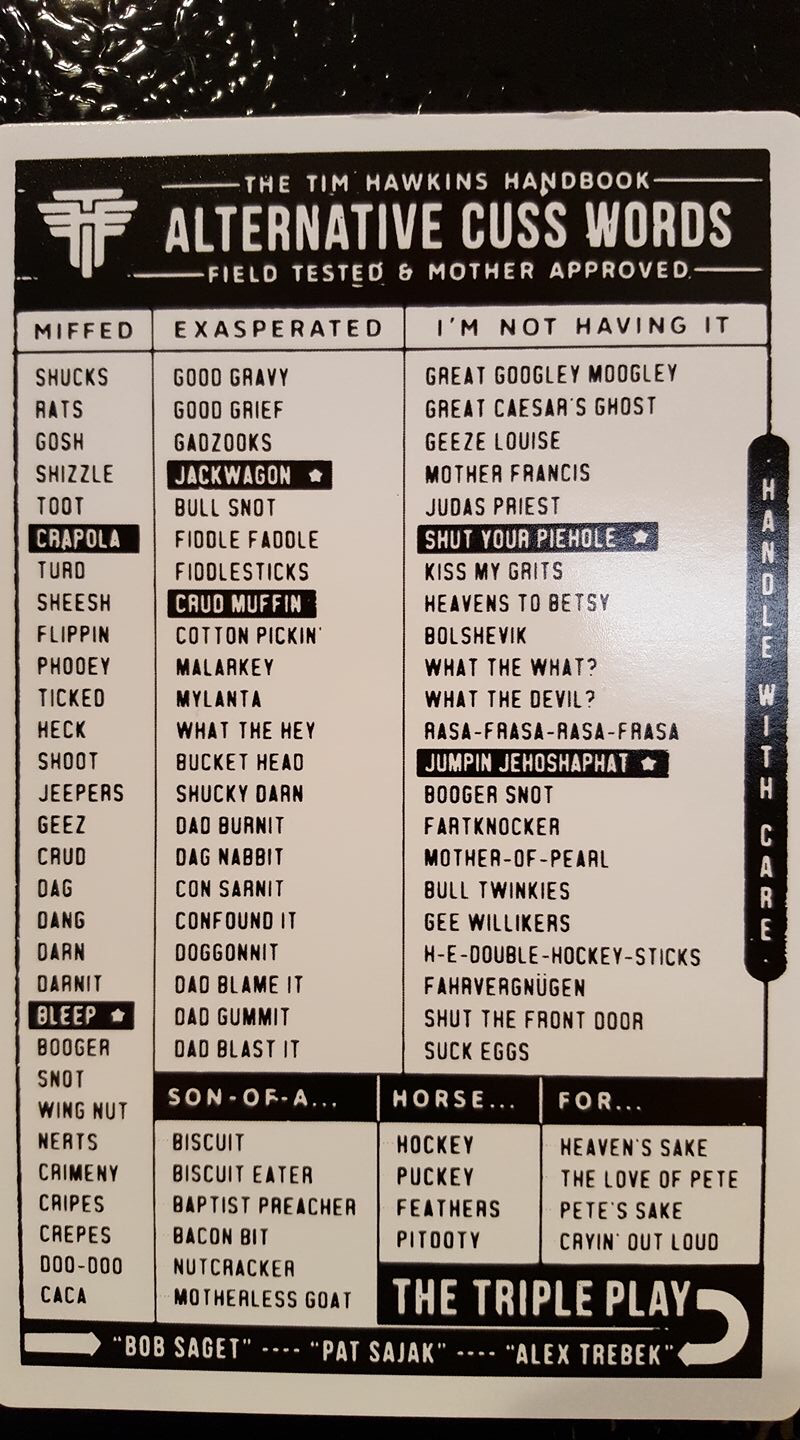