I saw this picture on Twitter (NSFW) this week and it brought back many memories. No, not from visiting my relatives’ homes in my youth, but from my six-month stint as a real estate agent in Chicagoland before I became an appraiser in New York City. I was driving to see a listing on the weekly broker tour day, listening to Dire Straits’ “Money for Nothing” on the FM radio, thinking how glad I was to be out of the hospital administration world, just having quit my job. I walked into the home to see all the yellow furniture covered in plastic. The picture also reminded me of a college friend’s home with blue plastic-covered furniture in the “shrine” called the “living room” that was carefully carpet-raked to expose any invasions by their children. 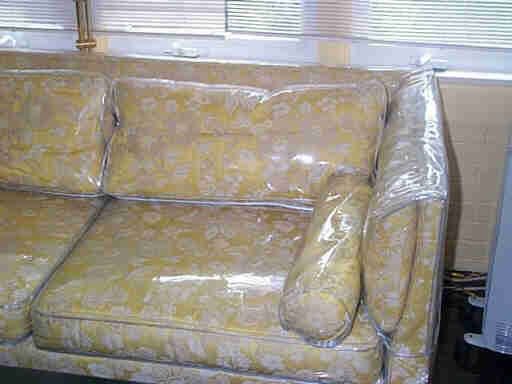 I suppose this photo is a deep metaphor for real estate transparency in some way but I leave that to you. I’m a bit under the weather today and am not at my creative best.

The Manhattan Market Dollars Skewed to Top of the Market

There is a cool graphic from the New York Times Calculator column by Michael Kolomatsky in this Sunday’s print edition of the Real Estate section that illustrates Manhattan’s dependence on high-end real estate. Using the data from a chart I began right after 9/11 and we continue to update, he illustrates this point:

Almost half the money spent by New York City home buyers in the first quarter of 2019 went toward the most expensive properties. That wasn’t always the case. 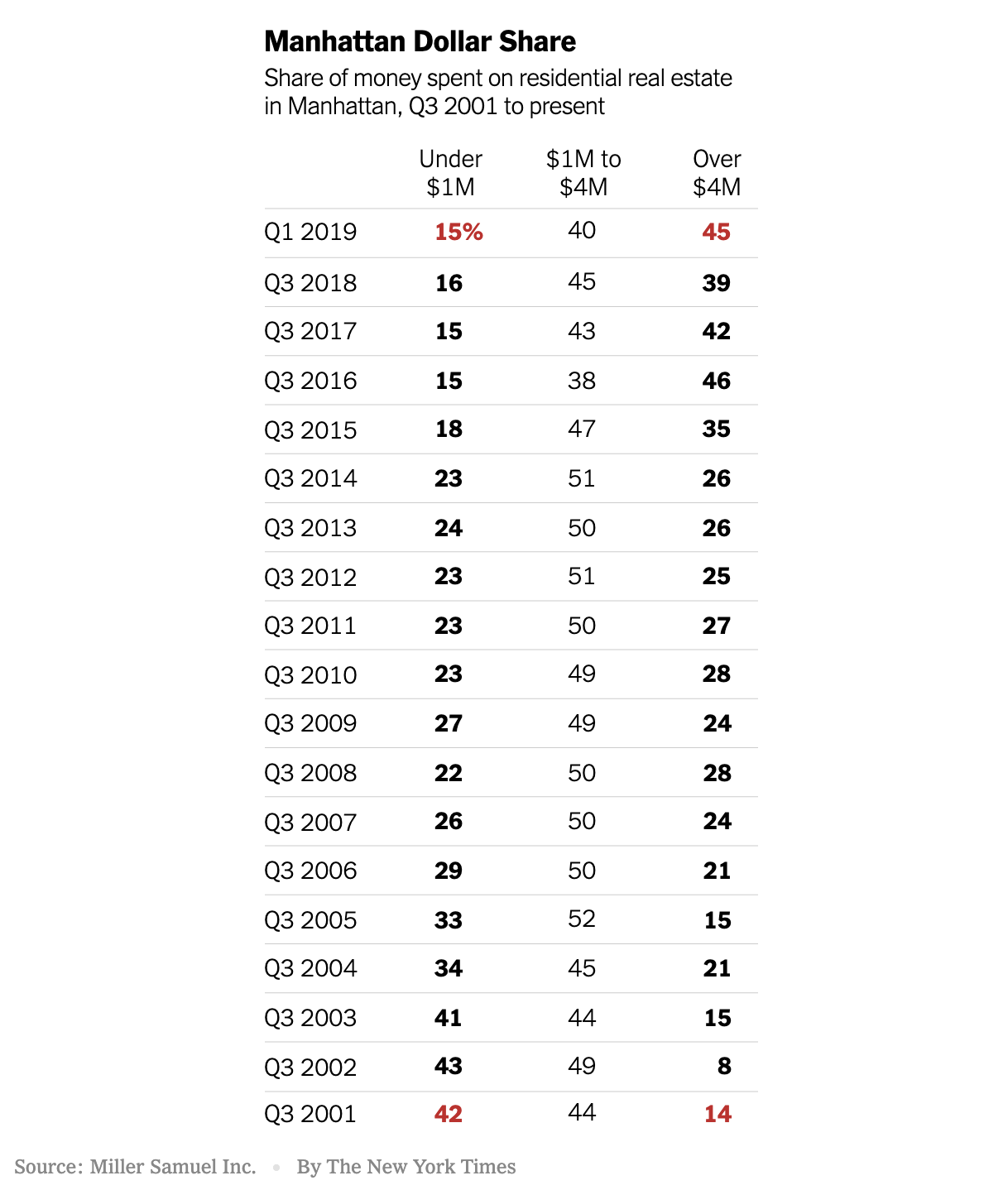 Billionaires Row Continues to be Challenged

It’s been no secret that super luxury Manhattan sales have been the hardest hit segment of the market since 2014. The slowdown is related to the oversupply of new development created from the vast amounts of capital looking for a home since the financial crisis. Perhaps the most famous representation of the super-luxury market has been “Billionaires Row” centered on 57th Street in the heart of Manhattan’s central business district in Midtown Manhattan. The introduction of supertalls to the skyline has provided never before expansive views to the buyers.

I was asked by the New York Post to provide a snapshot of this submarket. Since contract data is not public record and is easily manipulated, I estimated the state of the key buildings as best I could, using ACRIS for closed sales, Streeteasy contract tags, and feedback from market experts in and around the brokerage community. The result was really no surprise to anyone in the real estate business but because it was concentrated in one place, the story went viral. 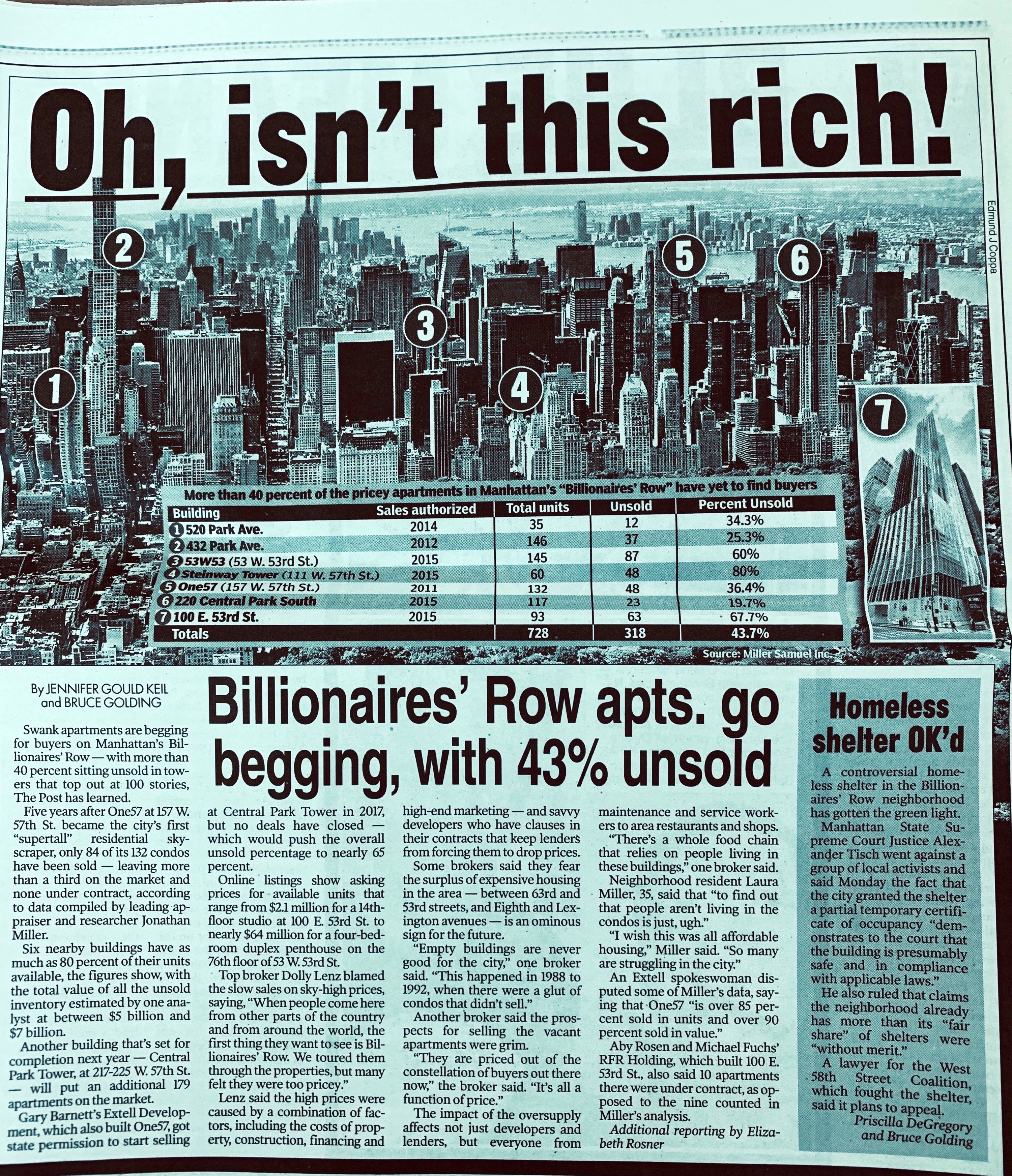 Now its time for me to confess. I read the online NY Post article just as I leaving for the airport to speak at an event in Florida. After I arrived at the gate, there was a newsstand with a fresh copy of the NY Post so I bought it to read it on the plane. But I bought it because of the cover story and never gave a thought to the “Billionaires Row” story. After I read the Anthony Weiner story I spotted the ‘Billionaires Row’ Story and saw that it included a table not in the online version. Took a picture of the table and included it above.

Last year I was interviewed for (and might be included!) in the new book “Moneyland” by author Oliver Bullough. My copy is coming next Tuesday but the topic of kleptocracy fascinates me and I have learned over the past five years that it is far more widespread than people realize.

Oliver was recently interviewed by Terry Gross on NPR. 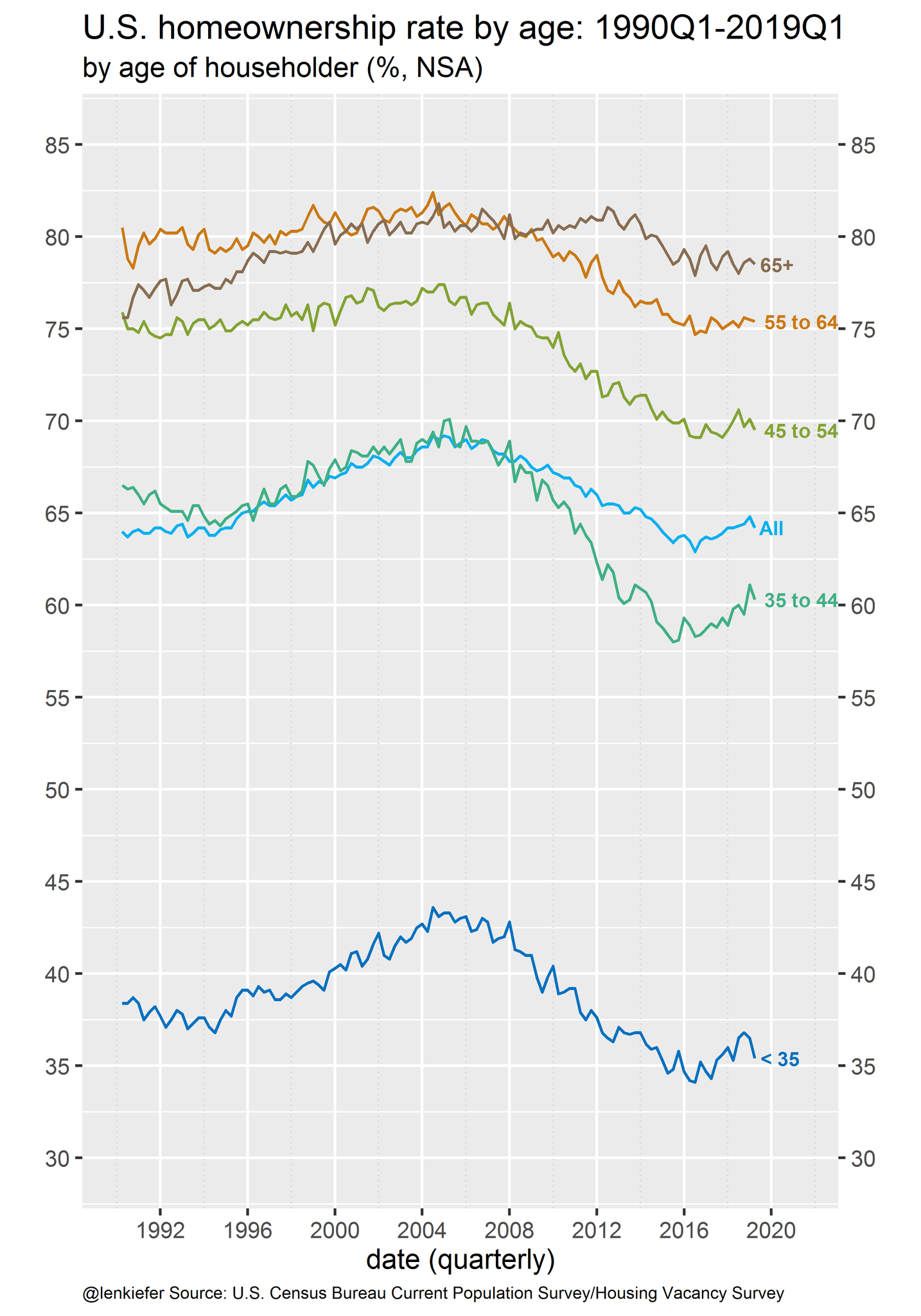 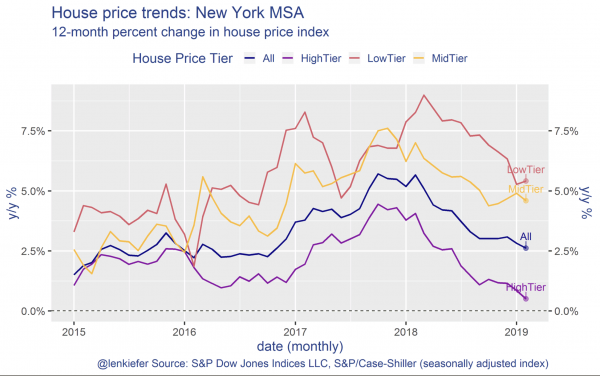 There was a great podcast last month from Planet Money and the story sounded familiar.

AMCs are adding more and more services that are NOT appraisals. Automated valuation models, loads of hybrid products and yet, the cost of this service is higher than a traditional appraisal. The NPR show on Starbucks seemed like the perfect analogy.

I wrote this blog post on Saturday, so in case you missed it…

The bill summary was:

Yesterday Appraisersblogs ran it as a standalone post and I got a lot of feedback. To be clear, the bill was signed into law by Governor Andrew Cuomo at the end of last year and became effective 120 days later which is today.

Here is the NYS “AMC Law” as a PDF or in plain text on the landing page of the law.

The NY State Coalition of Appraisers (NYCAP), led by my friend and appraiser Becky Jones who along with other unnamed heroes worked hard to help make this possible, wants you to know that this law was not a last-second, fly by night effort as being characterized by The Real Estate Valuation Advocacy Association (REVAA) – the trade group that represents the bulk of the AMC industry in the U.S. – inferring this law was flimsy and easily overturnable.

No, it isn’t. Its been a long road and achieved unanimous consensus during the process.

When the draft of the bill was approved by the NYS Board of Real Estate Appraisal, Carol DiSanto who is the Vice Chair, walked it across the street to The New York State Association of REALTORS (NYSAR). In effect, REALTORS of New York State were made fully aware as the “draft” became part of NYSAR record at their next business meeting. Becky Jones sat on the Legislative steering committee at NYSAR and informed them about the bill. They had no objections to the bill before submission to the state legislature.

A similar proposal was introduced by the New York Department of State in 2015. Senate Bill S9080 was introduced two years ago during the 2017-2018 legislative session, signed into law on December 27, 2018 and became effective today. The voting was unanimous in favor by the rules committee of both houses and the body of both houses.

Here are the vote tallies (the same in both the NYS Senate and Assembly):

And here was the timeline: 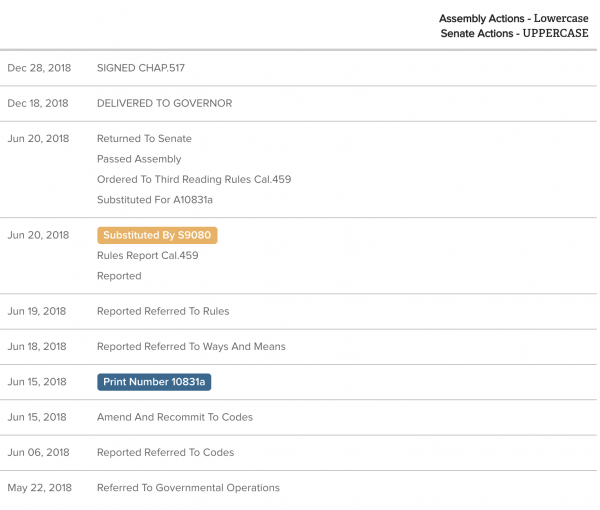 A couple of AMCs we work with for some private banking groups sent emails to us yesterday: 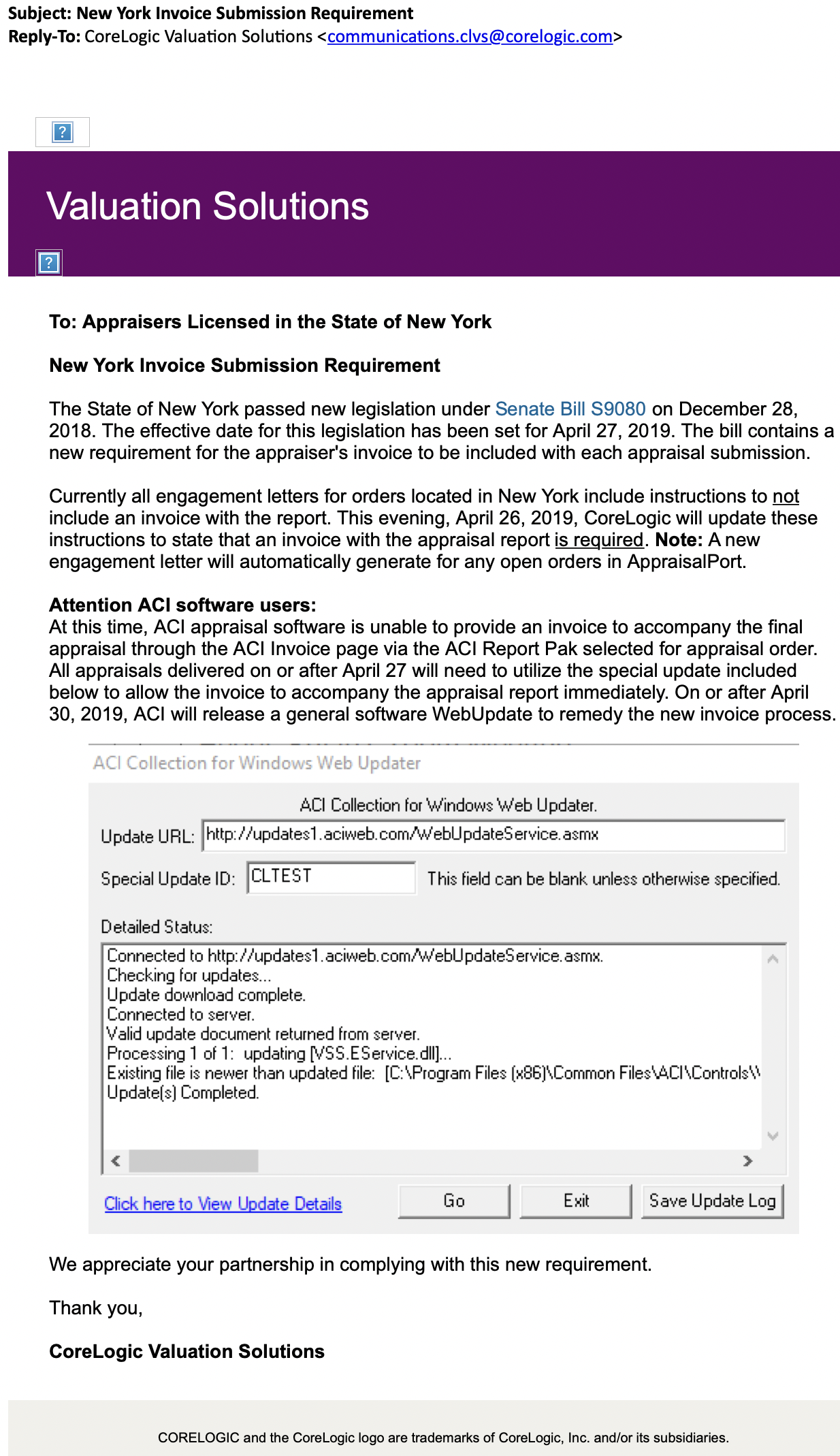 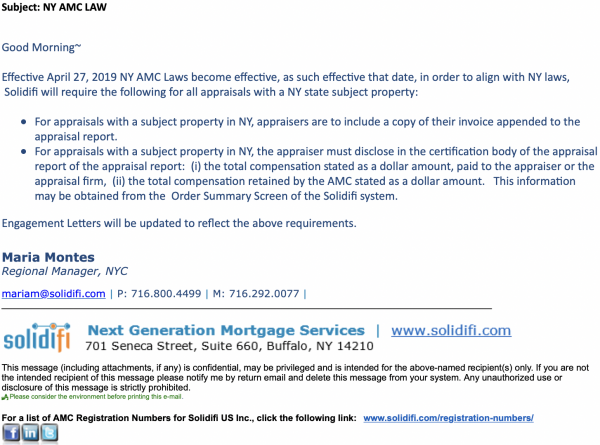 Remember that the word "modern" or "modernize" is code for AVMs, settling for less accuracy and getting rid of the #appraiser – @ClearCapital debuts its new modern appraisal program @MPAMagazineUS https://t.co/CTyZQ8sH6H

It is ironic that the New York Governor, who was the creator of HVCC when he was NYS Attorney General and was a board member of a former Ohio-based AMC owned by a friend that eventually collapsed, leaving many appraisers unpaid for their work, was the signer of this law. Despite the irony, his concern for the consumer is incredibly appreciated by the appraisal community who have been beaten up by the AMC industry since 2009 under the false narrative that they are embedded in the process to protect the system. In reality, AMCs gave the mortgage system an empty promise that left the consumer and the taxpayer exposed to excessive costs, bureaucracy and a systematic deletion of quality. Even worse, they stole the economic livelihood of the actual market valuation experts and replaced them with form-fillers.

It is nice to see a state pay more than lip service to consumers within the mortgage business.

Great piece on what happens when a factory closes down and was the dominant source of employment. Click on image for the story. 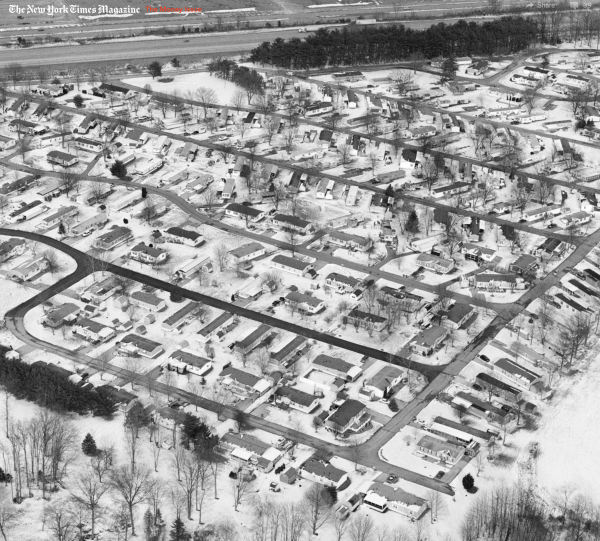